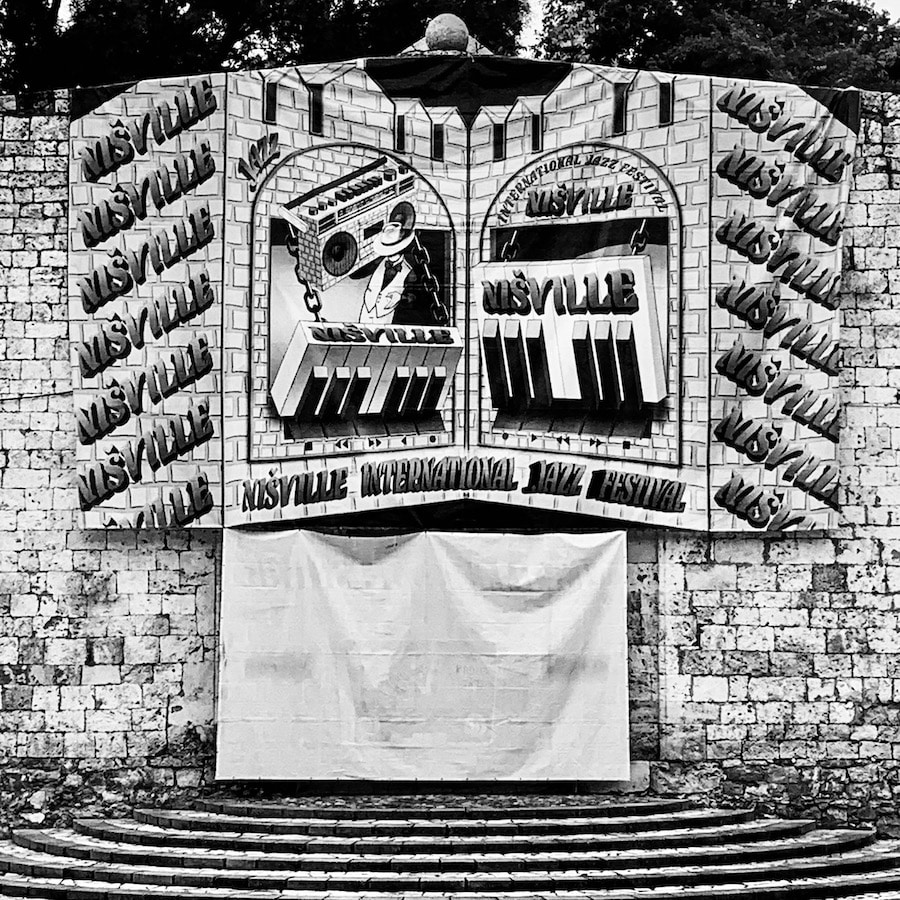 For this 25th edition, (2020 and 2021 having been somewhat disrupted for reasons we know) the Nisville Jazz Festival, has gathered this year again, a joyful crowd of all generations, within the Ottoman fortress, green lung of the agglomeration.

To get there, all you have to do is cross the bridge over the Nisava River from the city center.

The fortress of Nis, an old Ottoman military defense, encloses a park containing archaeological remains and many species of trees. It is pleasant to stroll around at different times of the day, as well as during the warm summer evenings. When evening falls, the place comes alive from 19H with various musical scenes, some of which do not turn off the sound and lights until the end of the night. 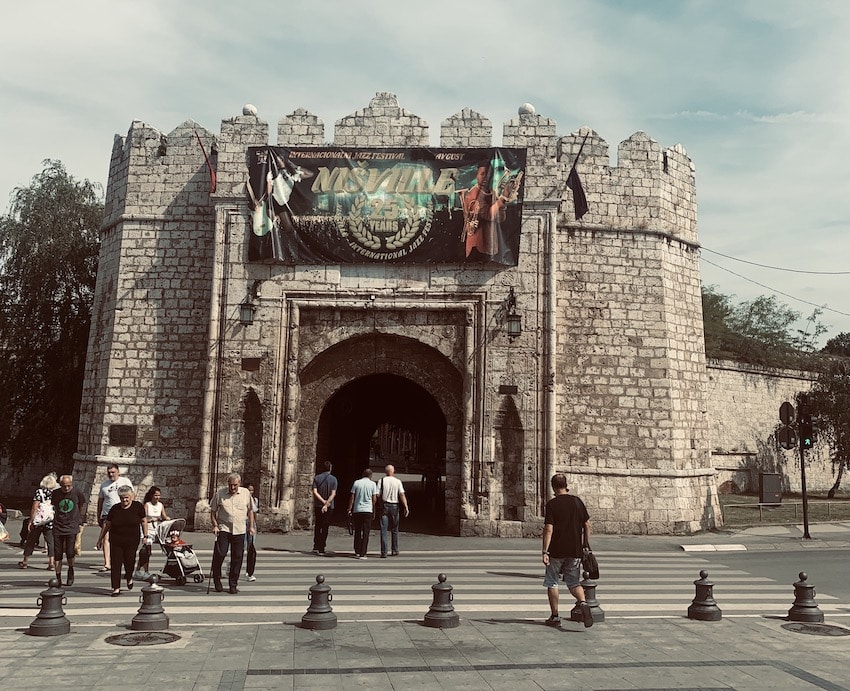 The word festival takes on its full meaning here: the crowd strolling the alleys and lawns clearly comes here to party, while families take the evening air, the tunes of different types of music float from one place to another, in a sometimes joyful cacophony.

In short, the 24-hour venue is naturally “the place” to hold a music festival.

While during the day, the cafés under the pines and the leafy trees are calm, the music of the birds in the forest brings calm and sweetness before the surge of amplified music in the evening.

The Main Stage is a large platform where the stands and the bleachers are arranged to provide lighting, sound and to welcome the spectators who are free to take seats, walk around or stand at the foot of the two stages. No metal barriers constrain them and everything happens in a relaxed way.

The logistics are first class. The two stages allow the concerts to take place every hour with almost no interruptions, among other things for technical reasons of stage changes. The sponsors, beer brands and even American cigarette companies (!) close the circle allowing the festival-goers to drink, eat or catch a lung or throat cancer. Question of choice.

The stage lights up and the Festival starts with the Nisville Rojaze Band, as part of the Rojaze project, an initiative that brings together Roma (and non-Roma) musicians from Belgium, France and Serbia. These bands perform in different festivals in these three countries: “Balkan Trafic” in Belgium, “Welcome in Tziganie” in France, and therefore in the opening of the Nisville Jazz Festival. 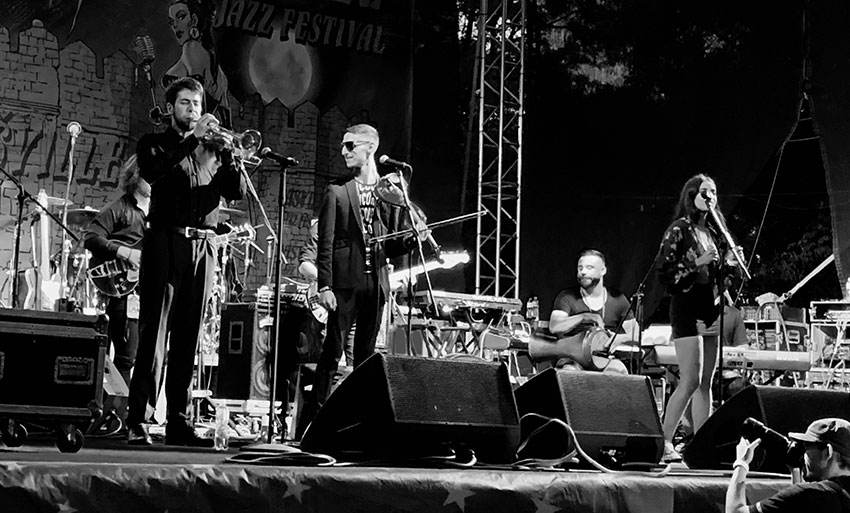 A jazz-rom fusion that also integrates rock elements and traditional Balkan music, thanks to a guitar with saturated riffs served by young virtuoso musicians without complexes, with strong personalities, to integrate and jump from one genre to another, from one measure to the next in a way as sudden as unexpected.

Then comes the turn of Beti Djordjevic, local pop singer with fifty years on the stages of various festivals of the former Yugoslavia in Nisville Jazz Festival.

This band from Thailand conquers a part of the audience with its eclectic, electric jazz fusion. I admire the energy and the enthusiasm of this colorful and spicy band. But I am still hungry… 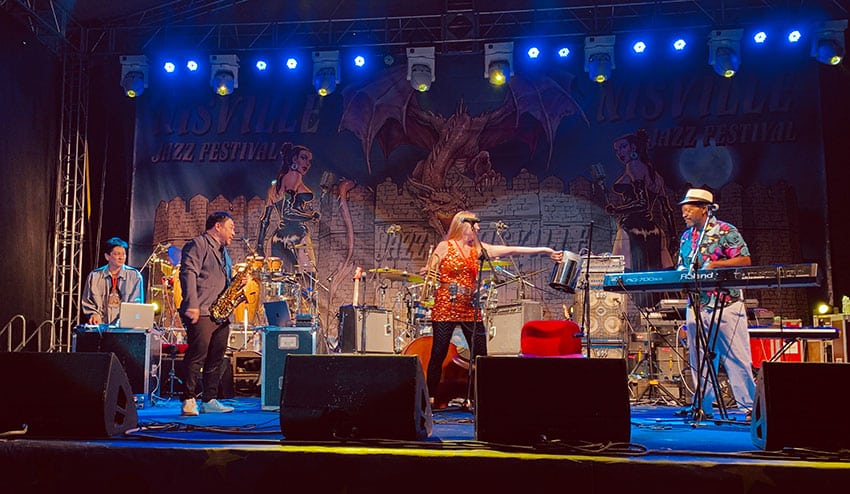 The virtuoso guitarist with his own universe, Kurt Rosenwinkel after a career of thirty years and more than ten albums as a leader to his credit, is no longer to be presented.

The way he takes there, with always so beautiful melodic lines, is a jazz popisant mainstream, which thus pleases the public come in number, to listen to it in the Serbian fortress.

I am conquered and impressed by the fluid playing of Pedro Martins, a young Brazilian guitarist, whom we will hear about in the years to come. (He won the Montreux contest as best guitarist 7 years ago). 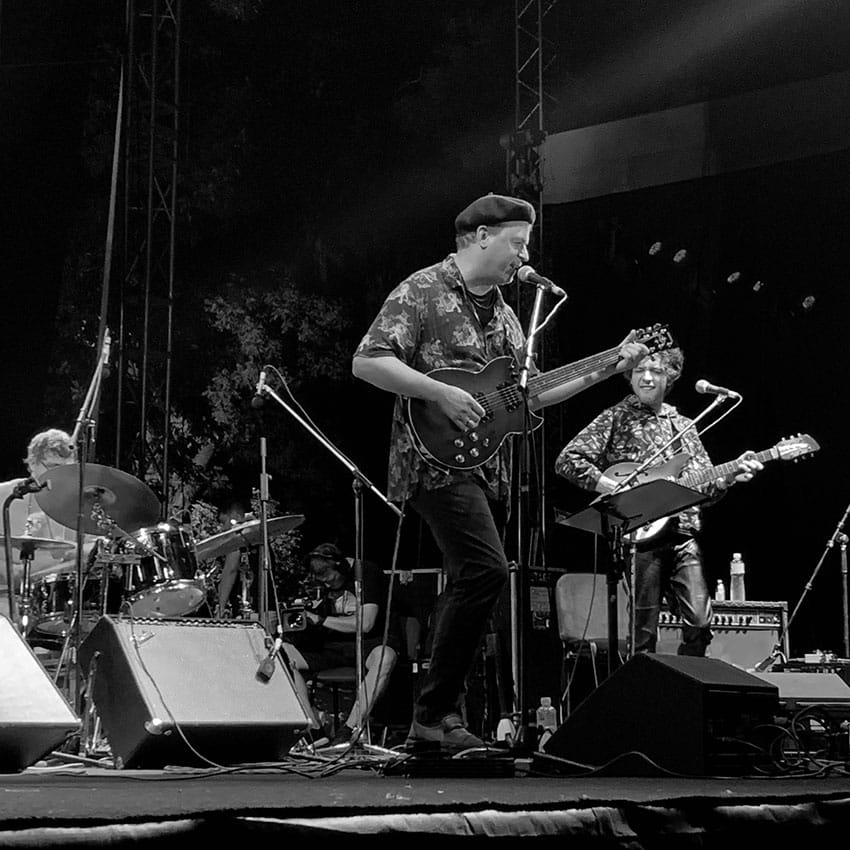 I then take the opportunity to slip away from the main stage for a moment and go to the “Kristina Movie Stage” where the audience overlooks a piano in the natural pit formed by the excavation of Byzantine ruins. At eye level, there is a white screen, where films are projected. 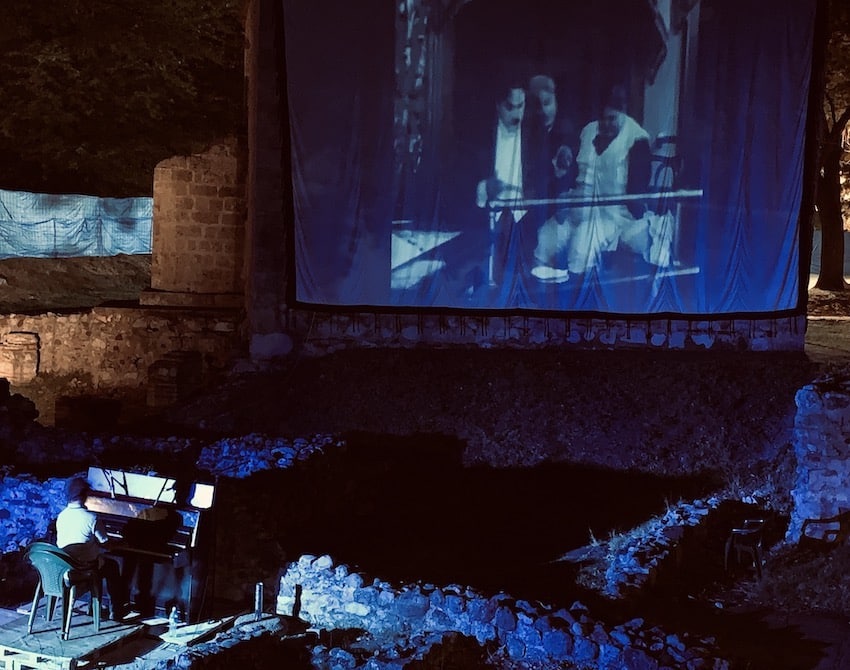 I listen to a young pianist, Aleksandar Stevanovic, improvising on a silent film of Charlie Chaplin. A moment of nostalgia, a whole universe recreated under this full moon sky. A true happiness in this magnificent and unusual theatrical setting!

My first evening ends with a brief visit of the various other pop, rock, hip-hop stages of the festival: “the Open Stage“, “the Midnight Jazzdance Stage“, reserved for the DJ’s in majority Serbian and Croatian, but not only. Or the “Hip-hop Stage“. 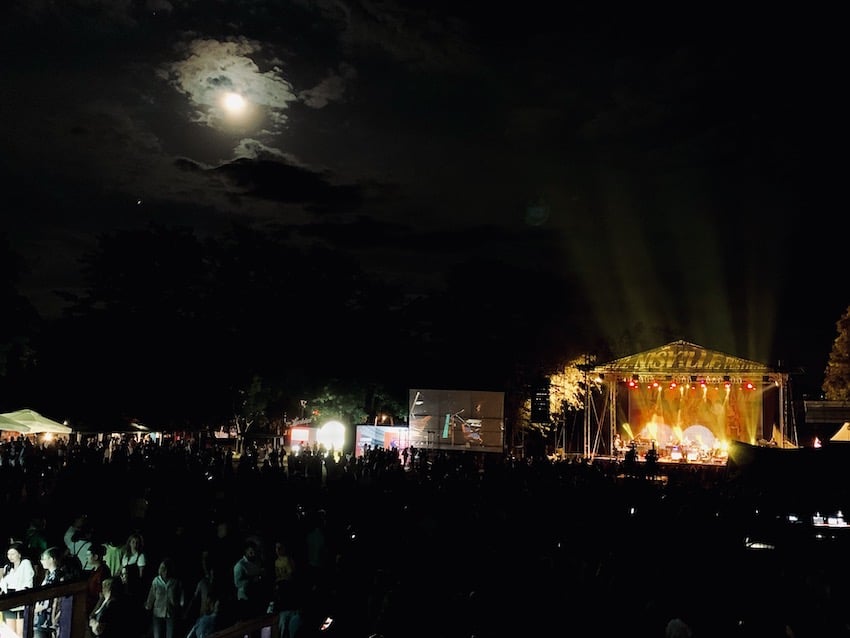 The full moon lights up the night of the Festival on a cloudy sky.

Some will leave the place like every other night, with the day rising. I was no longer there to see it.

Very nice opening for this second evening of the Festival with the Serbian drummer, Vladimir Kostadinovic, unknown in France but having played in jazz clubs and festivals on five continents. 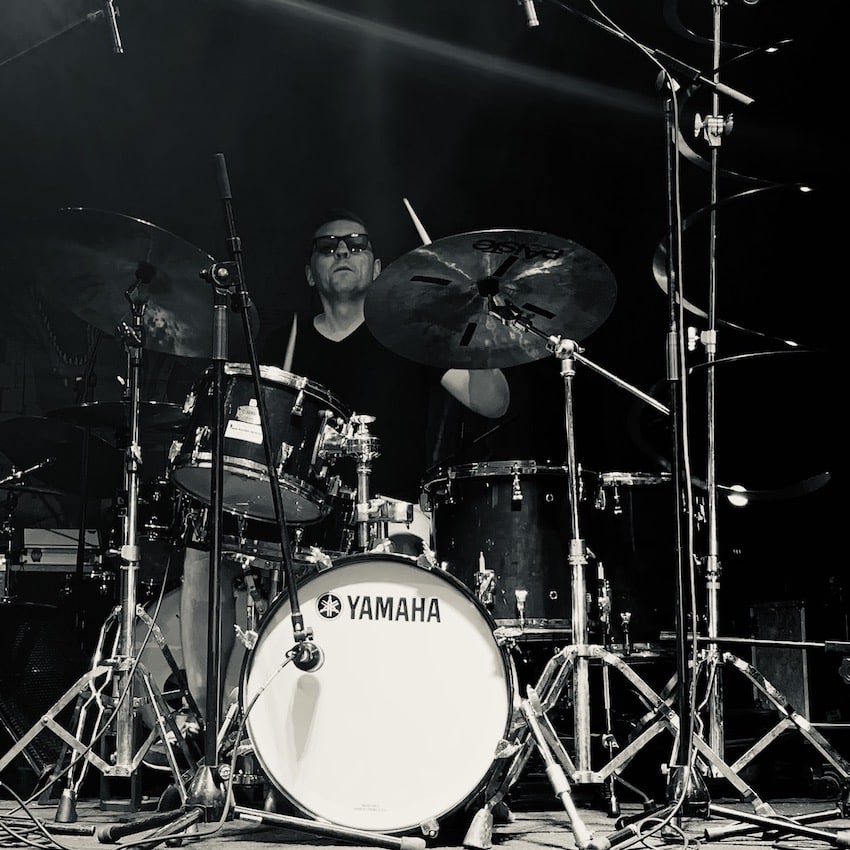 An opportunity offered by the Nisville Jazz Festival to listen to this very talented drummer.

His quintet of top Austrian musicians set the bar for this first concert at a high level. Impeccable groove, respect of the jazz tradition with a modern sound and a good walking bass. An appetizer all in elegance. 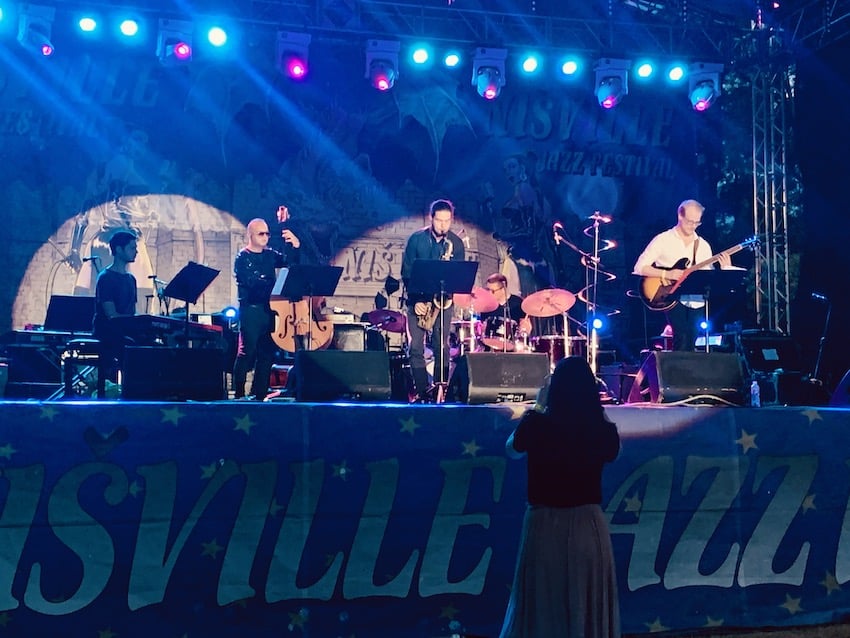 Mattan Klein, flutist and composer presented with his quartet his latest album, “The Long Run” released on the London label, Ubuntu Music earlier this year. The musician born in Jerusalem, a student of the Rubin Academy and Berklee College in Boston is inspired, like a large part of the Israeli scene, by the different cultural origins of his country, as well as the United States, the cradle of jazz, and Latin America, particularly Brazil, where some of his masters are Hermeto Pascoal, among others, or Chick Corea, whose tributes he paid with an emotion that the audience welcomed with undisguised enthusiasm. 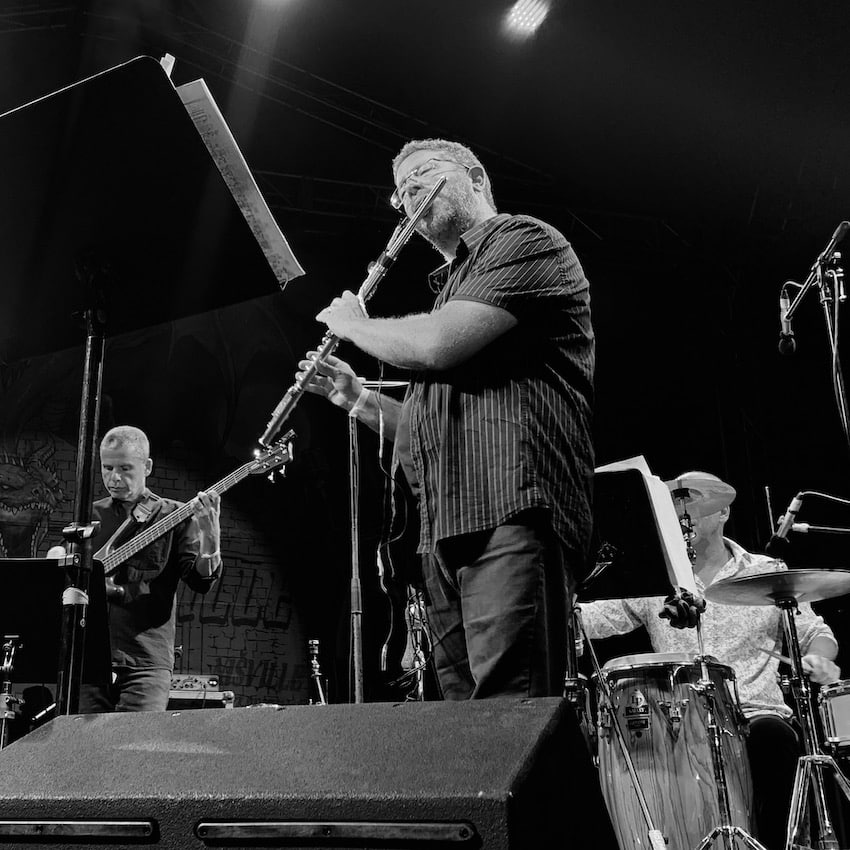 Mattan Klein is also a renowned teacher. He claims this role of transmission with vigor. His students over the years have become his jazz mates like the excellent young pianist Toki Stern.  To note also the performance of the excellent Yoran Oron on bass. 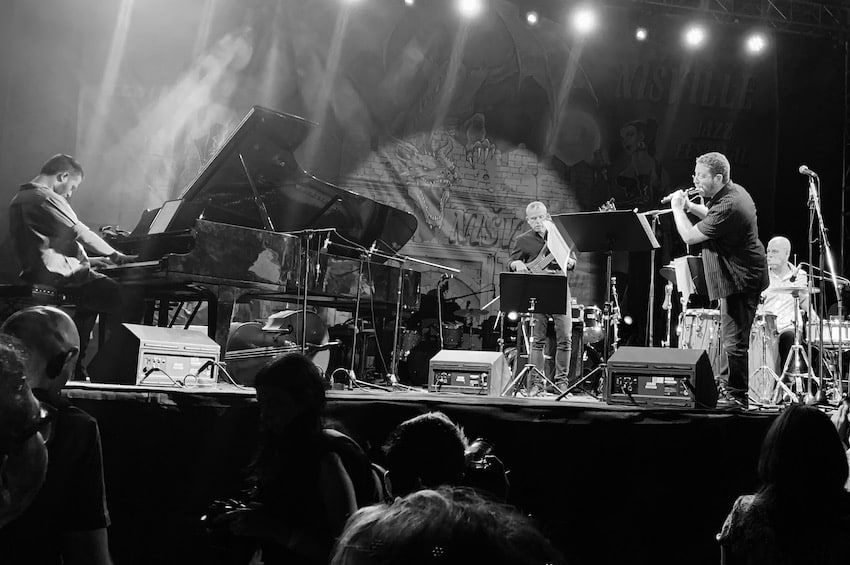 The writing is melodically and rhythmically rich. The quartet of talented musicians is tight and coherent. Mattan Klein, with his quiet virtuosity, leads the way with elegance. A magnificent discovery. An invitation, a suggestion addressed to the programmers of the festivals and the jazz halls of the hexagon. The atmosphere is charged with love and benevolence. The public smiles.

Rains then fall on the Nissville Jazz Festival. The public however equips itself and remains… 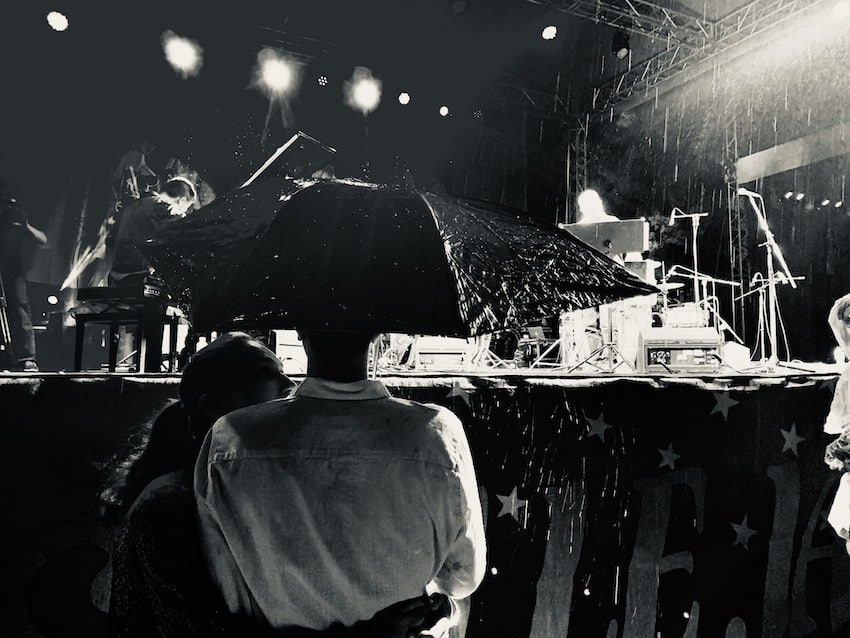 Kirk Lightsey, one of the greatest living masters of American jazz, an artist with elegant phrasing and a refined sound. The Detroit pianist performs here with the trio of Darryl Hall on double bass and Jason Brown on drums with tenor saxophonist Piero Odorici. 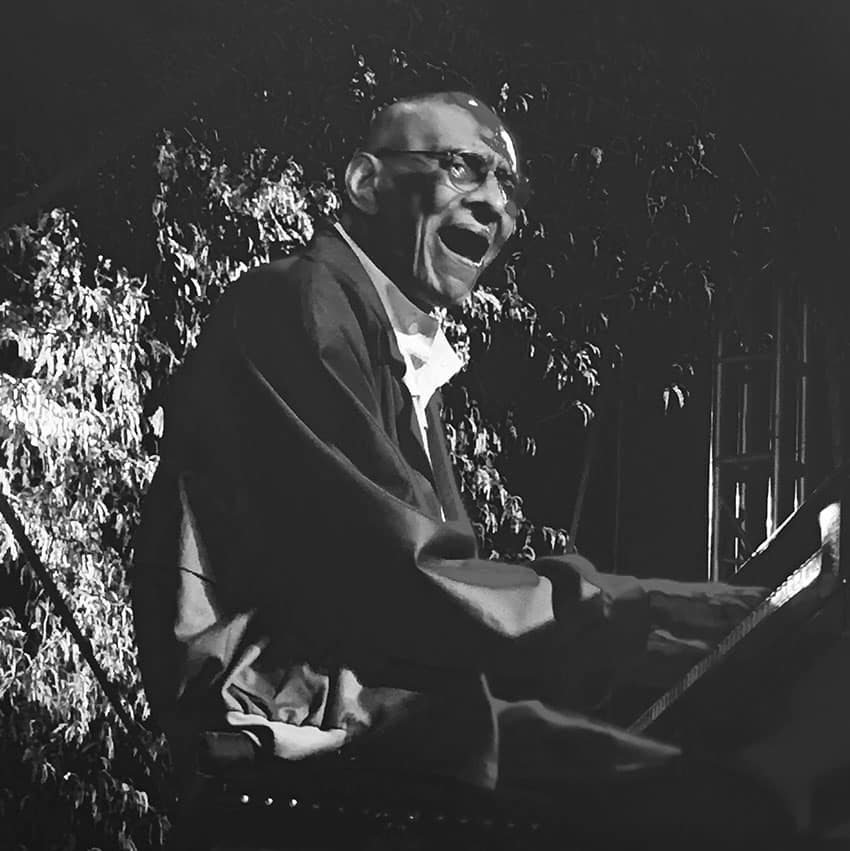 Kirk Lightsey, “Mr. Piano Man“, an iconic figure in jazz history, played and toured with Dexter Gordon between 1979 and 1983, becoming a member of the Leaders group.  He also recorded and played with artists such as Chet Baker, Bobby Hutcherson and many others. The rhythm section, double bass and drums, is first rate. Everything was in place for this memorable evening to offer a flying carpet to the melodic lines inspired by the saxophone of Piero Odorici.

A connivance and a real enthusiasm to play together was clearly felt throughout this memorable concert.

In spite of the rain that fell on the fortress of Nisville, the audience, first conquered, then in perfect communion with the artists, never wanted to leave the place. This video illustrates it well.

As the showers and lightning continue to break out in the Serbian sky, doubling in intensity, I am forced to seek shelter, then to get some rain gear to return to the main stage. This lack of anticipation makes me miss with regret the Jungsu Choi Tiny Orchestra, from Korea.

A jazz colored with funk, blues and swing. Perfect to start this Saturday evening. The Nisvillois are even more numerous to go out in spite of the still uncertain sky. 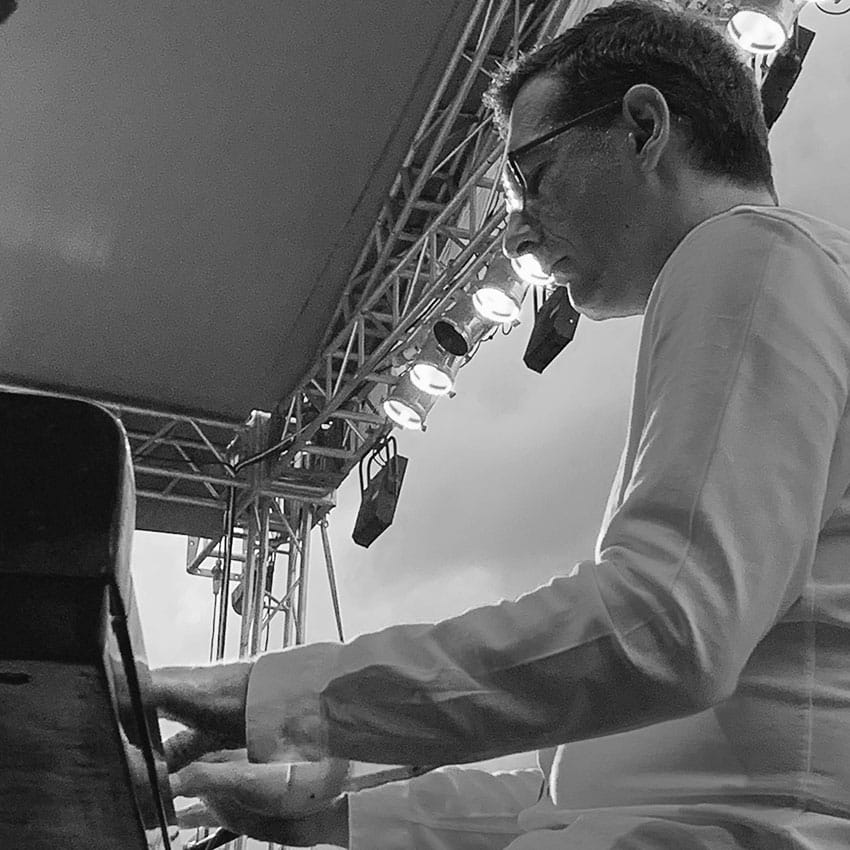 Milan Petrovic‘s quartet – on keyboards – is one of the most active jazzbands in Serbia. On the guitar, the North-Macedonian Saso Popovski offers some riffs with sometimes oriental sounds quite adequate. This is what we came to the Nisvile Jazz Festival for: other colors of jazz. We are served with talent. 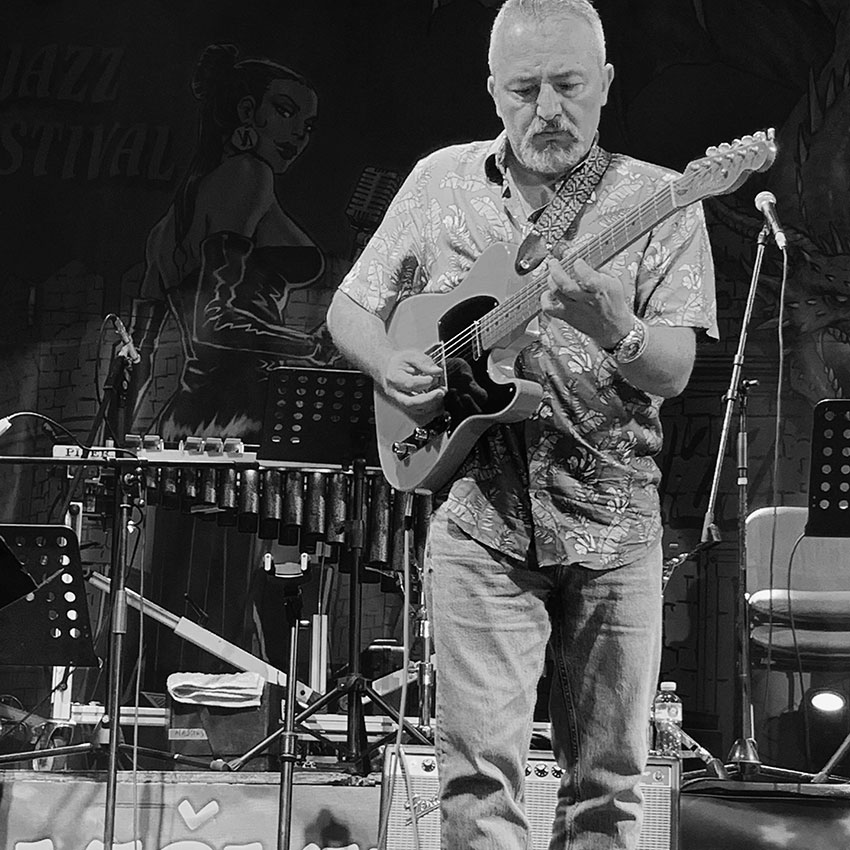 On the stage of the Youth’s Museum, at the entrance of the fortress, all the evening will follow the Groups, Belgian, French and Serbian of the “Rojaze” the “Roma Jazzing Europe“. The public is very receptive to the gypsy music and jazz fusions that the different groups perform. This Roma and non-Roma collective benefited from a ten-day residency, allowing fruitful exchanges between the three teams. 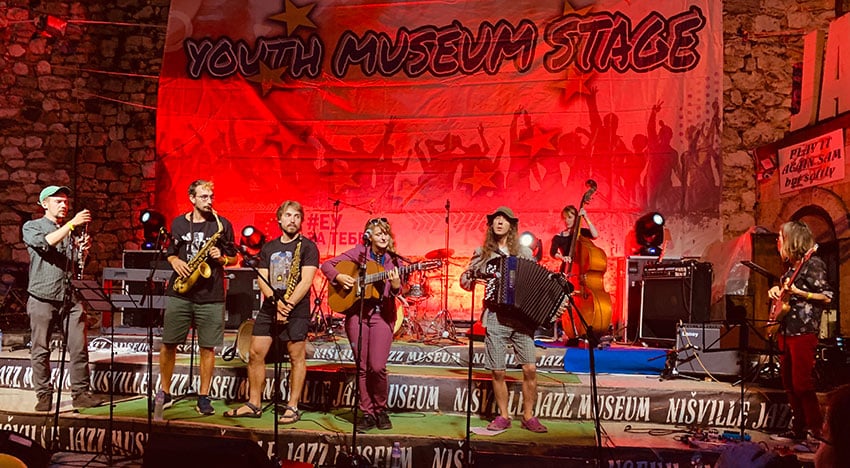 A première for this jazz pianist, conductor, composer and arranger.

The project is supported by the Polish Ministry of Culture as part of the celebration of “200 years of Polish Romanticism“.

The theme of this world premiere, presented for the first time at the Nisville Jazz Festival 2022, is the setting of poems by Adam Mickiewicz (first half of the 19th century). The soloists performing the sung poems are a Polish rock star, guitarist-singer Tomasz Organek and Natalia Grosiak, a lyric singer.

A Brazilian band that really gets you going (!) and excites your interlocutor as well as the audience, which is not mistaken. The drummer-composer leader Igor Willcox has come with a young, spirited and virtuoso musician on keyboards – he also sings very well: Erik Escobar. On saxophone, Wagner Barbosa also offers us dazzling choruses. 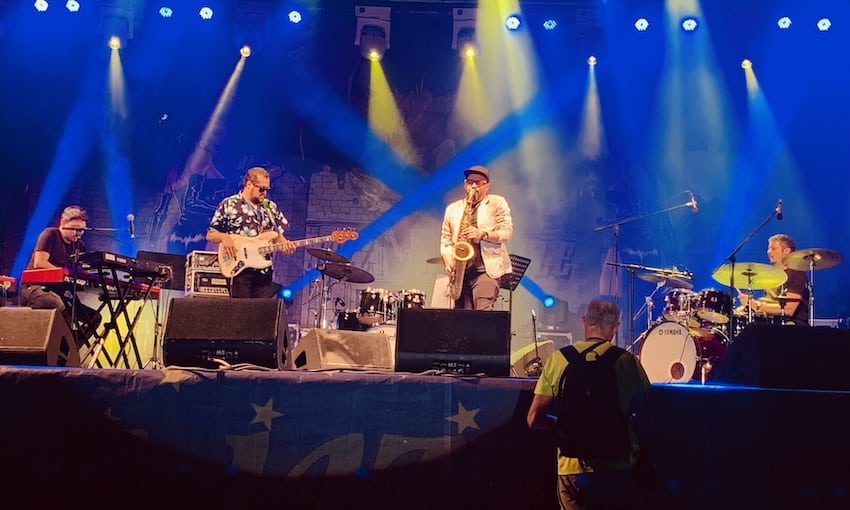 As for the unclassifiable bassist Glecio Nascimento, I would say that he is unjustly ignored in our regions of Western Europe. 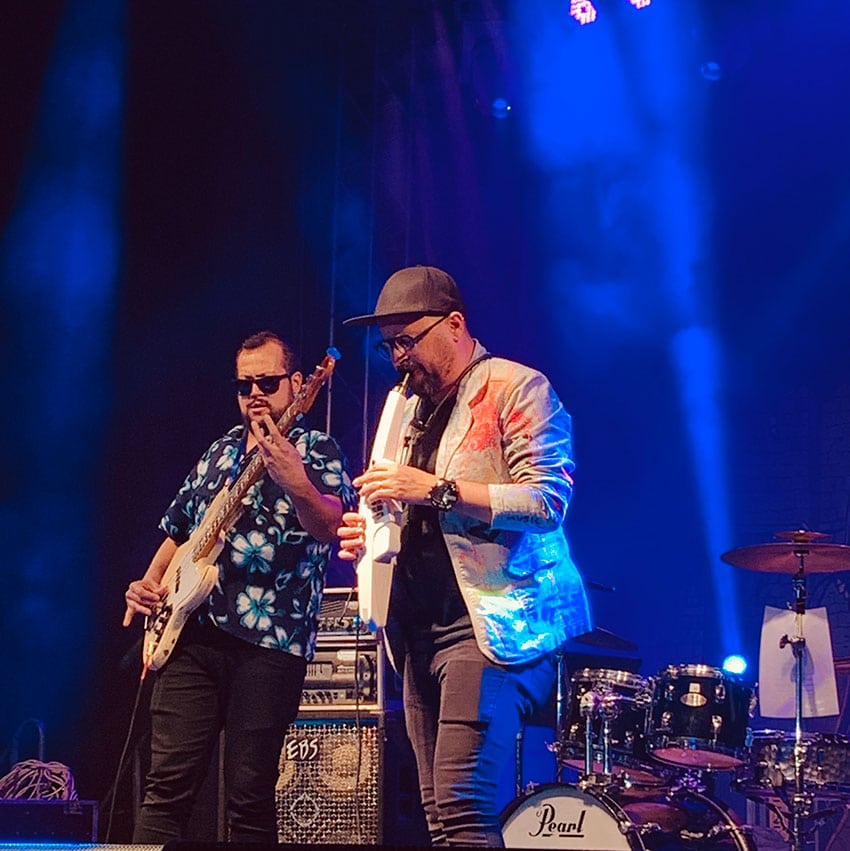 A jazz fusion of which this one operates as much with a conquered public.

The Montuno band from neighboring Bulgaria follows for a melting pot of genres ranging from rock to variety through traditional Balkan music, barely touching jazz. The public seems delighted. To note the excellent pianist Pavel Tzonev.

Then around midnight, the highlight of the show is the long-awaited singer Natacha Atlas with the Dzambo Agushevi Orchestra from Northern Macedonia. It is a kind of unbridled gipsy brass band, full of energy and enthusiasm. To recommend for the kermesses and the thundering weddings. Natacha Atlas begins her singing tour with a song in French that delights the audience that is still numerous at this late hour.

I don’t have the courage to stay until the end and will not be able to attend the performance of the Serbian trio Slide Ride. 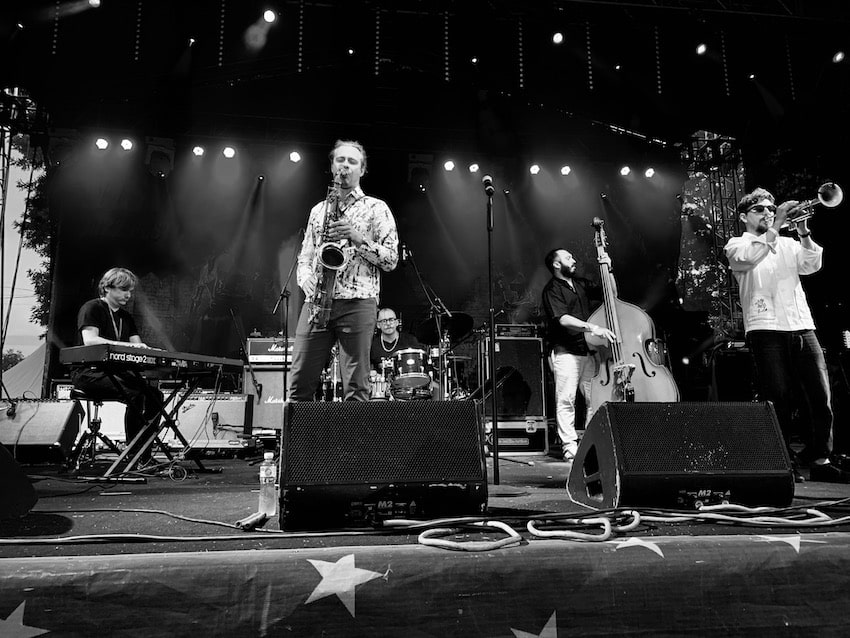 The legendary American band, Yellow Jackets, founded by guitarist Roben Ford, has been playing around the world for 44 years. Pianist and keyboardist Russell Ferrrante is still with the band and will be in Nissville again this year. 25 albums later – their next album is due to hit stores before the end of August – they are performing on the main stage of the Nisville Jazz Festival. 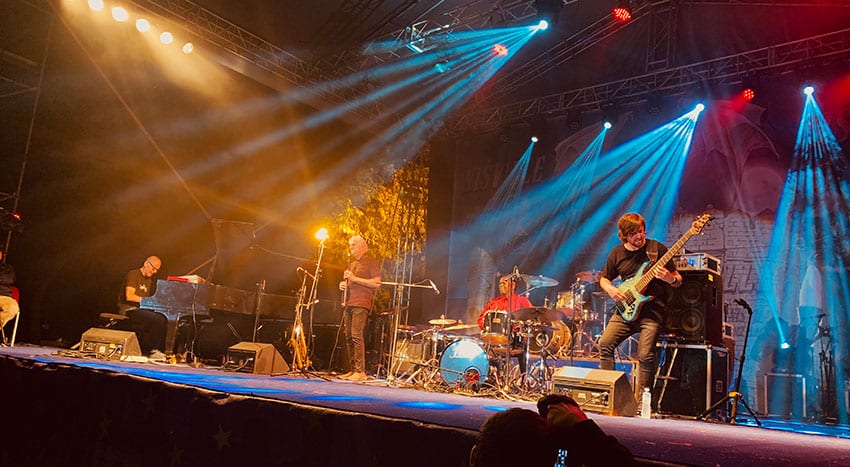 The famous saxophonist Bob Mintzer is also on the trip. Drummer Will Kennedy, another historical figure of the band, who was absent for a decade for personal reasons, is still active. He proposed when the bassist of the group took his leave a bassist native of Australia, Dane Alderson, to join the band. The interplay, the cohesion of the group is felt from the first songs. 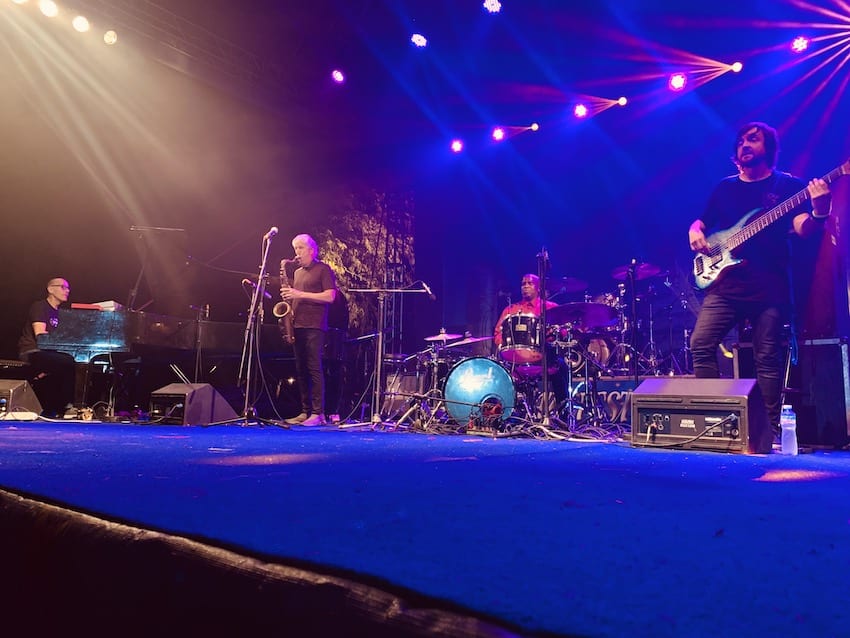 We go from swing to bop to jazz fusion, i.e. rock, to Rhythm & Blues. These different currents put end to end constitute in a way their trademark. The machine of rather old conception – which in jazz is certainly not a defect – remains always extremely well oiled. It is professional, efficient and also joyful. “We want to give people happiness, especially in these complicated times” confides Russell Ferrante in a press conference.

Can we talk about positive jazz? The concept may not exist yet, it remains to be defined. Successful bet, folks! 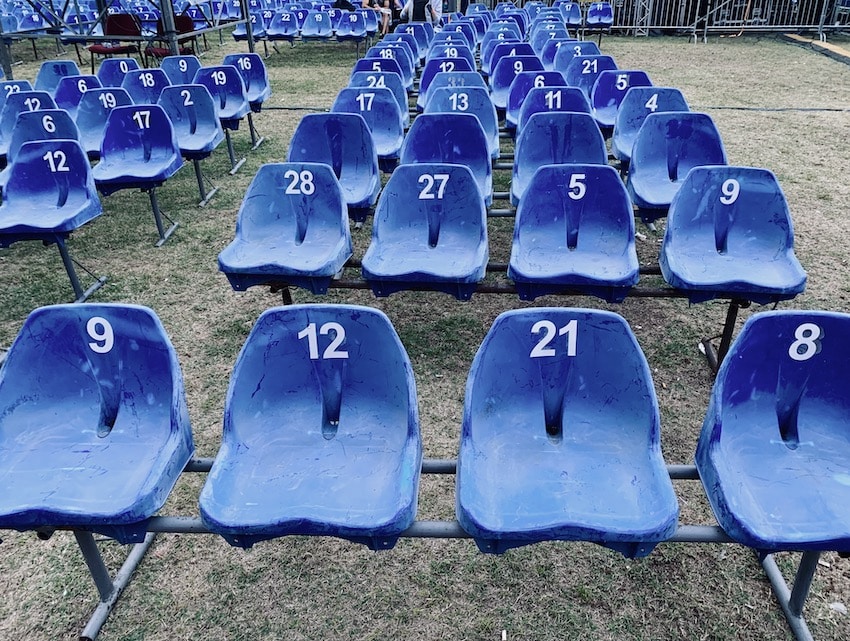 There must be a logic… Jazzy organization, free placement.