By Philippe COLLIOT20 August 2019No Comments 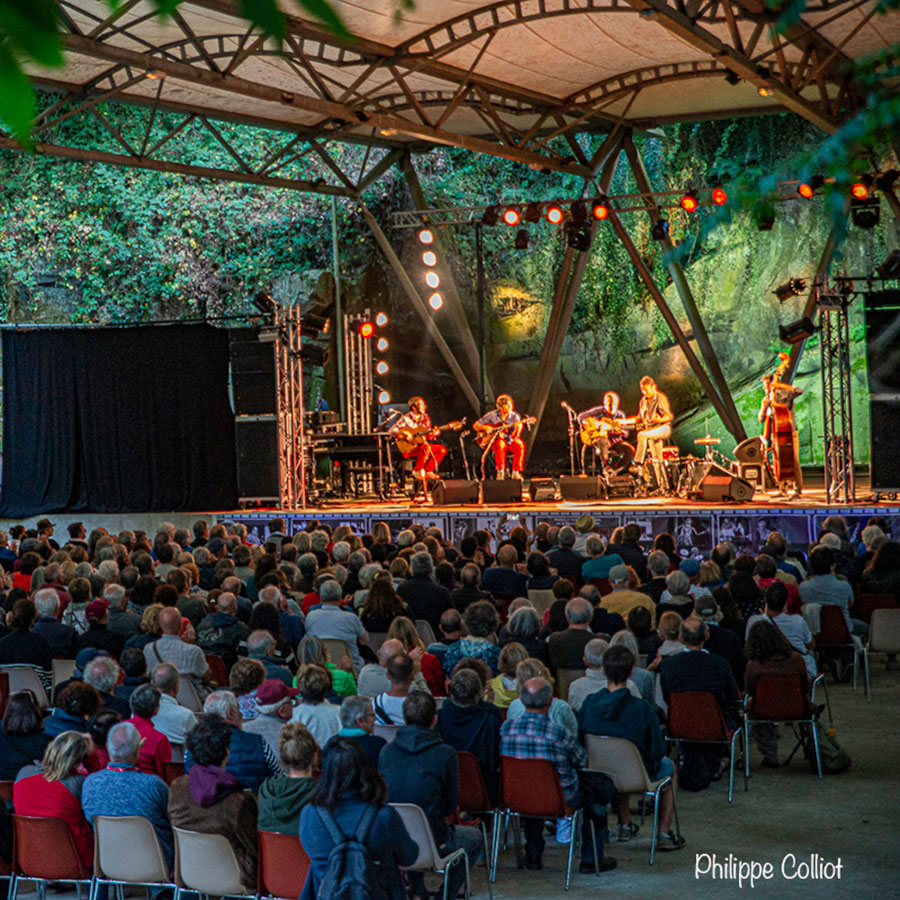 In Langourla, a small village in the Côtes d’Armor (530 inhabitants) has been running since 1996 a festival held for 3 days on a spectacular site, an old granite quarry, now called Théâtre de Verdure, (Green Theatre).

For this 24th edition, no revolution in form. The usual appointments are on the program:

-the Blues Jazz Amateurs Springboard (the winner ensures the opening of the festival the following year),

-the Master-Class, animated this year by Sébastien Giniaux around the gypsy guitar,

-two concerts each evening  at the Théâtre de Verdure

–Jam-Sessions at the Narguilé pub with the participation of artists scheduled for the evening and any musician wishing to “rub the stars”. This year’s jam sessions were hosted by Dexter Goldberg.

And it’s the duo Sébastien Giniaux-Chérif Soumano who opens the ball at the Théâtre de Verdure. The dialogue between the kora and the guitar makes us travel between two continents, two cultures thanks to these two virtuoso musicians. Magic of sound and lights, surprise live with a string of the guitar that breaks, giving free rein to a superb improvisation of Chérif Soumano. 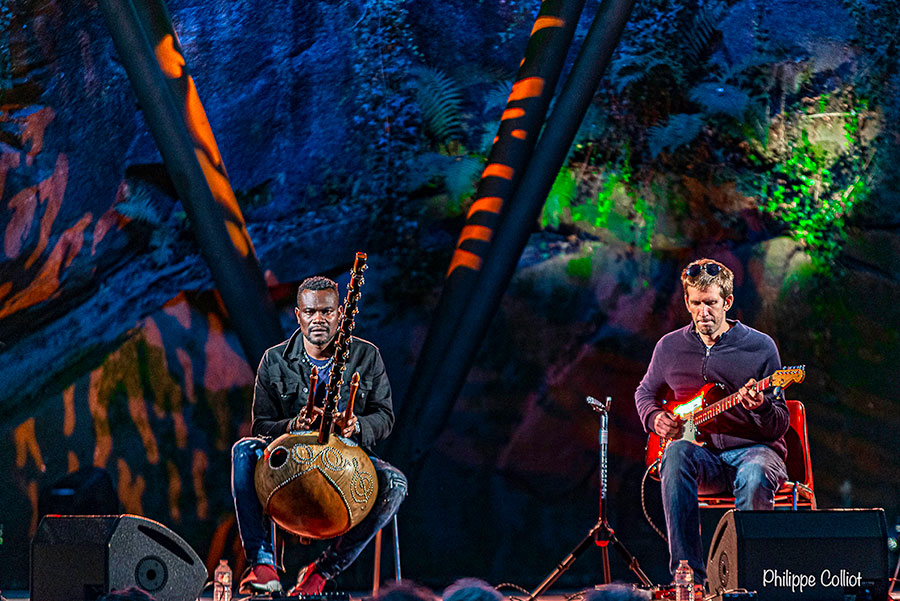 The second part of the evening allowed us to hear the Belmondo brothers again gathered since the beginning of the year. Eric Légnini, Sylvain Romano and Tony Rabeson are the rhythmic pillars. Tribute to Yusef Lateef at the beginning of the concert with an introduction by Stéphane to the conch. 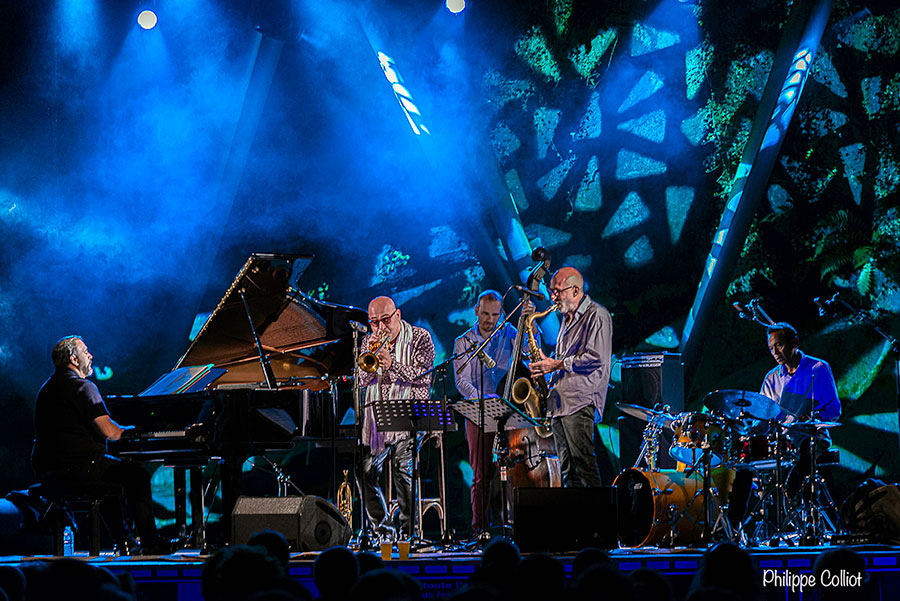 Tribute to Elvin Jones then, thus registering this beginning of concert in a very coltranian universe. His magnificent Stephane bugle and Lionel tenor sax, the rhythm section, but not that in tune, sound and lighting at the top. Just missing a few degrees celsius at the end of this concert! 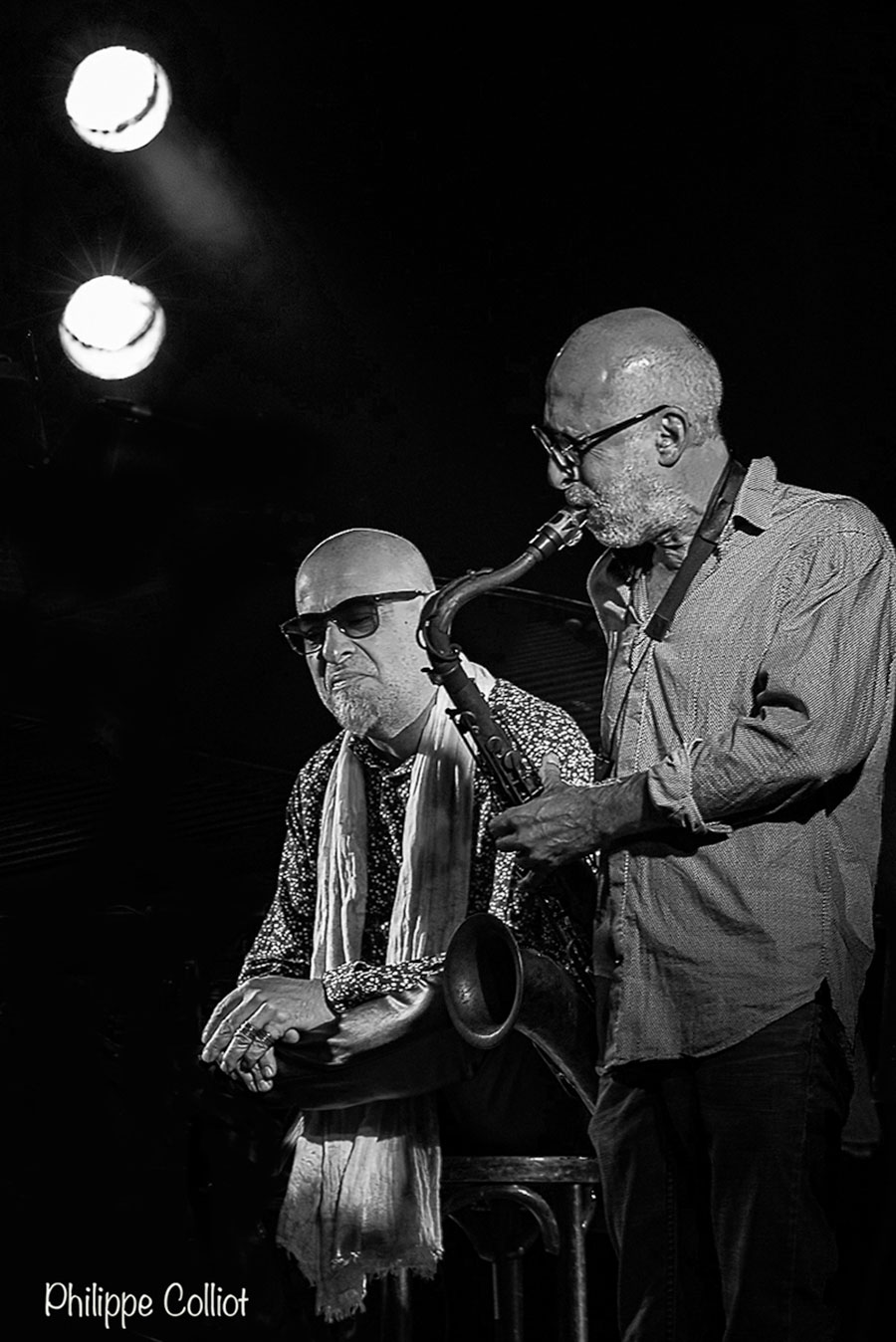 The second evening at the Théâtre de Verdure begins with the quartet of Claire Michael, multi-saxophonist (tenor, soprano, viola on a piece), flutist, singing. Surrounded by Jean-Michel Vallet on piano, Patrick Chartol on bass and Zaza Desiderio on drums, Claire Michael delivers music with varied and original climates. The shadow of Coltrane is also present this 2nd night, as well as the voice of Martin Luther King. The 4 musicians are fully invested in this program. Patrick Chartol and Zaza Desiderio gratify us with very high chorus. “The moment of happiness” is the title of Claire Michael‘s latest opus. This is the universe of this recording that was presented to us. More than a moment of happiness. 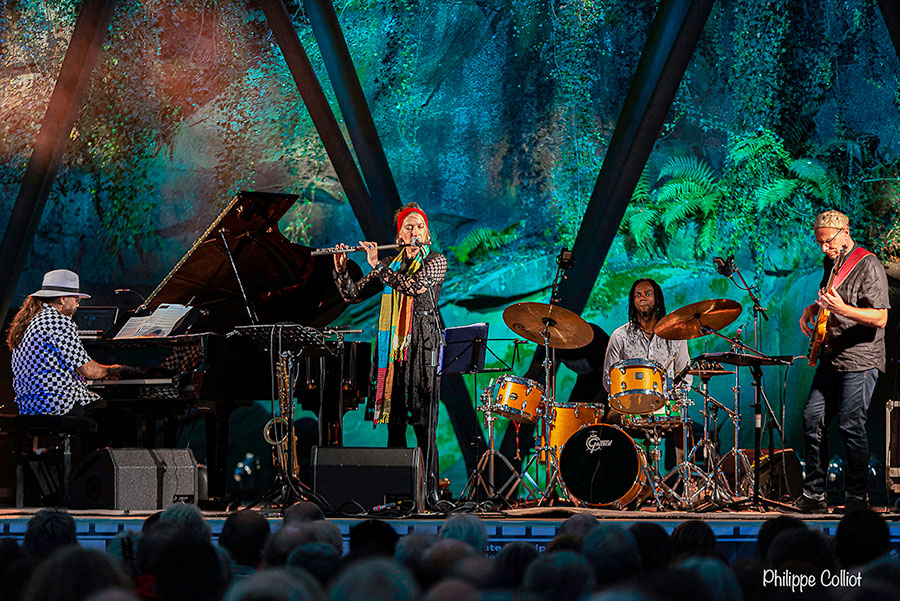 In the second half of the evening, the quartet of Brazilian trombonist Raul de Souza takes possession of the stage. Raul de Souza, 85, an emblematic figure of Brazilian music and considered one of the greatest jazz trombonists, played with Sergio Mendes, Milton Nascimiento, George Duke, Sonny Rollins, and recently with Ron Carter …. In short, a living legend of Jazz in Langourla! 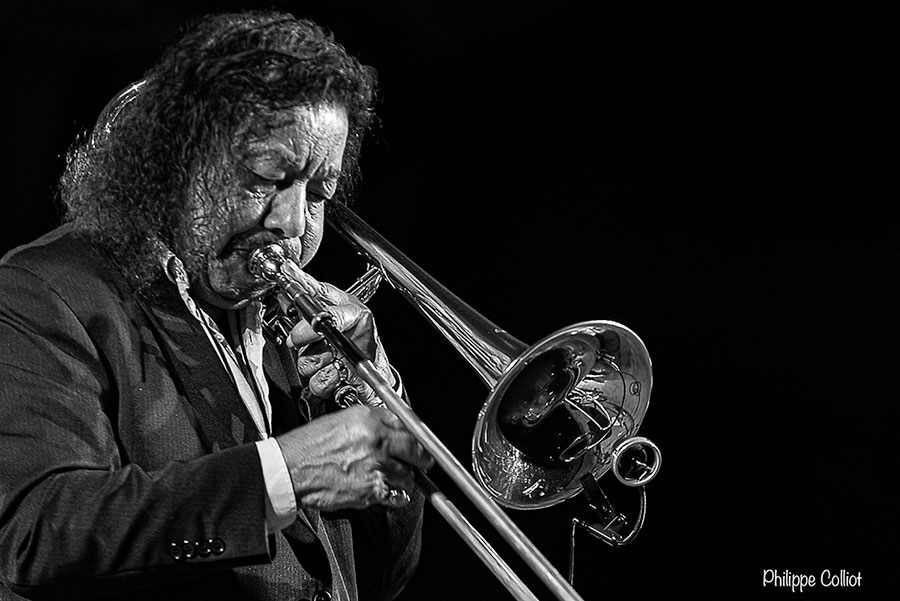 Remarkably surrounded by his young compatriots, Leonardo Montana at the piano, Glauco Solter at the bass and Mauro Martins at the drums, he presented us a good part of his last album “Blue Voyage” where appear his new compositions. Musicality, virtuosity, generosity … where the clarity of Raul, his ease alternate with the flights of his companions. Remarkable Glauco Solter who will dance with his bass during the whole concert, the smile hanging on the lips translating his real happiness to be on stage to interpret this music. For the last piece, Raul takes the tenor and also demonstrates all his ease with this instrument during a chorus on “Equinox” Coltrane (still him!). The reminder will see the return of Claire Michael and Zaza Desiderio on stage, in addition to Brazilian musicians. Standing ovation! 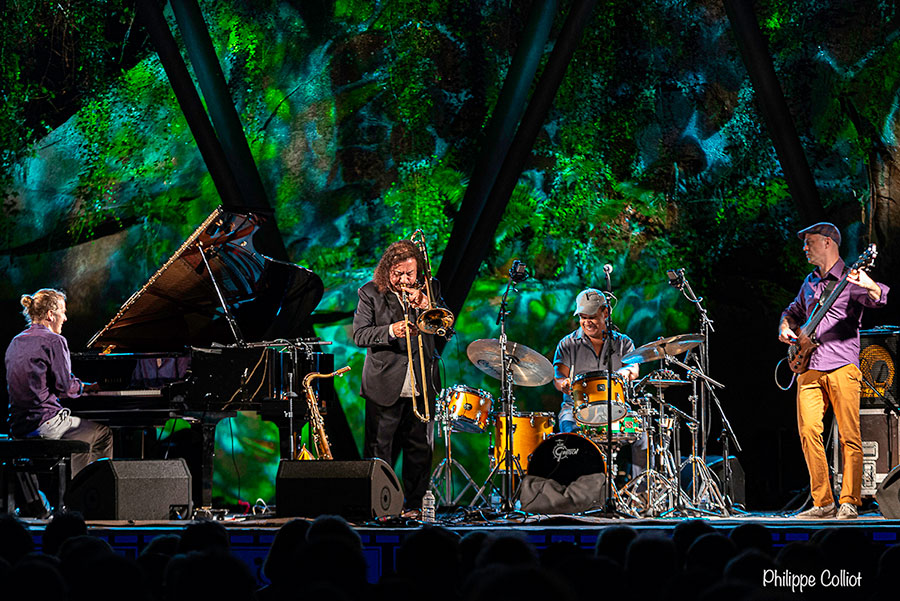 Les Doigts de l’Homme are on stage for the first part of the third evening. From an original repertoire composed of many influences, gypsy of course, but also from the Balkans, Africa, flamenco … the quintet most often distils a world music, festive, supported by arrangements and chorus of quality. The guitarist Benoit Convert is excellent at this exercise. Olivier Kikteff’s devastating sense of humor and clenching humor animates the links between the songs. 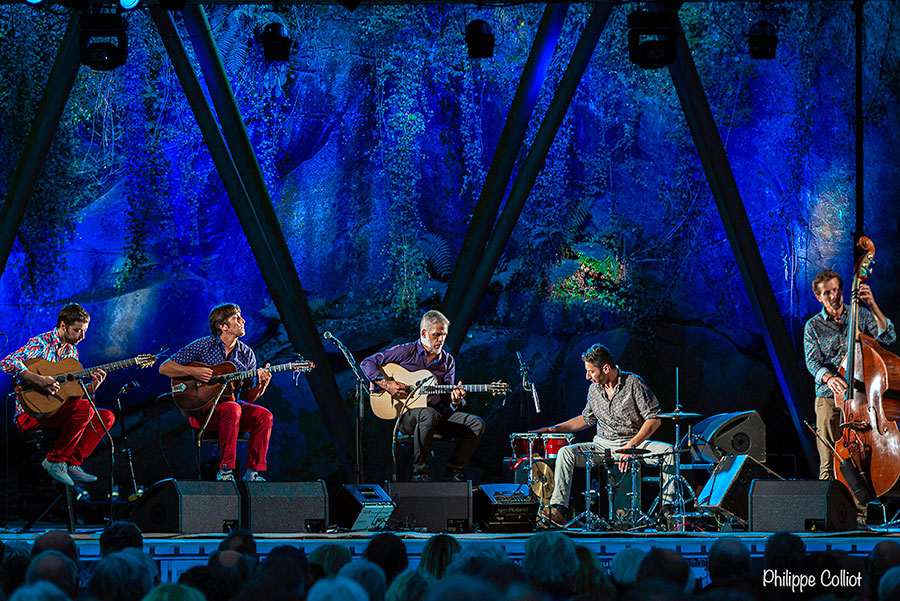 It is up to Sara Lazarus to close this 24th edition. To do this, she is surrounded by a dream team: Alain Jean-Marie on piano, Gilles Naturel on double bass and Philippe Soirat on drums. Swing is ubiquitous and Sara sets the standards for her mentors. 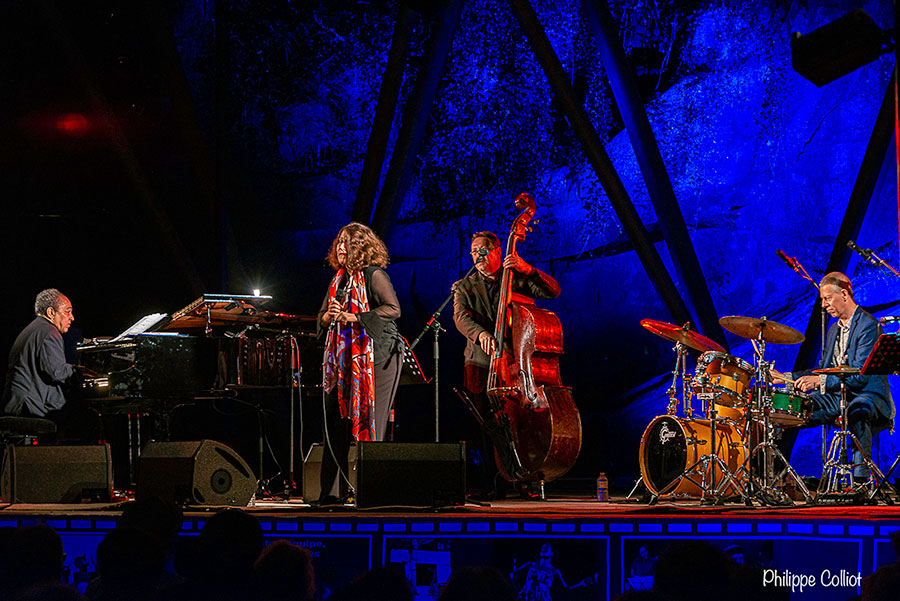 More than the scats and Sara’s choruses who did not fully convinced me, it is the interpretation of the themes with her sober and clear voice and the place she left to her companions who won my adhesion. 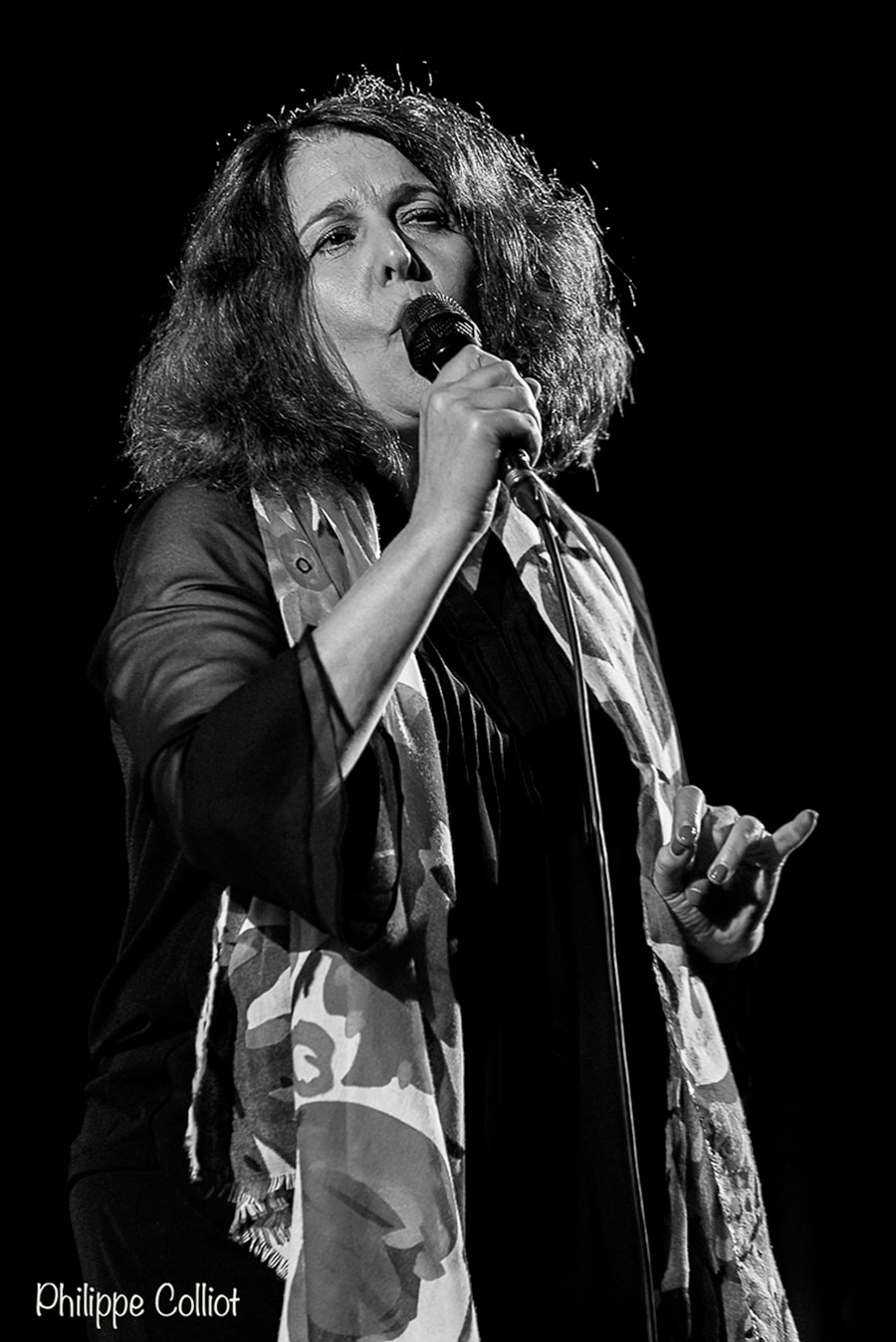 At the end of this last concert, Marie-Hélène Buron, president of the association that organizes the festival, closes this edition and makes an appointment for the 25th anniversary of this festival next year. The 2020 edition should have surprises.