By Jacques PAUPER8 February 2022No Comments 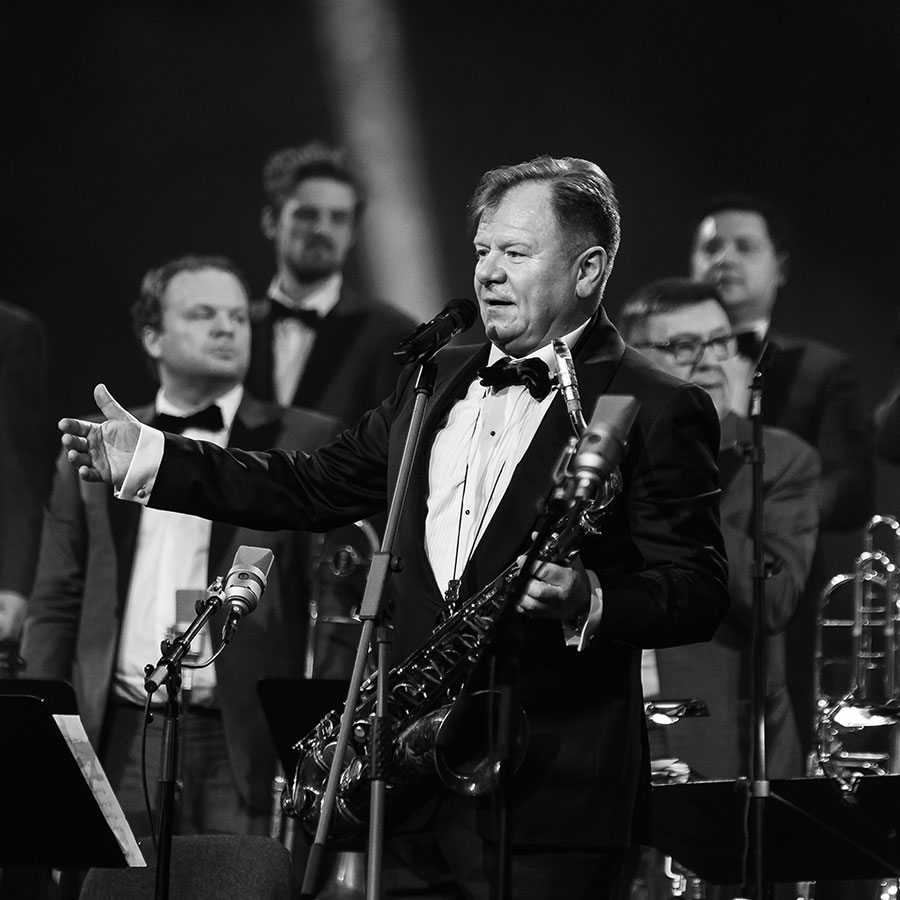 The famous Russian saxophonist Igor Butman, accompanied by his Big Band, the Moscow Jazz Orchestra, celebrated his 60th birthday in the Moscow Kremlin and took the opportunity to invite his friend Winton Marsalis who took the stage with his own Big Band, the Jazz at Lincoln Center Orchestra. Both men were celebrating their 60th anniversary.  The event took place on October 27, 2021, in the huge hall (6,000* seats) of the State Kremlin Palace.

This jubilant and mega jazz concert was a rare and exceptional moment for several reasons: 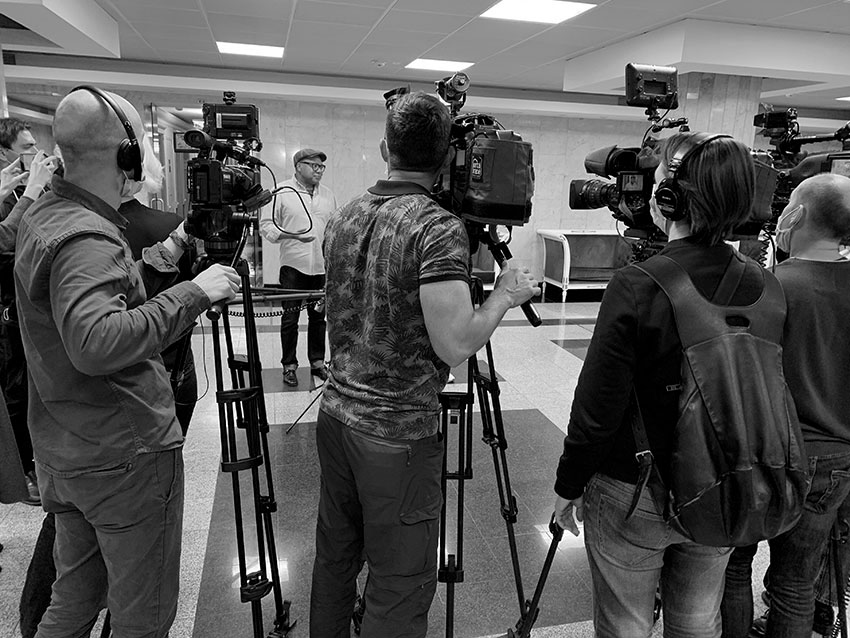 …The next day, on October 28, Moscow reconfined its population over 65 years old because of the pandemic and cancelled all cultural events. 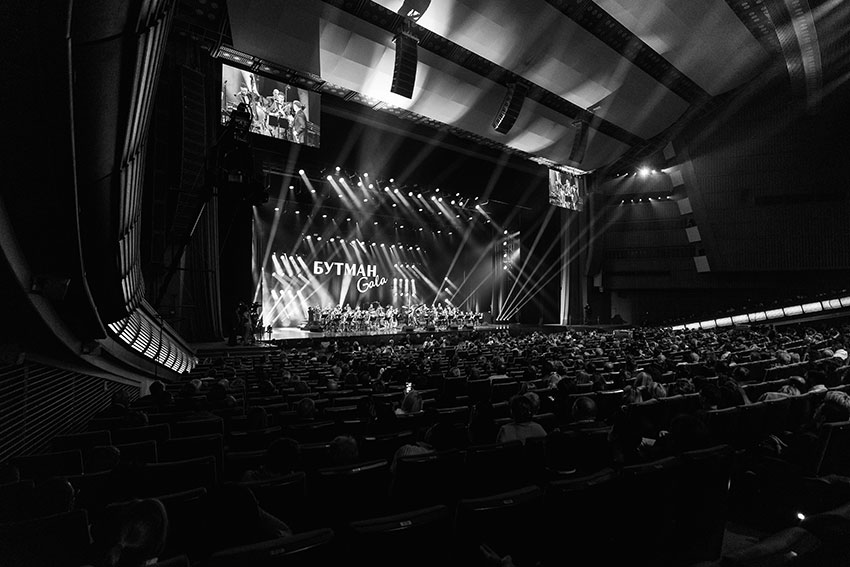 In a press conference before the concert, Igor Butman reminded us of the history of jazz in Russia, which had a more chaotic development than in the United States, but which also appeared a hundred years ago, in 1922.

Why was jazz popular from the beginning in the Soviet Union? Probably because it was also born from the slavery that the Russian people, the muzhiks in particular, experienced. Slavery was not, unfortunately, exclusive to the African peoples chained in the cotton fields of the United States of America, as it was throughout the American continent. Other forms of slavery existed in the Great Plains of Russia, as elsewhere in the world, and led to the revolution of 1917 that we know.

The rest of history shows us that the people of these two great countries later elected Mr. Trump and Mr. Putin… It’s amazing, but that’s another story.

Jazz in Russia had its ups and downs, but the Russian people, passionate about all popular and learned music, could not ignore this amazing music, even if they sometimes observed it with suspicion:

In short, if jazz was sometimes banned by the administration, it was not because of its aesthetics, but because of the symbols of the Western world that were hated in the USSR.

Today, jazz in Russia is in full development. Igor Butman is undoubtedly the figurehead. This extremely active man owns two jazz clubs in the Russian capital, as well as a jazz academy.

Supporting young artists is very important to Butman: “Our music school is young, but there is a lot of passion in our jazz,” he says. Our foundation is a powerful army of classical musicians and we have a very strong academic school”.

As a reminder, not only was Igor Butman noticed early on by Wynton Marsalis, but he was also praised by Barak Obama, who knows a lot about jazz and declared Igor Butman to be the greatest saxophonist of his generation. Raised in the Soviet Union, he moved to the United States in 1987 where he studied at Berklee College of Music. In 1993, back in Russia, he became a Jazz Bridge between Moscow and New York, playing in Russia with the greatest figures of American jazz: Eddie Gomez, Lenny White, John Abercrombie or Joe Lock. 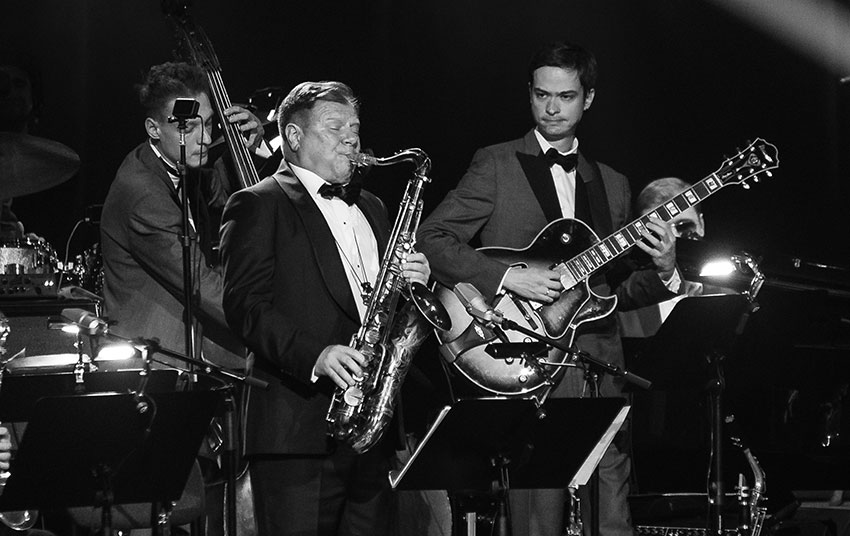 He organizes many jazz festivals held annually in Russia. Among them are Triumph of Jazz in Moscow and St. Petersburg, Aquajazz in Sochi, Skolkovo Jazz…

During the interview he gave just before the concert to the six European journalists present at this exceptional event and for which Couleurs Jazz Media represents France, he confided to us: “during this concert we will play great Russian composers like Shostakovich, great American composers like Duke Ellington, Billy Strayhorn, … all in one place. And you will see that in all cases, it swings! We arranged with Wynton that the two big bands would pass the ball back and forth, sharing all this music. We’re taking advantage of the fact that the Jazz at Lincoln Center Orchestra is on tour right now. So he will play some of his recent compositions. Then after intermission, we will pay tribute, each of the big bands in turn, to the slavery that our two peoples experienced. We all have traditional songs that we will perform for this occasion. We will play “Work Song – Volga Boatmen”.

After this press conference, we take advantage of our guide to take a few steps in the Kremlin, closed at this time to the public, before the opening of the doors of the big State Kremlin Palace. Every 100 meters an armed guard asks us for our passes, our passports on the “visa” page, our PCR tests made in Russia (the European PCR tests, like the American or English vaccines, have no value here). Finally, a more zealous guard orders us to stop our tourist visit immediately. The Communist Party has disappeared, but not the abstruse bureaucracy which decidedly remains.

We have time to observe the monumental size of the building built under Nikita Khrushchev before entering the vast hall and taking our seats in comfortable and large armchairs.

When the curtain rises, the two big bands appear, the Moscow Jazz Orchestra on the left, the Jazz at Lincoln Center Orchestra on the right. Slightly in front of the stage Igor Butman, mainly conducts his Big Band and sometimes invites the Jazz at Lincoln Center Orchetra. Wynton Marsalis, as usual, is in the back row of his Big Band, among the trumpet section. 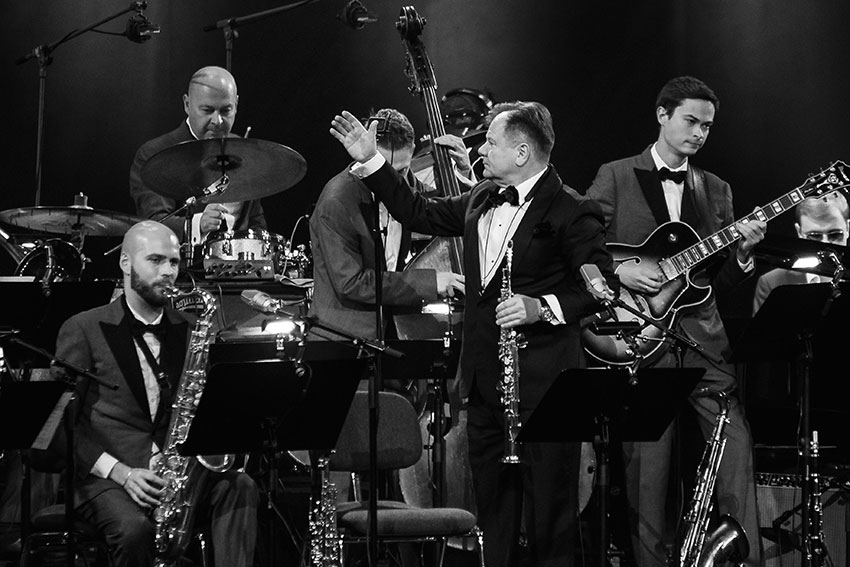 Sometimes the two orchestras converse as a group, sometimes the soloists answer each other from East to West or vice versa. It is fascinating!

The concert begins with a reprise of Shostakovich’s 7th Symphony conducted by Igor Butman. The careful arrangements are by Nick Leninovsky. The two orchestras play in unison and the short choruses alternate from one to the other of the Big Bands. Then the pieces follow one another, played alternately by one or the other of the bands under the attentive glance of the “opposite” orchestra. Opposite or Adverse being a very bad qualifier, so much the friendly rivalry during this evening, is an invitation to the listening of the other. A chorus of the young Russian guitarist Evgeny Pobozhiy who has no alter ego on the American side that evening, seduces us particularly. We regret that he was not given more opportunities to express all his talent. On the Lincoln Center Orchestra side, it is the chorus of the baritone saxophonist and bass clarinet player Paul Nedzela that leaves the hall speechless. 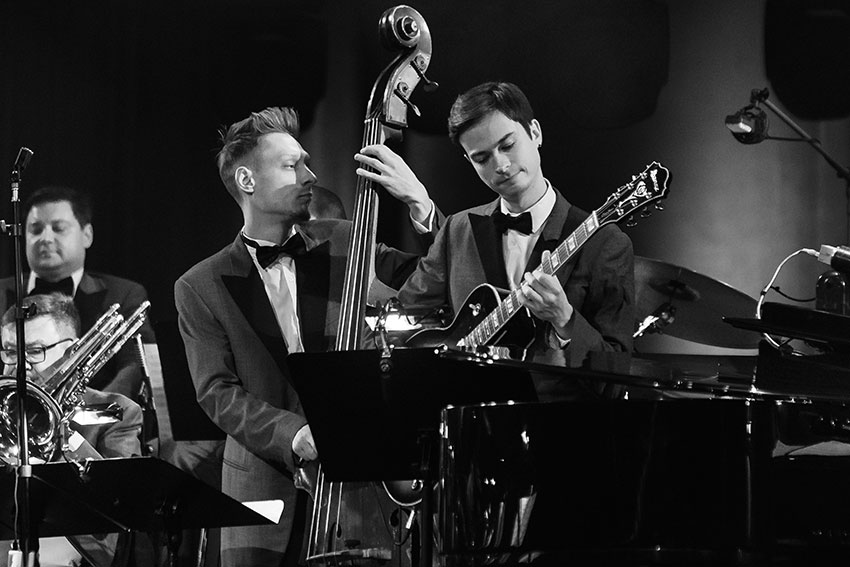 To be noticed, the exceptional acoustics. Hats off to the sound engineers who did a remarkable job.

After this first piece, it’s a festival of improvisations around the theme “Blood in the Fields” by Marsalis‘ band under the attentive eyes of all the musicians of the Moscow Jazz Orchestra.

Then the pieces follow one another, interpreted alternately by the two Big Bands, who thus answer each other. “Here is She Young Beauty” on one side, “Concerto For Joe” on the other. 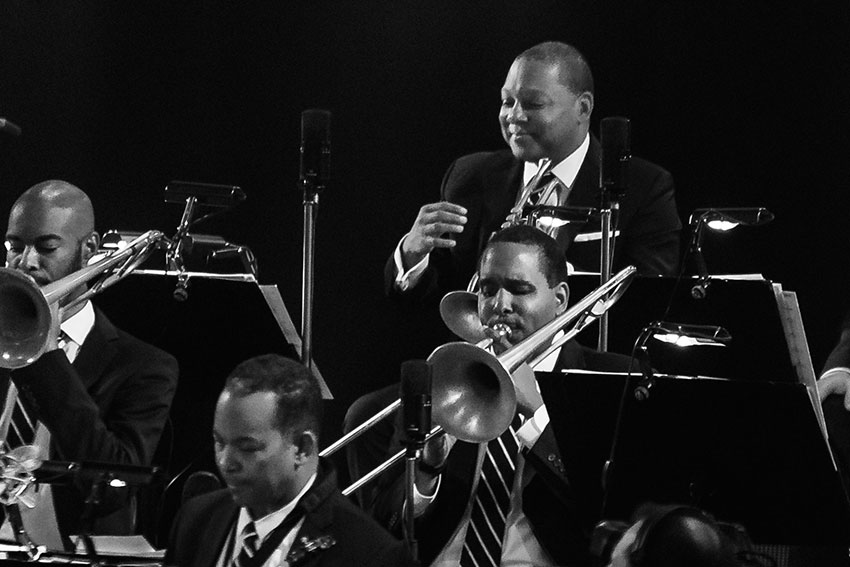 At each change, it is interesting to note that the musicians who are not playing turn their gaze or sometimes even their bodies in the direction of the other orchestra, most often wearing a broad smile, accompanying the choruses with an approving or admiring nod, as connoisseurs.

It is as if two sports teams were watching the other team play, dribbling, throwing the ball back and forth and applauding the performance. 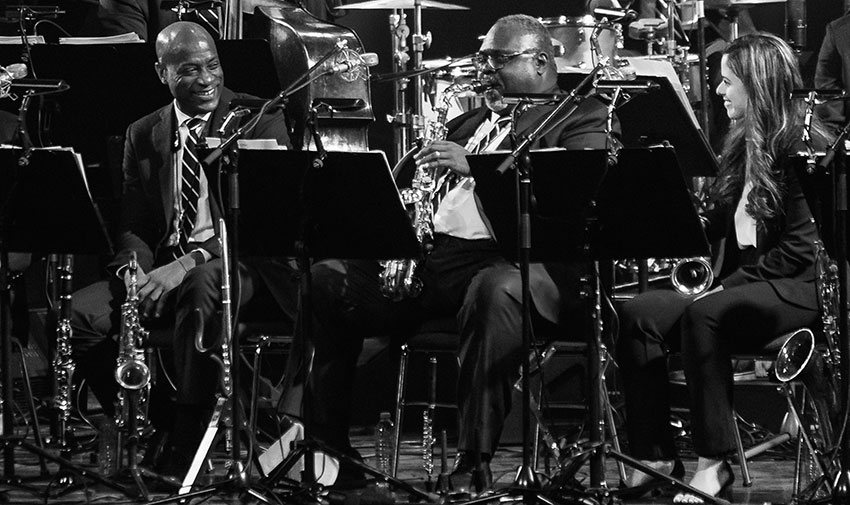 The first set ends with a splendid “Baby I Love You” (Music by Wynton Marsalis, lyrics by Bobby McFerrin, arrangement by Nikolai Levinovsky) – Oleg Akkuratov, Igor Butman and the Moscow Jazz Orchestra

During the intermission, you can climb all the floors of this gigantic building and admire the Kremlin at night through the large windows… A show within a show. 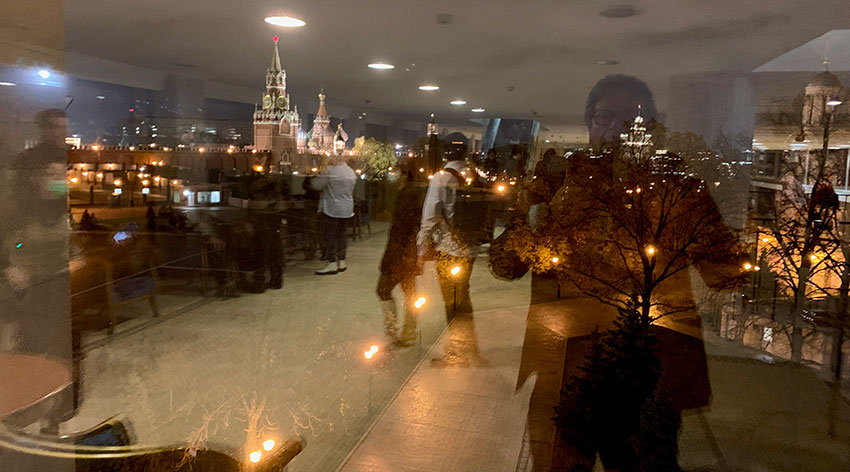 The second set begins with this deep “Work Song“, with music by Nikolai Levinovsky) – Igor Butman and the Moscow Jazz Orchestra, Jazz at Lincoln Center Orchestra with Wynton Marsalis where the orchestras respond to each other again.

Several pop and rock stars, crooners and singers are invited to participate in Igor Butman‘s birthday party, among them Fantine, to whom we gave the name “Black Russian” born of a Puerto Rican mother in Moscow, Sergey Mazaev and Valeri Syutkin, rock stars very well known to the Muscovite public, judging by the smartphones that get up to capture some pictures. 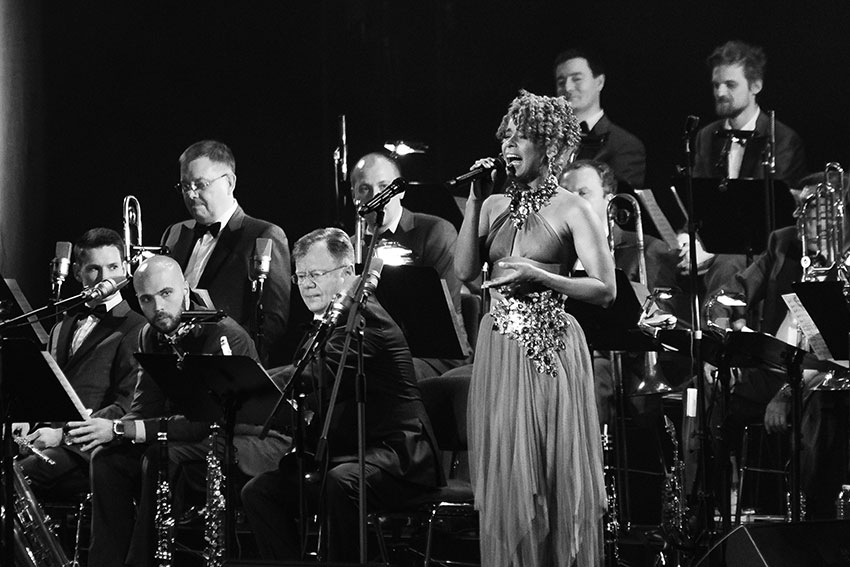 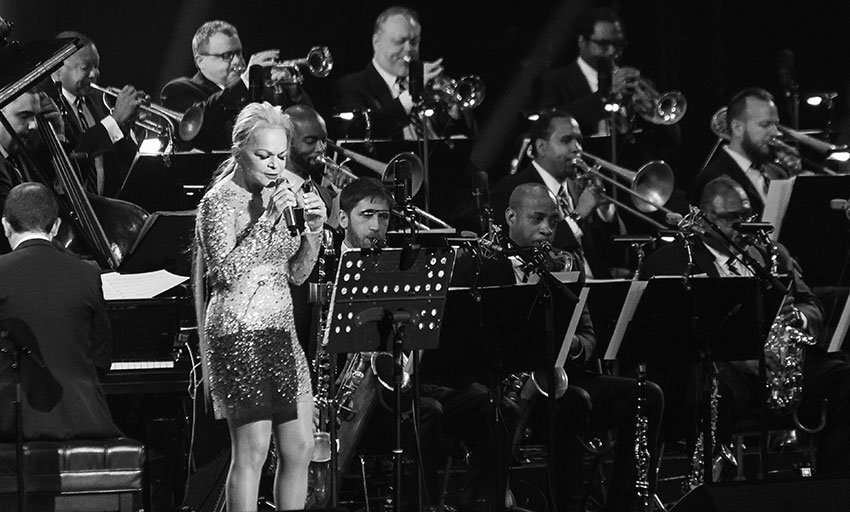 Also noteworthy is the spectacular intervention of Oleg Akkuratov, the formidable and inspired pianist of the Moscow Jazz Orchestra, who has a voice and as much talent for singing as for his keyboard.

He suddenly intones a “Baby I Love You” that quickly turns into “Happy Birthday Igor!” It sounds like a Happy Birthday but it is in fact a Wynton Marsalis composition that he takes up on trumpet and the whole thing goes into a joyful improvisation between friends! 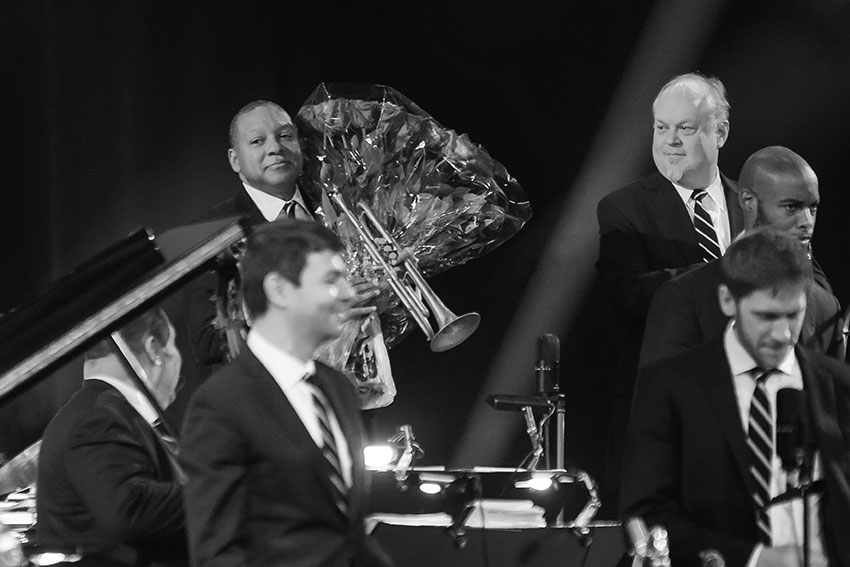 On this occasion, Igor’s brother Oleg Butman joined them on drums.

Then there are Drum Battles, Sax Battles, Trombone and Trumpet Battles between the two bands.

The only winner is Jazz!

An exceptional XXL concert in a rare place. 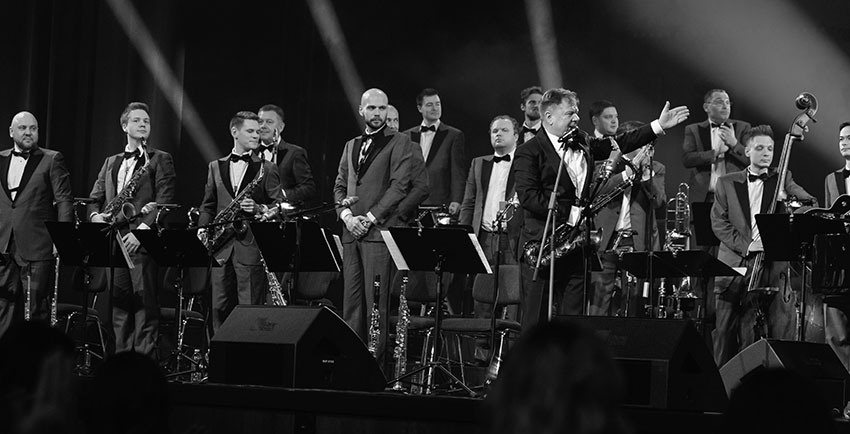 Congratulations to the musicians of both teams, to the technicians, to our guides Anna and Arlette.

After such an experience, one comes to dream of a better world where all the armies of the world would be replaced by Big Bands of Jazz…

(*) In comparison, the Grand Auditorium of the Palais des Congrès in Paris has 3700 seats…

Unless otherwise noted, all ©photos are the work of the pool of official accredited photographers whom we thank here.