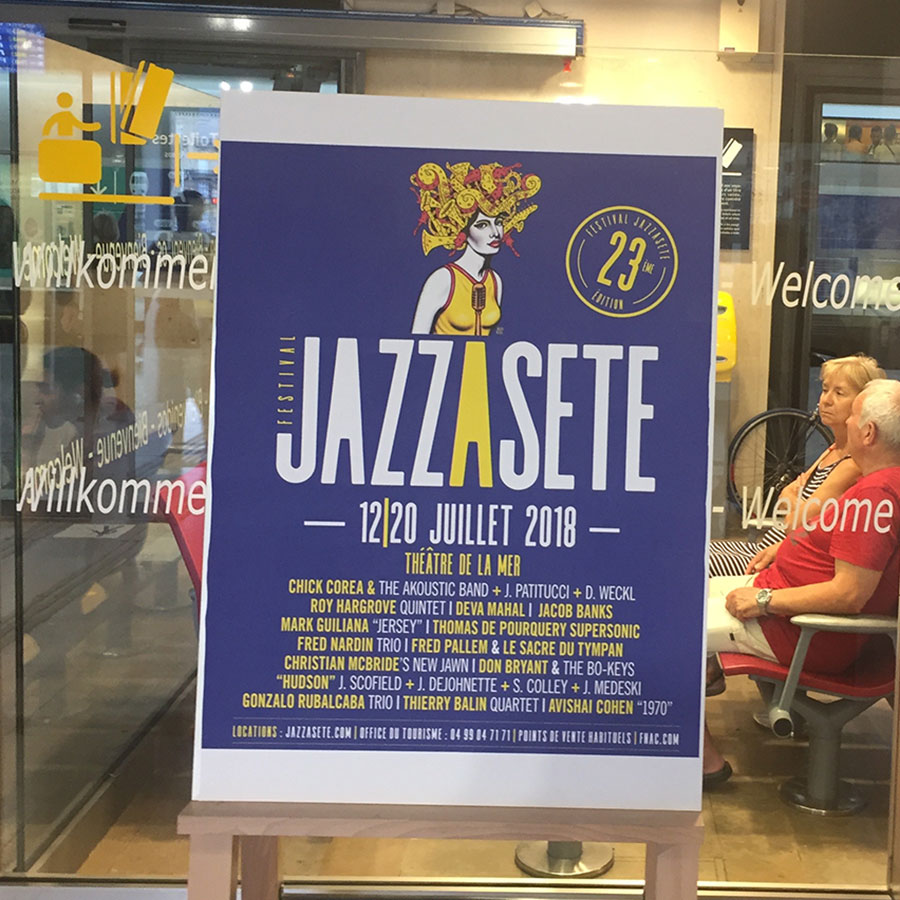 Couleurs jazz was invited to discover in situ, the three last days of the Festival Jazz à Sète, 23rd  edition July 18, 19 and 20.

Remember, we already said a few weeks before the opening of the Festival, that exceptional musicians selected by Louis Martinez have from July 12, enthused the audience of fans who filled each evening the 1,500 seats of the Théâtre de la Mer.

Fred Nardin, swing, finesse, elegance; Cuban pianist Gonzalo Rubalcaba, once again radiating virtuosity and musicality, Thomas de Pourquery the UFO, who left an unforgettable memory to those who discovered him for the first time: they were still talking about his performance in cafes and in the different corners of Sète several days later.

But apart from the headliners scheduled at the Théâtre de la mer, Jazz à Sète is also a “Off” concocted by Jade Martinez for the association “Set de Jazz” and which delights passionate music lovers who can approach and talk with the artists, attend (free admissions) conferences, see films, listen to concerts in various places of the city.

As summer festival-goers, we have also been able to enjoy Sète, its canals and gastronomy. A Jazz festival useful for that too.

Among the partner places of this 2018 edition, we particularly liked the restaurant “The Marcel” which has recently been allocated the services of Fabien Fage, a young starred chef, full of talent and new ambitions for this already busy restaurant. a story of three decades.

The place has a room “Le Comptoir” where you can enjoy a nice wine list served by the glass tasting the “Mini Marcels”, listening to the occasion some Jazz and adjoining, the restaurant room itself that welcomes you in an Art Deco atmosphere, warm, for a moment of local cuisine, much inspired.

The kitchen is also directly open to the restaurant.

We are in a friendly place, clearly claiming the gastronomic qualifier. A must for those who are passing through, as for lovers of the arts and regulars.

The chef offers us :

Then we meet at the Médiathèque François Mitterrand, Christian McBride who talks about his new quartet New Jawn.

In the early evening, we run to the beaches, not to take a bath (crowd bath), but to listen at “La Ola” beach hut, Thierry Gautier (keyboard) good trio. An audience of knowledgeable and enthusiastic people, the light that begins to fall on the Mediterranean sea, this evening looks sweet and beautiful.

The time to arrive at the Theater de la Mer, rustling and displaying complete, and here we are settled in the benches. But the sky has darkened to become black in places. Big risk of thunderstorms! Hesitations … Wait. Then finally, sorry message and full of good sense of Louis Martinez who decides after multiple consultations, to cancel the two evening concerts … So, Christian Mc Bride decides to return to his hotel to catch a plane that will take him from the next morning to Malta where he is expected for the next night concert.

We are sad. But what can we do under this rain full of electricity?

We were also about to regret Roy Hargrove in quintet, when the noise begins to run that he really wants to play tonight, if however we find a sheltered place with a piano.

It will be “The Marcel” that some “happy few” of which we are part, will meet, surrounding the musicians as if we wanted to protect them and keep them dry with us. While Tadataka Uno dings the piano, so that it rings properly for this improvised acoustic concert, then that Roy Hargrove, begins, sitting in an armchair, to blow in his trumpet. We have the feeling of collusion, of living a very rare moment … A gift in return, from the sky in a way.

Here is an excerpt:

The next morning, we wait at the foot of our building near the port, Oualid and his electric Tuk Tuk, ideal for this climate, for a walk punctuated with stops. Direction the different neighborhoods of the city starting with the Short Point, the canals that crisscross the city, the upper district and Mount St. Clair.

Cinema afternoon: The Blaxploitation, the fight against the exclusion of black people from American popular cinema, presented by our colleague Lionel Eskenazy. This afternoon’s film is Jack Hill‘s 1974 “Coffy the Black Panther of Harlem“.

We escaped, we believed … Despite a scenario to the cookie but where the Black Panther fights with several “bombs” half-naked blondes. A rather improbable scene, but certainly cult.

Tonight is the big night … The weather is milder. Also the sky will remain clear to welcome the excellent quartet of Thierry Balin, laureate of the Tremplin of this Jazz edition in Sète 2018. A jazz with multiple colors ranging from the Tango, while passing by the boléro or the biguine.

To follow this tasty and lively entry, is expected, a bit of the culmination of this Jazz Festival in Sète 2018 … The scene must welcome the always alert Chick Corea (77 years).

His companions, all legends, necessarily hold the poster: John Patitucci on bass and Dave Weckl on drums. This trio piano-bass-drums, however, has nothing… “standard”. (The three re-form today, the Akoustic Band of almost 30 years ago, so it floats in the air like the impression that one lives a unique moment. A concert that we will never forget … The trio is in the best of its form and connects the creations and covers the Chick’s repertoire.A perfect harmony between the three virtuosos.

The set starts with « Morning Sprite » – a cover of the album of the same name, dating from 1989.
Then the akoustic Band connects with a “Japanese Waltz” then “That Old Feeling” from Sammy Fain, before continuing with a  Duke Ellington standard, “Sophisticated Lady“, also in the 1989 album. Very feminine and extremely sophisticated …
Then, « Life Line »a new composition, before finishing to completely conquer the audience dumbfounded by a piece from the classic repertoire of Scarlatti …

To end, an masterly « You and the Night and the Music », before an encore for “Spain“, claimed by the public, and introduced by the malicious concerto of Aranjuez … After such a performance, we can go to bed with a thought for our loved ones, our friends, who could not to be with us, to share this exceptional grace moment.

Morning in Séte. Walk along the canals, coffee at the water’s edge by reliving the concerts of the day before, fully happy to be there in Sète, this unvarnished city, authentic, warm …

Time to listen to Fred Pallem who talks about big bands, the film musics that he likes, the musicians who have influenced him, the musical poverty of the French song …

Then, we go to listen to Brice Miclet‘s interview, the author of “Sample“, a book on the origins of Hip-Hop.

A lunch awaits us in the restaurant “Oh Gobie” near the auction. Fresh fish, mussels à la plancha, Rouille Sétoise to lick the upper lip.

Back to “La Ola” on the Lido promenade. Always a beautiful atmosphere, an evening aperitif to listen to a local quartet, “Jazz at the Hill” interpret elegantly, classics Swing.

The fresh beer, the mist on the glass, the oblique light, on the water of the big blue … Everything contributes to put you in a mood of the most playful to attend the last evening of this Jazz in Sète 2018.

The program is at the height of the event: Fred Pallem and Le Sacre du Tympan for the project “Soul Cinema” will close the evening in the second part of four sacred monsters: John Scofield on guitar with John Medeski on piano and keyboards, Scott Colley on bass and Jack Dejohnette on drums

A storm is announced around 09:00pm at the same time as the concerts start … But … Hesitations, delays then we go and everything is going well. Groove, funk, blues … All these territories are conquered and us too.

“Wait till Tomorrow” seems an uncertain prayer in heaven. This will be answered.

Then, in its momentum, the quartet interprets “Hudson” and “El Swing“.

The agreement is perfect. The public is seduced. John Scofield very expressive in his facial expressions seems totally gone and finds more and more inspired choruses and exchange with Medeski, then Dejohnette, still imperial and serene.

A thunder of applause dreads that of the threatening sky. Also, between the drops, we hesitate to launch on the track the last set, that of Fred Pallem & le Sacre du Tympan. One delays, observing the few irregular drops.

Then we go … Started on the run, the bassist directs with his whole body and his steady hand. The soloists are at the maneuver. In a few minutes the audience is conquered …  the public invades the track and dances on this groove and funky music.

The smiles are on everyone’s lips, the musicians are thoroughly … Perhaps they feel that the fight is futile … The degraded weather is announced, then confirmed.

The rain began to play seriously taps; the tempo is racing and in a few minutes, the audience disappointed but happy to have finally been able to attend the two concerts of this shortened evening, climbs in a few minutes the stands of the Théâtre de la Mer to shelter and do not return … That the next year.