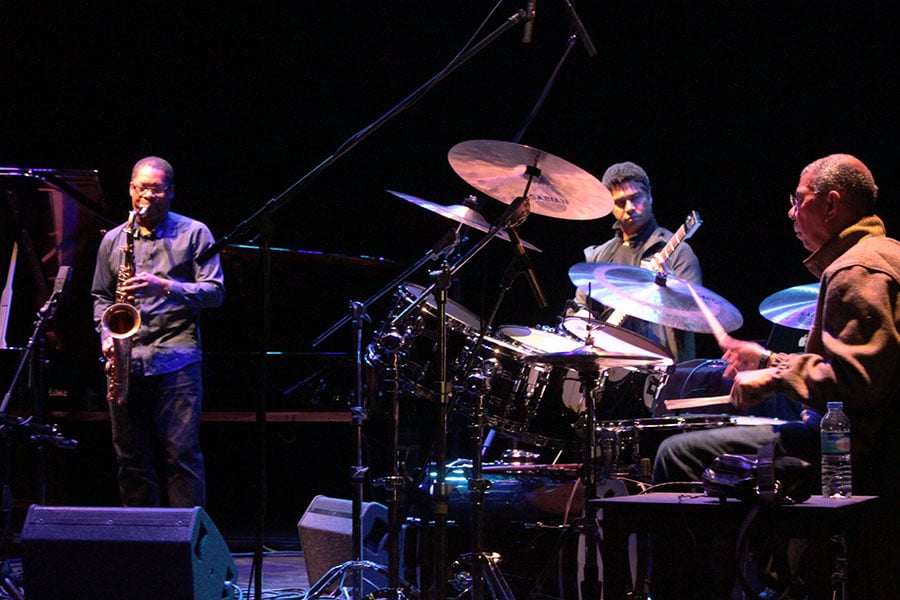 It’s a rainy Saturday night at the Berliner Festspiele. Fifth of november, fhe fifth day of the Berlin Jazzfest. Today’s features are a combination of mythic names.

Before the big dish is served, Angelika Niescier and Florian Weber Quintet, followed by Nik Bärtsch’s Ronin hr Bigband warm up the stage. The big dish is served at 9pm: the trio formed by 74-year-old legendary drummer Jack DeJohnette, who after having played with such names as Miles Davis, Keith Jarrett or Freddie Hubbard, takes the role of the conductor next to Ravi Coltrane’s saxophone and Matt Garrison’s bass. Both of those, whose childhood DeJohnette witnessed, are “sons of” – in Ravi’s body flows the blood of John Coltrane, and Matt carries the energy of his father, Jimmy Garrison. They both approach their instruments, however, in a unique and mastering way, and an explosion of power is exactly what the public is served on Saturday night.

Things are about to happen.

There exists a strange energy in the air. Some kind of expectation. Some sort of breath retention. As if legends were awaiting. And awaited.

There is a drum set, an electric bass, a grand piano and a set of saxophones.

Dressed in red, he carries the three saxophones. His body is reflected on the surface of the black piano, dazzling. He is dressed in red. Throwing the light into the big concert hall. The Berliner Festspiele applauds, ravishing. Him, bright. That red… that red is making a statement. The passion red, the powerful red, red the colour of blood and the colour of fight and the colour of energy, of the hottest nucleus of the sun.

Jazz is red. And blue and grey and black and green.

What does it all that mean?

It means that by the time he comes on stage, he has mastered it. He carries inside of him all the lessons learned, all the notes heard, all the mistakes made, all the exercises accomplished, and he projects them in a fresh, futurist, real and raw way.

And the black bass is carried by these master hands. Matt Garrison. A beautiful smile, a powerful voice. An aggressive finesse. Harsh, delicate notes and touches. He, too, has history on his shoulders –and in his entrails. Jimmy Garrison flows in his veins.

Two unbearably talented musicians whose childhood was witnessed by the third man on stage. His hand up, in a warm hello.

Jack DeJohnette sits on the piano.

The man endured by Freddie Hubbard, Miles Davis, Bill Evans, Alice Coltrane, Sonny Rollins, Herbie Hancock, John Scofield… He talks a little with the piano. Warming up. Getting ready. And then walks to the drums set. He is 74 years old. And his soul is shining.

He approaches the drums in an unconventional way. As if he had seen and done and felt it all. And he is the clear conductor. This is a wild beast dialogue, but his power is omnipresent.

Still, there is no ego. No battle. No bites, no frontal attacks, no attempt to step on anyone. Such is mutual respect. And therefore the conversations carried out by the three are in perfect harmony. They do not play typical tunes, they experiment, they flow, they drive across the night and the minds of the listeners with deep beautiful improvisations, with DeJohnette playing with speeds and volumes, with Coltrane’s perfectly clean and pure and precise playing, with Garrison carrying it all and seasoning it with epic, transcendental and an almost heavily oneiric use of the electronics.

It is some sort of horror vacui, as the silence is being pushed far, very far away from the Berliner Festspiele right now.

And all of a sudden, something begins to happen. A very familiar tune. A saxophone drawing the line of a war poem. John Coltrane’s soul materializing itself in the shape of a tune that comes all the way from the South of the States.

Alabama. Alabama is there. The song John Coltrane’s wrote in response to the death of four schoolgirls in the bombing by white supremacists of the 16th Birth Baptist Church in Birmingham (Alabama) in 1963. John Coltrane’s script being rebirthed by his own son, and Matt Garrison, and Jack DeJohnette, who picks the mallets and starts making the drums cry in anger. And the saxophone weeping in despair. And the bass stepping in exactly when it has to.

A reinterpretation of the original, echoes of that performance in 1963 in Birdland. Coltrane father in the blowing of Coltrane son.

And so the show carries on, painting new pictures and continuing the conversation. Smiles and heads and applauses to the solos. Coltrane moves as if he had the music inside of him. DeJohnette plays as if he knew every single inch of his drum set. Garrison caresses the strings and performs the most precise incursions.

And then, he turns to his left and clings on another instrument –perhaps a lyre? A brief, quick taste of its metallic sound and bam. Everything is over.

The protagonists about their project :