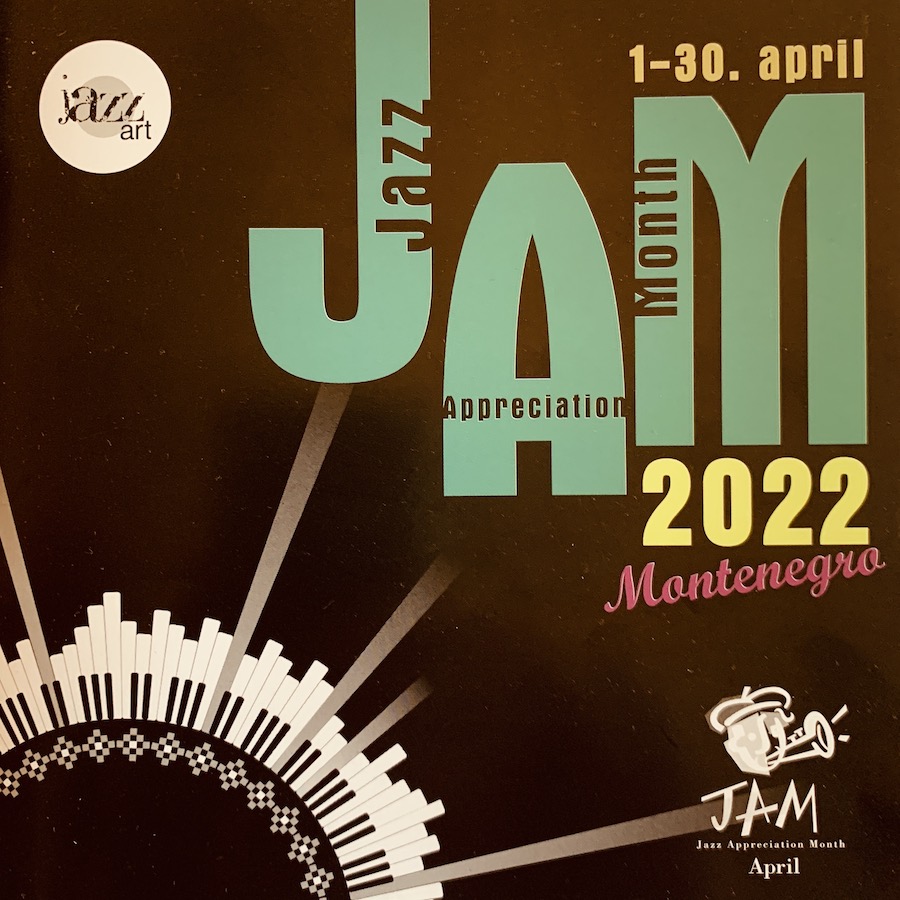 Balkan Jazz Connections is the motto of JAM (Jazz Association Month), the fifteenth annual edition of the most important jazz event in Montenegro. This year it took place from April 1 to 30.

Guided by the positive experience of the Balkan Youth Jazz Orchestra in 2021, the idea of this 2022 edition (post Covid?!) was to bring to the forefront some of the emerging jazz talents of the Balkans.

The instigator of this project is Maja Popovic, president of the  « Jazz Art »association.

For the first time in Montenegro, performed in concert : 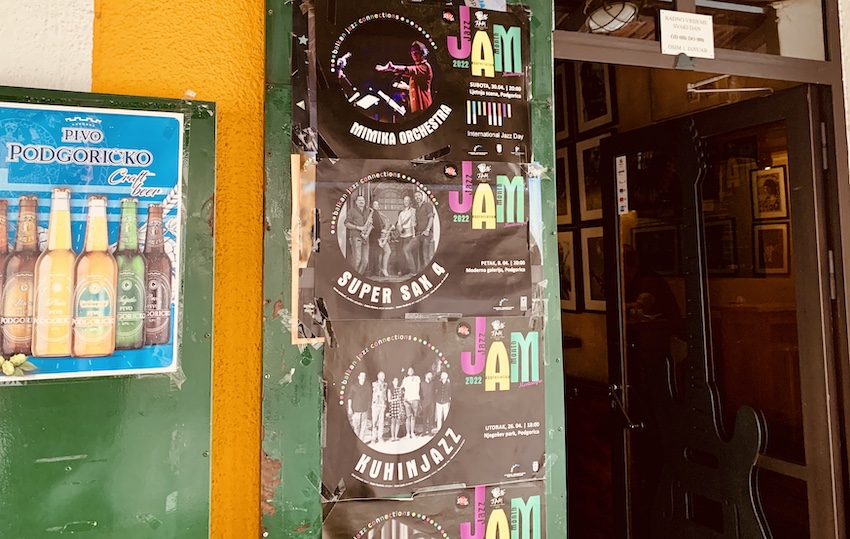 During Podgorica festival, two movies with a jazz theme were shown:

Within the framework of the exchanges “France Jazz Balkans” initiated by the Ministry of Europe and Foreign Affairs from France, which must be thanked for its financial support, as well as the cities of Dijon and Chambéry, instigators of the meetings and exchanges between the various actors of the project Jazz France Balkans, Couleurs Jazz was thus present to give an account of this event to the various partners of this project and to a large public.

The last week of the “JAM Festival of Montenegro”, which we were able to attend, had on the program, from 26 to 30 April 2022, in addition to the films presented, three groups and four concerts.

The sextet of the composer, drummer and bassist, Slaven Ljujic, who offered his new project for the first time.

The decision was made to install the musicians under a nice gazebo in the recently refurbished Njegosev Park on the banks of the Moraća River. 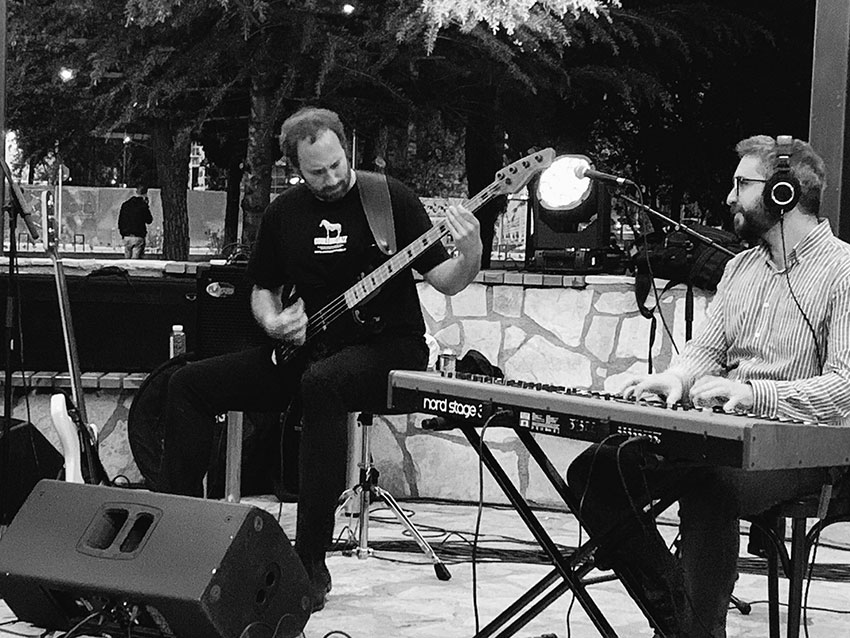 A mixed audience of families, intrigued young people and informed music lovers, made up it seems for half of passers-by, for half of festival-goers. All the concerts are free for the public and financed by the organizing association with the support of the City of Podgorica and various partners like the French Institute.

Complicated sound conditions for the musicians installed in a semicircle under this kiosk, but a rendering of excellent quality for the walkers of the park Njegosev, as for the public which amassed all around during the concert. 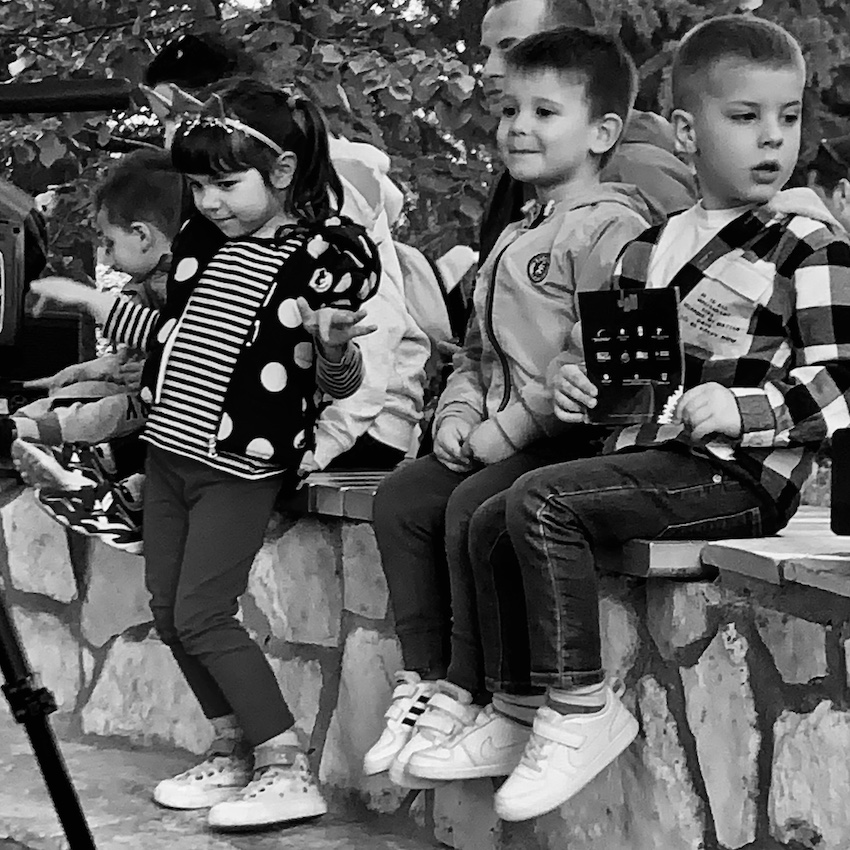 As for the music proposed by Kuhinjazz, an emerging group, it is a jazz fusion, tonic with colors specific to the culture of Montenegro. The emphasis is on the groove and pulse of the leader Slaven Ljujic with colorful and inventive bass lines, assisted with the precision of the metronome, by the drummer Martin DJorjdjevic.

Keyboardist Enes Pavicevic is full of energy and inventiveness in his dialogues with Dejan Ljujic, the leader’s brother, who is as talented on jazz trombone as he is on rock guitar.

On the saxophone, Stefan Pavicevic, sends magnificent lines under the trees of the park of this soft night of April. He will finally delight us with a magnificent chorus improvised with a small local flute, very basic, but of an effectiveness… !

Too bad that the sound of the violinist Luna Kostadinović is too much covered by the other instruments. This will be corrected the next day, during the second concert of the same group.

The Kuhinjazz, literally “kitchen jazz” serves a spicy jazz cooked with the flavors of Montenegro mainly but also of Africa, mother of all jazz. A well prepared jazz with a fluid writing, leaving the opportunity to beautiful evolutions, to inspired choruses, each one bringing its ingredients, namely its talent. As in any good kitchen it does not remain about it less than one needs a chief with the piano (of the kitchen) or with the battery(*) of kitchen also, or still here with the bass.

(*) translation indications:  a batterie in french is a drums set and a set of kitchen utensils while a piano can also be a stove… 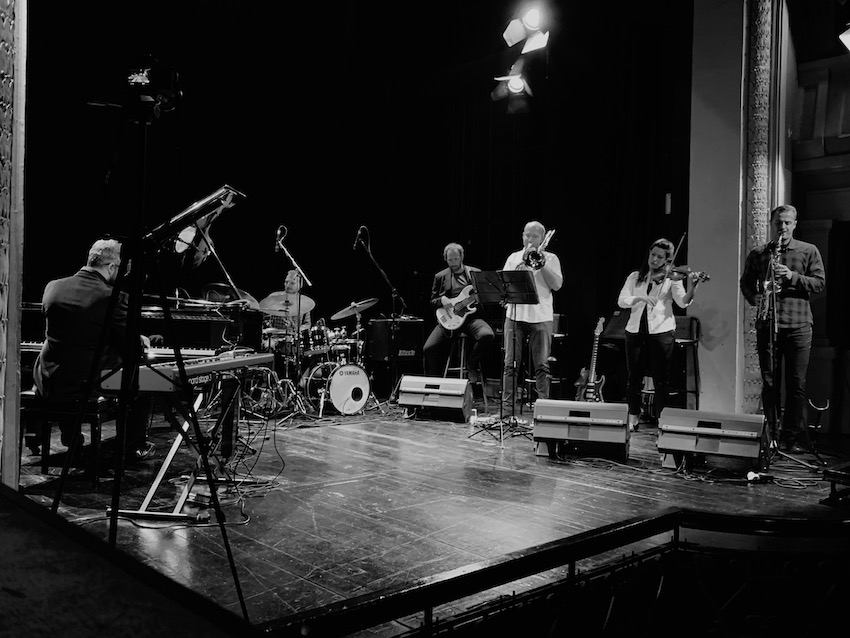 Arrived at the time of the sound check, we take advantage of it to make a tour in Cetinje, the historical capital of Montenegro which kept some functions, the majority of the administrations managing the country being rather based in Podgorica. Cetinje, a city perched in the mountains, looks like a provincial town, calm and quiet. The demonstration in favor of Ukraine led by a procession of about forty people that we cross, does not seem to disturb the inhabitants sitting at the terraces of cafes. 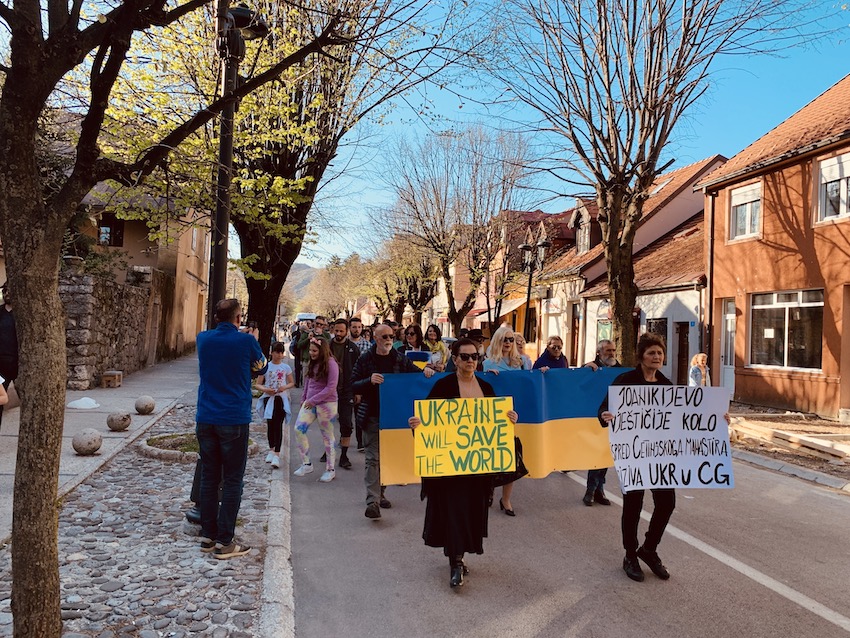 While passing by, don’t miss to admire the old French embassy, a building with a strange architecture. It is said that it was built in this baroque way, because the plans that were sent there were in fact intended for the construction of the French embassy in Cairo… This mistake makes us happy.

The Zetski Dom, Royal Theatre which is part of the “European Route of Historical Theaters” especially from the Adriatic countries and which hosts the evening concert welcomes us. This theater was built after the country was able to free itself from the Ottoman Empire, in 1878. It was also used as a library, a cultural center and a museum…. Restored, the Zetski Dom now hosts theatrical performances and concerts. It reigns there a calming atmosphere, proper to the places of culture which are charged with History. 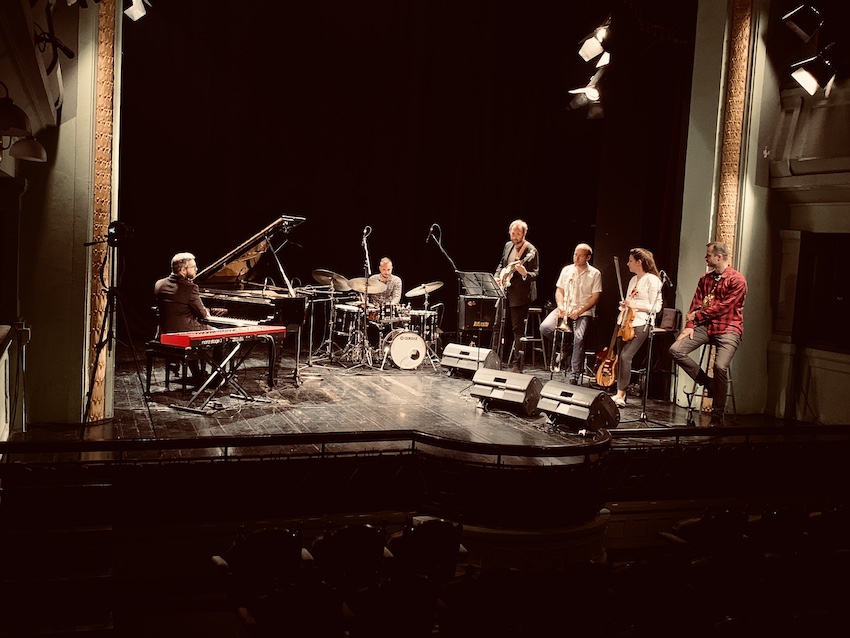 The stage is deep, the grey velvet seats are comfortable. The acoustics were favourable, allowing a completely different vision, or rather, a new appreciation of the previous day’s concert. Let’s salute the sound engineers who did a remarkable job for all the concerts.

Tonight, we could appreciate the subtle phrasing of Luna Kostadinović on the violin as well as all the musicians who were in great spirits.

Some of the pieces heard the day before were highly anticipated, especially those with an African groove. The cover of “Butterfly” by Herbie Hancock is a new appropriation with an exquisite taste. Like a good traditional dish revisited. served there for dessert.

The quartet from the Bosphorus, made up of the trio of pianist Baturai Yarkin, with Nagme Yarkin, singer and player of Kamânche or kamancheh, a family of stringed instruments of Iranian origin widespread in the Middle East, Turkey and the Balkans, offers us a jazz repertoire with oriental colors ranging from Anatolia to Azerbaijan 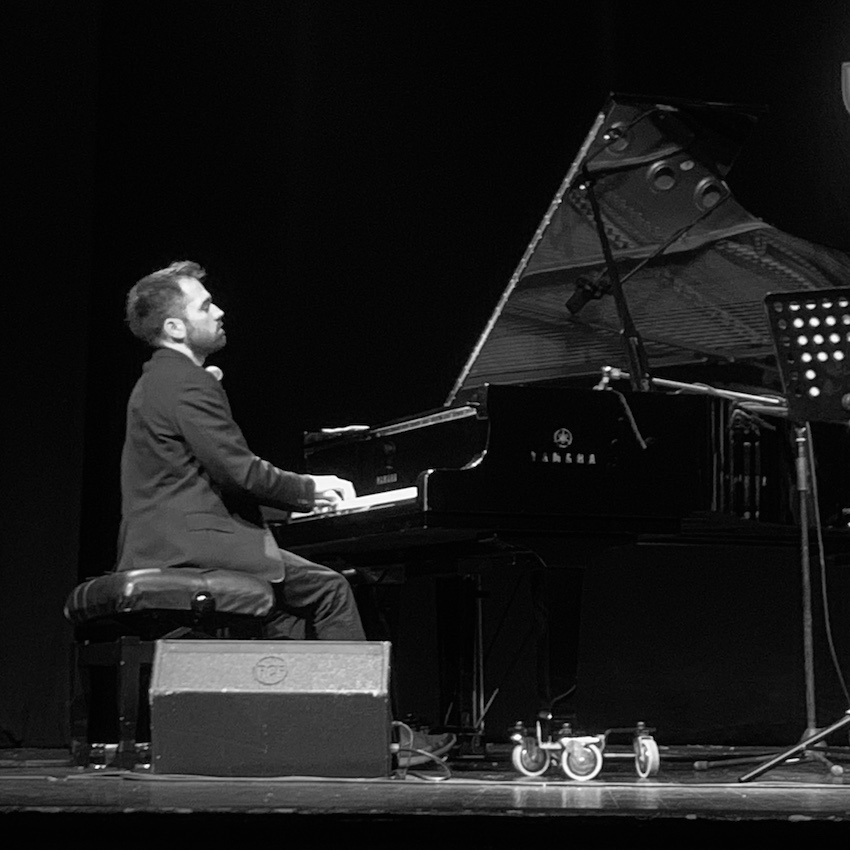 A solid rhythmic provided by the double bass player Enver Muhamedi and the drummer Mert Can Bilgin. Virtuosity of the musicians and in particular of the pianist Baturai Yarkin, whose play is not without reminding of Azeri pianists like Shahin Novrasli or Isfar Sarabski.

Long vocalizations of Nagme Yarkin. The pieces are a bit similar in terms of rhythm. Our preference goes to the melodies that this incredible artist draws from her instrument, the Kamânche, which certainly offers a less wide range than the violin but which has a particular sound, lower, more suave. We would have liked more improvised choruses like on the first piece. 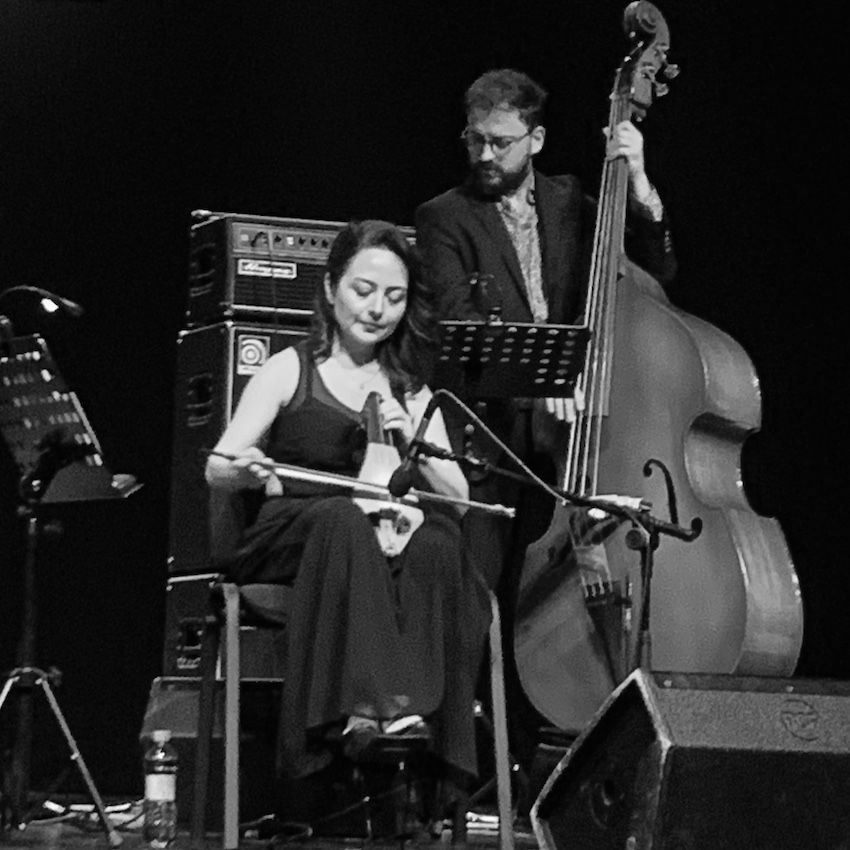 We remain under the spell of this two-hour long concert.

The audience of the Kic Budo Tomovicde Theater in Podgorica, will give them a well-deserved standing ovation. 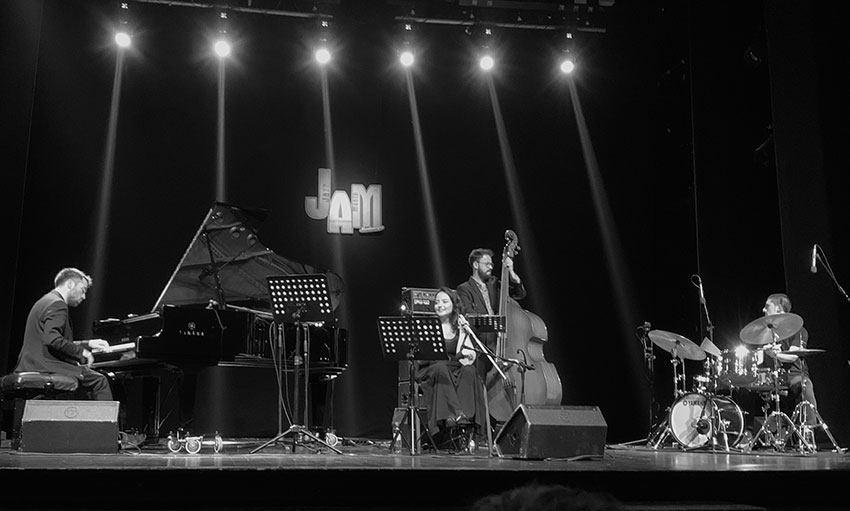 Saturday April 30 – Mimika Orchestra on the open air stage of Ljetnja in Podgorica.

A theater of greenery and stones on high ground, at the confluence of the Ribnica River which flows into the Moraća River in the middle of the city. What a beautiful place!

A few rows of seats in a semi-circle, a stage wide enough to welcome the 18 Croatian musicians of this original band, already by its configuration, but especially by its original musical creations inspired by the American jazz Big band and the rich musical culture of the Balkans.  It grooves, it fizzes, it hums! The choruses of the musicians, all of very high level, carry us away in a spiral from which we come down shaken and enchanted a little like when we go up in fairground machines which send you in the air and jostle your senses for more enthusiasm. 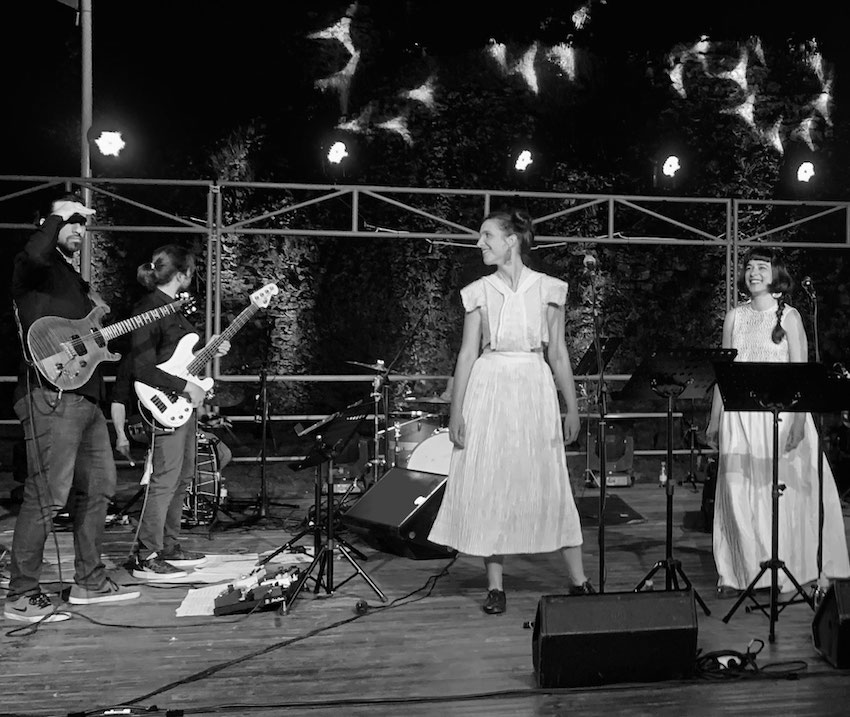 Breathtaking solos on saxophone, tuba and flute, an impeccably efficient rhythm section: percussion, drums, bass and electric guitar. Blowers, saxophones, trumpets, flutes, trombones up to the oboe and finally two singers like ancient goddesses who roar, dance and chant the melodies with a sustained energy.

In this overexcited atmosphere, the arrangements are chiseled with fine gold, the rhythmic vibrations are sharp and the energies telluric.

This is unlike anything you’ve ever heard.

The Mimika Orchestra can be considered as one of the most creative orchestras on the European jazz scene. It takes the audience on an adventurous journey where jazz collides with other musical genres and art forms, telling anthropological, cultural and mythological stories from the past and the future.

All this wonderful world is led by the masterful hand, or rather by the full-body gestures, of the composer, Mak Murtić. 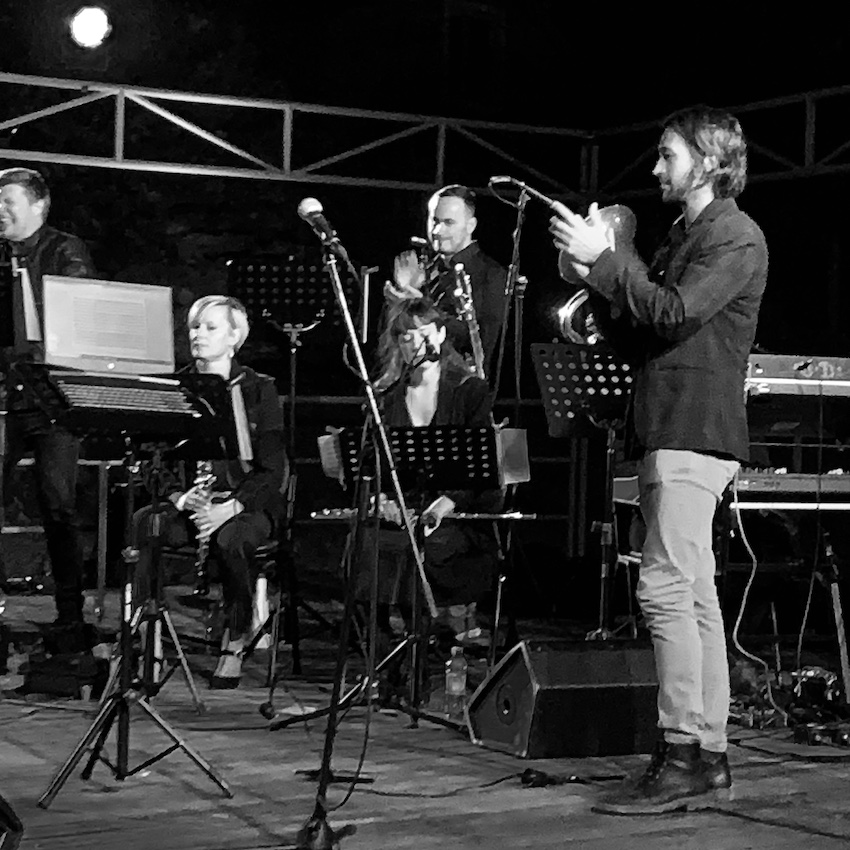 In short, you must listen to this Balkan jazz rock opera with a spicy sauce!

And what a great present to celebrate April 30, International Jazz Day, recognised by Unesco!

Thanks again to Maya Popovic, manager of this JAM Festival, as well as her team, the city of Podgorica, the French Institute of Montenegro and all the partners who make these projects possible.

A tribute also to the cities of Dijon and Chambéry, as well as to the Ministry of Europe and Foreign Affairs for its financial support to the project “Jazz France Balkans” which allowed this report and the diffusion of this amazing Balkan jazz.