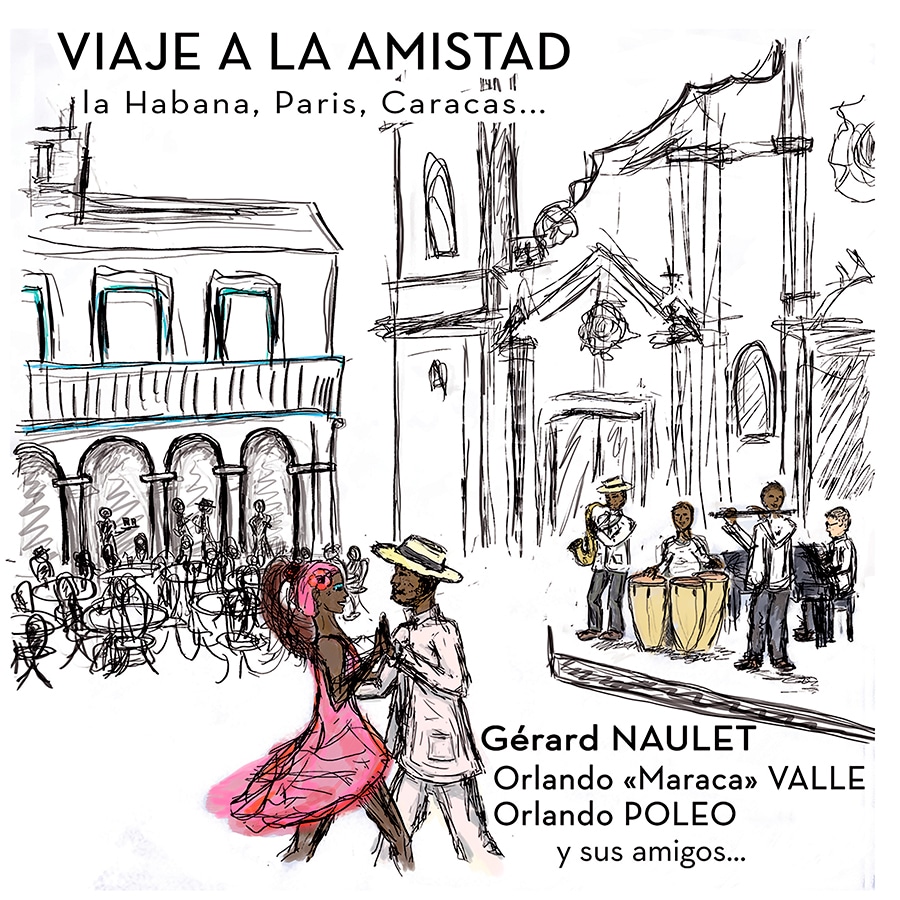 The Live and the Album.

A legendary venue of the parisian jazz scene hosted Gérard Naulet to celebrate the release of his last album on February the 5th. With its old warehouse look, the visible pipes on the ceiling, and its floor worn out by the passage of time, the New Morning was the chosen place to celebrate the friendship of three wonderful musicians.

“Viaje a la amistad” is indeed intended as a tribute to twenty years of musical adventures shared by Gérard Naulet (keys), Orlando “Maraca” Valle (western concert flute) and Orlando Poleo (percussions), as much as it is an homage to latin american music.

However, many other “amigos” are a part of the album: ten musicians performed in the recording. Three different double-bassists are invited : Felix Toca, Felipe Cabrera and Jean-Michel Charbonel, who unfortunately couldn’t attend the concert on February 5th. The band counts with two trumpet players, Tony Russo and Philippe Slominski (who also plays bugle in some tunes), tenor saxophonist Irving Acao and timbalist Simon Ville-Renon. Carlos Esposito is a special guest as vocalist and güiro player.

There is something festive in the air that night at the New Morning: the complicity between the musicians is obvious.

Gérard Naulet is perpetually delighted. Nothing could take away the smile on his face from the first song to the last.

Felix Toca, all dressed in red, puts his hat on his baby bass and dances with her to the “montunos”. Orlando Valle is unable to stand still. They call him “Maraca” since his youth because his afro and his slimness made him look like the instrument. He certainly is a remarquable flautist ; his phrases flow one after the other with amazing speed, each solo more frantic than the last. But playing the flute is not enough for him. In addition to playing and assuming the direction of the band, he also sings, dances, goes to the piano beside his friend or sits at the drum set left behind by the previous band. He is a show in its own right. As the musicians smile and sing the “coros”, the audience can only be left to its delight and share the joy of being alive, of singing, dancing and making music.

The set list combines covers and original compositions, traditional cuban music, salsa, boleros, danzones, descargas, and latin jazz. If the musicians aren’t all Latinos, they are clearly driven by caribbean music and are great soloists. “Alena” is a tune dedicated to Maraca’s daughter, which he wrote on the day of the recording. Sweet and moving, the piece perfectly translates a father’s tenderness for his little girl. The “maestro” Orlando Poleo (sometimes referred to as “one of the best percussion player in the world”), whose slightly behind rhythmical position gives all of the “sabor” to his playing, offers the tune “Arriba mi montuno”, a lively “descarga” with contagious coros. When Naulet performs the traditional cuban bolero “Obsesión” in duet with Slominsky at the bugle, his playing becomes more lyrical and unbridled. Like a tropical Chopin, he stretches out on his keyboard, full of romantic promises.

As he was presenting the tune, the pianist said “Let’s enjoy ourselves”. This is certainly the take-away from this concert: a moment of outright pleasure shared by the musicians and their audience, an enchanted and flavorful interval under the sky of the New Morning, which has seen so many other beautiful nights and will continue to harbor them.

« Viaje a la Amistad » is a Adlib prod album