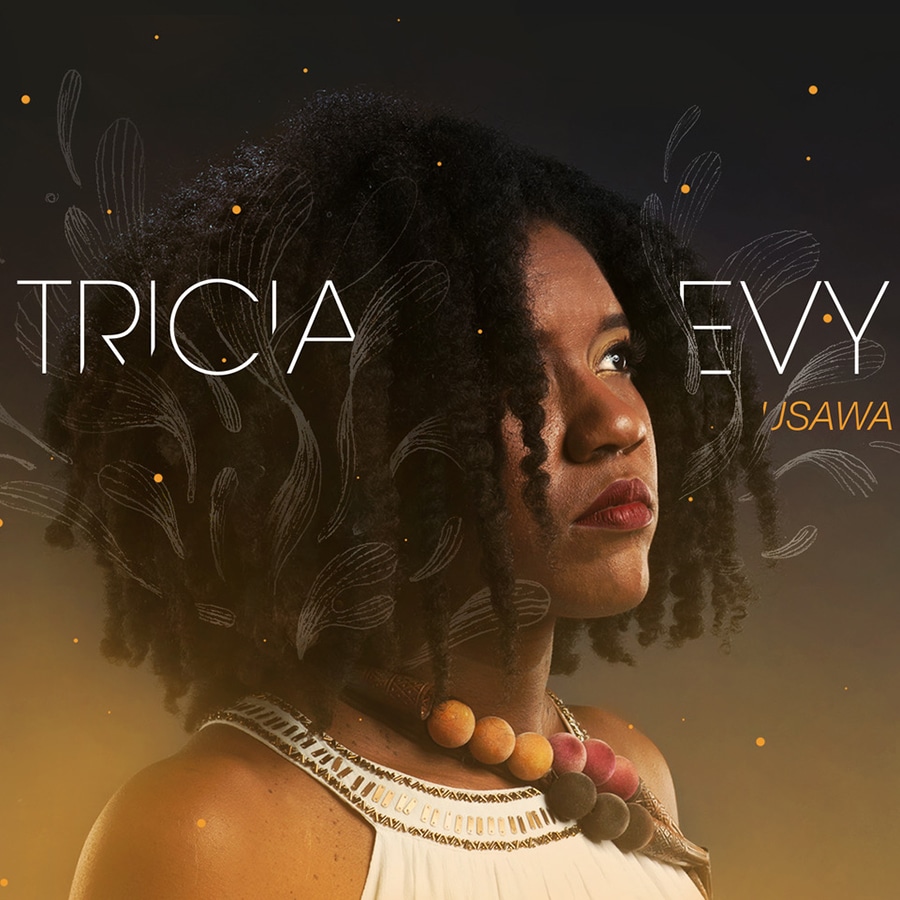 I say here, loud and clear, that Tricia Evy is a great jazz voice… And as she proves with the release of “Usawa“, she is also a great voice of the biguine.

To reduce her to a formidable vocal organ, as beautiful and talented as it may be, would be simplistic.

It is the main criterion at the TV show “The Voice”, isn’t it?

As the other night, Leo Rondon, an illustrious and prodigious Venezuelan cuatrist, told me, “Tricia has an incredible musicality in her”. A kind of 6th musical sense. Do you see what I’m talking about ?

It is clear: the timbre, the softness, the scat, the whispers, the hoarse which evokes great evenings with Louis Armstong. Everything is there: perfect technique, sense of the show, generosity, humor. A wonderful transmitter of emotions.

But Tricia has so many other qualities that I discover at each of our meetings, during a telephone conversation, during a concert in which she sings Brassens as no one else (and believe me, I am a deep connoisseur of Georges Brassens) .

She has melodies to sing and so many ideas to express; so many battles to fight with a deep conscience, live and clear.

She is not only a great singer, but a whole person engaged, which is not the same thing. The women condition, the blacks condition still today, the slavery, not so far away, our society, our planet, but also literature, the life nuggets, the reasons to laugh and to share together …

At this occasion, do listen to the interview she gave to Couleurs jazz (in French)

« Usawa », the balance in Swahili. Certainly, it means the balance between the inspirations of this album, between biguine and jazz therefore. A joyful way to affirm its Guadeloupean and Martinican origins, interpreting the most subtle melodies of these two islands, mostly unknown in our Parisian world. A real enchantment: “Moin ka felt an Love”, “Jou Ouvè”, “Doudou pas gentille” …

Don’t jazz and biguine have a common history, intimately related to the History of the black people?

So, the recovery of jazz heritage standards: “Take the A Train”, “The Thrill is Gone”, “On the Sunny Side of the Street” is more of a reappropriation to better make us rediscover these jewels. Thanks to her qualities of arranging, she argues with the talents of her accomplice in the matter, David Fackeure; she insists on this point: one must give to Caesar what is Caesar’s’! These standards are a new artwork in its own right. It gives us to love once again, these melodies which are so many Proust madeleines.

This is exactly the charm and overall of jazz, right? Arranging and reinterpreting all kinds of music for our greatest delight. And it is often in the interpretation of standards that one can compare, judge the quality of a jazz artist as an arranger and performer.

Here we are! First because of Tricia herself, then because of her brother, her friend as she calls him: David Fackeure at the piano.

What a complicity, what an interplay, what connivances! This is felt, both on stage and attentive listening to the album.

With these two protagonists, are invited on several titles, Pierre Boussaguet on the double bass, particularly inspired and the classical cellist – Tricia’s teacher at the conservatory – Michael Tafforeau, passionate expert on chamber music. The timbres close to the cello and the voice come into symbiosis, especially in “Golden Earings“.

The album ends with a nostalgic choro-bossa “Falando de Amor” by Antonio Carlos Jobim, which makes you want to fall illico in love and reveals Tricia’s third source of influence …

May be the secret of balance is into this triangle, Jazz, biguine, bossa?

“Tricia possesses this voluptuous gift, this ability to bend and inhabit the voice that savor with delight the fugitive moment when we perceive the invisible presence of a nearby happiness. In her scat improvisations, she offers us the pleasure of melting into the melody to become herself a melody of her whole being. Tricia Evy’s song brings this soothing, comforting, hopeful balm that our distraught world calls with all its strength. I think to find in her play, in her expression, the accents of ultimate sincerity, the heartbreaking soul nudity on the skin that made Nina Simone’s signature, unforgettable soul priestess”

A message to labels, turners, programmers, artistic directors of jazz festivals: before Tricia Evy joined the stars … Invite her now!

Your large audience will reward you and you will be grateful. This third album by Tricia Evy is a little gem of emotion and colors. It may be is a model of equilibrium (Usawa), it has however made the sailor that I am, sink!

Before you rush to her next album release concert, or at the record store in your neighborhood, Couleurs Jazz offers you one (or more) full enthusiastic listening :