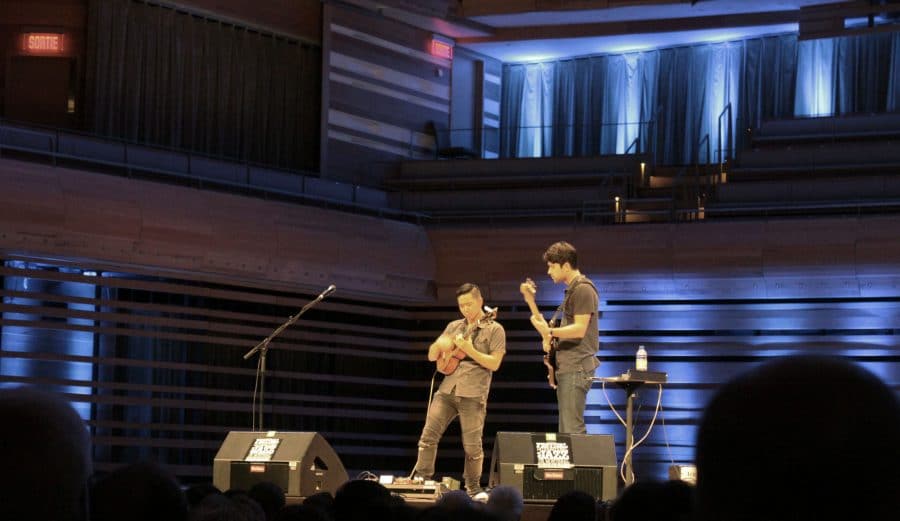 The choice for the 7th night of the series Le Festival à la Maison Symphonique is a big one. The combination of Hawaiian ukulele virtuoso Jake Shimabukuro and Australian guitar master Tommy Emmanuel turns out to be the best bet to fill Montreal’s Maison Symphonique on the 5th of July’s warm night. The program is a double one, as each musician gets a 90-minute set to play. Tommy Emmanuel presents his latest album, It’s Never Too Late.

End of the road and a huge room appears. Covered in soft, light wood. A sea of seats.  A big stage. A magnificently high ceiling, spots of white light splattering the whole auditorium.

And a huge organ upside down, dyed in blue as long rays of blue light illuminate the back of the stage.

And slowly the lights get softer. Half-darkness takes over. Someone starts clapping even before the door on the left side of the stage opens.

Hands clapping desperately. And he comes out.

A bright smile and a hand in the air. With the other one he holds his beautiful brown ukulele. A bass player as his only companion. They look at each other. Smile. Complicity.

Jumps, bends his knees, steps backwards, forward, plays side-faced. Perfect symbiosis between the sounds he produces and the way he moves.

There is an energy drifting from the stage and to the corners of the Maison Symphonique.

It comes straight from Jake Shimabukuro’s heart, traverses the ukulele and his utterly fast hands, scrapping it, and goes under the seats, it squeezes between the slits of the doors, inside the tubes of the organ, in the creases of the scarf that the girl dressed in red has just wrapped herself with.

He is warm, happy, close and honest – not afraid to open himself in front of an audience that seems to be holding its breath every time he approaches a solo.

No pretentions, no expectations – just the music and the feelings he carries within himself turned into notes and loops and visual images built from his soul and his energy.

And that energy is two-sided, as it feeds on the admiration and emotion of the audience. Eyes wide-open, minds wide-open, hearts wide-open and impetuous and impulsive stand-up moves when he ends a track.

He does that unexpectedly, garnishing the conclusion with a sincere and rock-star-like “yyyyeeeeaaaaaaahhhh”, shaking his fist with his only companion on stage, the bass player, and provoking smiles all through the audience.

His playing is touching and impressive, as the speed of his chord progressions seems to quicken. Solos that show concentration and a long-time practicing. Closes his eyes and picks influences from jazz, soul, blues, funk, classical, flamenco… reminiscences of Arabic tunes as well, perhaps? He seems to go through the whole history of music genres in one riff and then weaves an extremely rich melody.

And then come the versions. Of Queen’s Bohemian Rhapsody, of The Beatles’ While my guitar gently weeps. Such passion, such new and completely different sound worlds emerge – yet still he maintains the same joy of music-making, the same extremely fast solos – in perfect communion with the melodies that come from the bass.

“You know, it is a great pleasure for me to be here. And to play before Tommy. He has always been one of my biggest inspirations and I feel thrilled.”

And when Tommy Emmanuel comes on stage something strange happens. As if somehow Shimabukuro was still there, but had grown and evolved and got bigger, musically.

Again solo string instruments, again as if that same capacity to fill such a huge auditorium with so little was being proved. However, this time there is just one instrument. Even if it sounds like two people playing at the same time.

The energy and power of the music is still huge, as well. Quick moves, a lot of facial expressions, incredibly gifted hands that play quick, quick, quick and in crescendo.

Emmanuel has three guitars on stage, and changes often.  He makes jokes about how he saves money by playing with no band.  In the middle of a solo he just throws the capo in the air and looks at the audience with a sarcastic expression.

Pulling pearls of laughter from the seats of the Maison Symphonique. Picking the strings, tickling the guitar, closing his eyes. He unites influences and drifts from blues, folk, country, gypsy, jazz… One same song can become a rollercoaster, can start up there, high in the sky, and finish down there, under the carpet inside the grey corridor.

But still, it carries the essence and exhibits years of practice. Years of trying to capture experiences in music. Years of trying to turn some guitar-playing into a true communication tool, able to tell stories of imaginary characters or very real personas.

But overall, that music is about beauty, about carrying hearts and filling an overwhelmingly big auditorium with a true touch.

Both Jake Shimabukuro and Tommy Emmanuel have the touch. And it is hardly unbearable to let those string sounds caress the pores on the skins of all the audience sitting in the Maison Symphonique, as their truth strikes with strength.

That is the reason why, when Shimabukuro comes back on stage and Emmanuel and him play together Jimi Hendrix’s Purple Haze, something big is happening. They are jamming together, they are chaining solos, looping, picking each other’s instrument’s last words to give them a turn and throw them straight into the air with power and renewed life.

It becomes evident why the Montreal Jazz Festival decided to create a double program with Shimabukuro and Emmanuel, as it can be sensed how the former has evidently been influenced by the latter. Similar patterns that, however, do not step one on the other as the directions they have taken are different. They still keep each one’s clear sound. Each keeps their uniqueness.

Emmanuel’s voice is dragged, soft, blurred and interesting, making it difficult to define its colour, as it is made of a mixture of tones; just like his guitar playing. Just like the way he approaches the instrument in itself, ignoring the fact that it was meant to be used to play the strings and not as percussion. He just does not care: picks a drums brush and while he beats every single corner of the body of his guitar, he occasionally hits the microphone with it. And he creates an amazing percussion solo, standing in odd positions, hugging the guitar strangely.

And thus after more than thirty years side by side with his instrument he still knows how to touch hearts and make beauty. And in the same way he puts an effort in explaining to his audience why and how he does what he does, those lines can be read in his songs.

“I wrote this song for my 18-month-old daughter, when touring around Poland. When I played it to a young Polish guitar player that was travelling with us, he said ‘oh, a minor song with optimism’. So here it is, ladies and gentlemen, let it fill your heart with optimism. Rachel’s song, It’s never too late.”

And not only did it fill the hearts, but the whole building trembled in optimism.