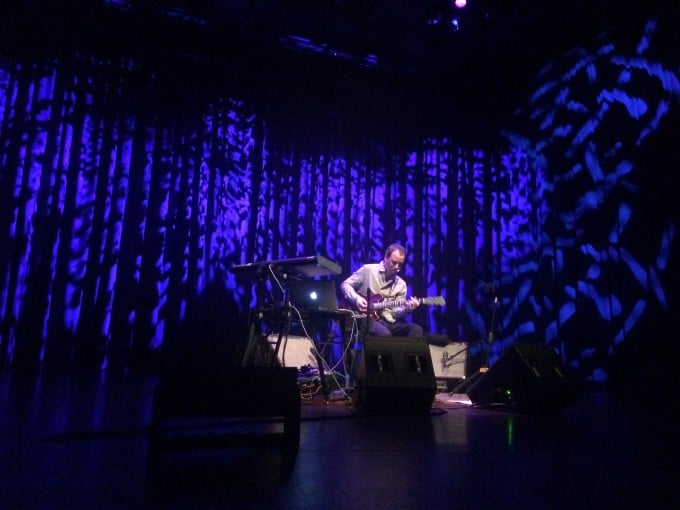 It is strange for any festival to repeat artists from one year to the other.

However, the Barcelona International Jazz Festival did it this season,

on the 18th of November to the Mediterranean city, that dresses up in jazz

every fall. An there is not a single doubt that the Festival was right, as in

The cold tries to get to Barcelona. But it is not the right time yet. Instead, it is the

Jazz Festival the one who arrives. It spreads around, conquering venues all over

the city from the 26th of September until the 11th of December. The International

jazz appears) repeats this year a one of the big names, and that makes it even

more impressive that it is the second time in a row in Barcelona. 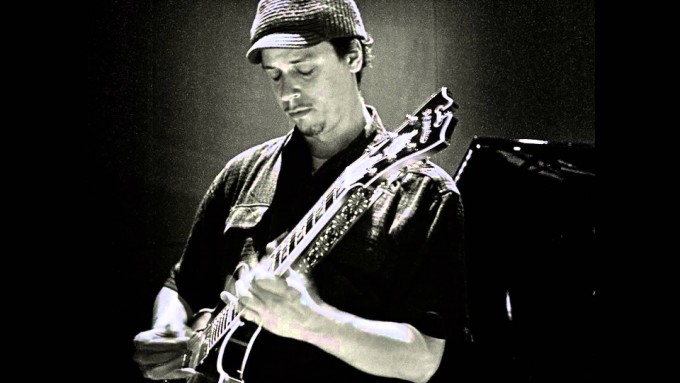 Kurt Rosenwinkel comes flying from Berlin, where he teaches music at The Jazz

Institute. This time, unlike last one, the guitarist from Philadelphia appears alone

on the stage, in the Sala 2 at the Barcelona L’Auditori. Or maybe not that alone.

His guitar and a bunch of sound systems surround him. Amplifiers, synthesizers,

mixers. A keyboard, an iPad playing the role of the lectern, the illuminated apple

on his MacBook, on the table, buried in cables.

Quite an interesting staging. Nearly mystic? All his electronic tools create a circle

around a chair, still empty. It reminds of an altar, quite a similar to a pagan

sanctuary, ready for a ritual in the middle of a forest. The waiting has turned into

a state of trance, and the dark blue lights projected on the walls feed the oneiric

He gets in dressed in large trousers, black trainers, a clear shirt. Rabid applauses.

He smiles. Good vibrations. He looks at the guitar. Caresses it. She speaks… and

so does him. He accompanies her, sings with her. Low, very low, nearly

imperceptible, nearly as if it were a tic. But the microphone betrays the intimacy

of that personal chant, not meant to be public. Curiously, the projection of that

decided to give a turn in his artistic production, due to a crisis he had in the

middle of his career. He felt disconnected, separated from music and he decided

to turn around what he was doing. Changed the tuning of his guitar and started

to add his voice to it. From that twist Zhivago was born, part of the album The

Next Step, which would soon become one of the most acclaimed in his carreer.

Maybe he felt more himself that way?

It looks like it, indeed. It could even be smelled. And to that, the illumination in

L’Auditori has to be added. As sublime as always, it changes and surrounds the

musician in a spiritual way after every tune.

That voice at ground level, next to the guitar and the games of echoes,

Imaginary friend, State of the heart, the Ugly Beauty of Thelonious Monk.

melody. Touch on the iPad and… surprise, notes repeat themselves. And go on.

And go on. And he starts to play on them. Five tunes are on –quite long, by the

way- and he is not even tired, as while he starts making the guitar moan with one

hand, with the other he caresses the keyboard. He leaves its howls go on and on

repeating themselves and he goes back, with all his concentration, to the chords

of his self-tuning guitar. 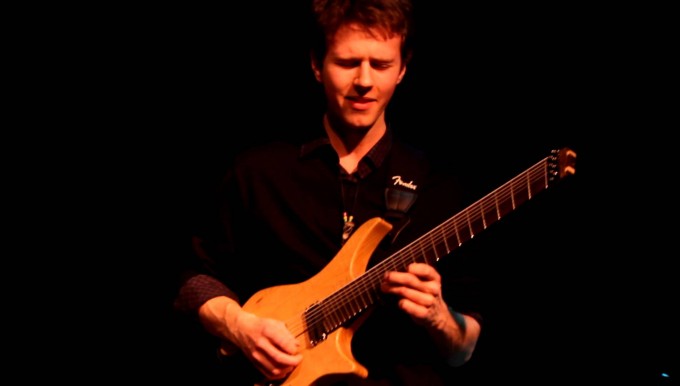 And he goes on like that, moving his hands as if they were tentacles, from the

chords, from the chords to the iPad and so on. He swings a little bit. He stands up.

He closes his yes. He has got a tic and his eyebrows are constantly moving. But at

the very beginning, still when there has been not enough time to react, those

following the rhythm of the melodies he weaves.

band, the Rosenwinkel that was in Barcelona during the last edition of the Jazz

Festival, that completely filled the Barts venue in Barcelona, playing with all the

energy of his Matosinhos Jazz Orchestra.

The concert finishes. He leaves, and the applauses drag him back on the stage.

Before he starts playing, before he picks up the guitar once more, he talks about

the terrorist attacks on the 13th of November in Paris. He talks about a friend of

his that he has there, and reproduces a conversation:

–Man, this world is crazy.

Maybe Kurt will have to find something else to do in order to fix the world, as he