By Jacques PAUPER22 September 2022No Comments 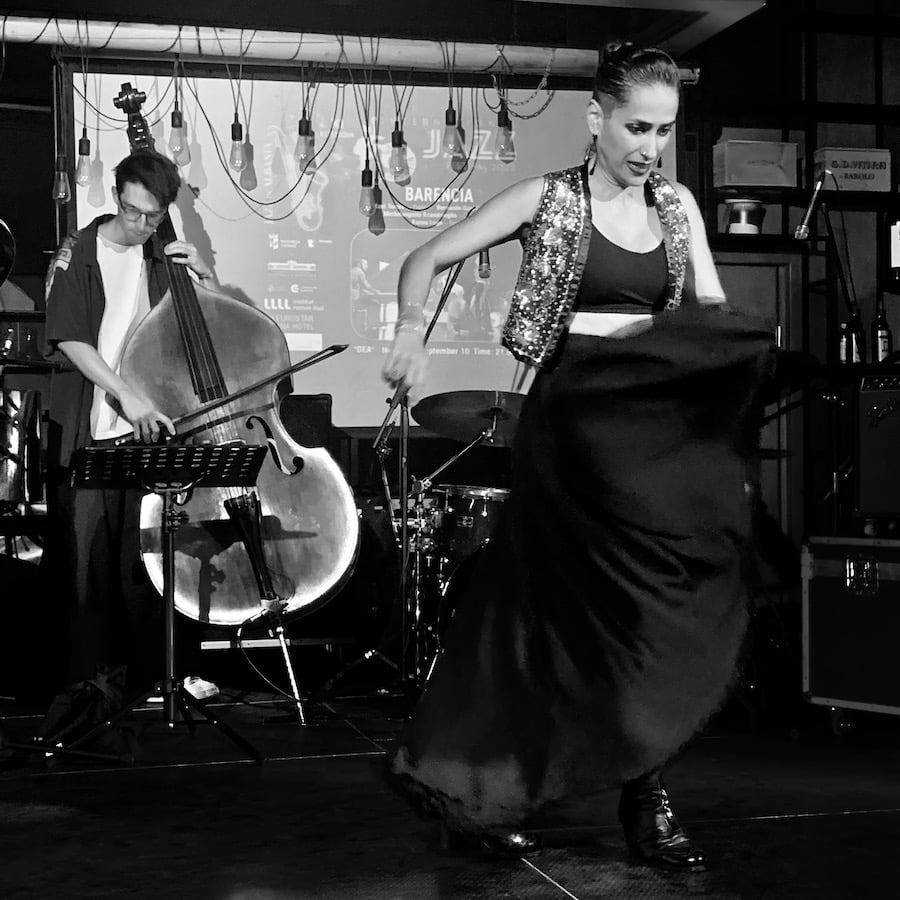 The 11th edition of the International Festival Jazz in Albania took place from 7 to 11 September 2022. The partner cities of the event were the capital Tirana, Fier-Apollonia and Skoder

As a preamble to the festival, a first dive into the jazz atmosphere by visiting the « Hemingway Jazz Club » of Tirana. A magnificent jazz club run by passionate people in which the Albanian jazz scene performs as well as the jazzmen and jazzwomen who come to the capital. 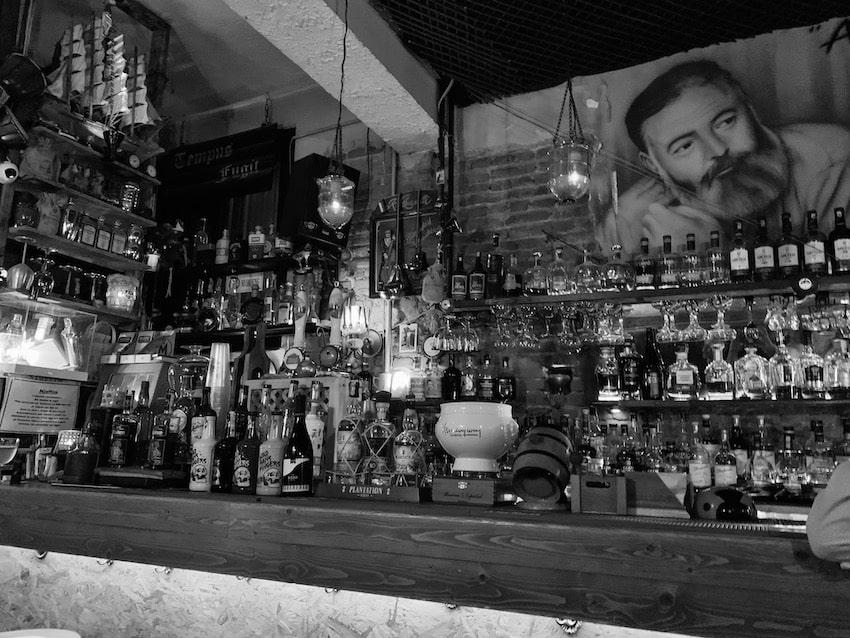 In a very warm atmosphere, you can find the best malts and rums from the West Indies or the whole Caribbean arc, listening to live jazz or enjoying the terrace. Couleurs Jazz recommends you this address in Rruga (street) Kont Urzani in Tirana! 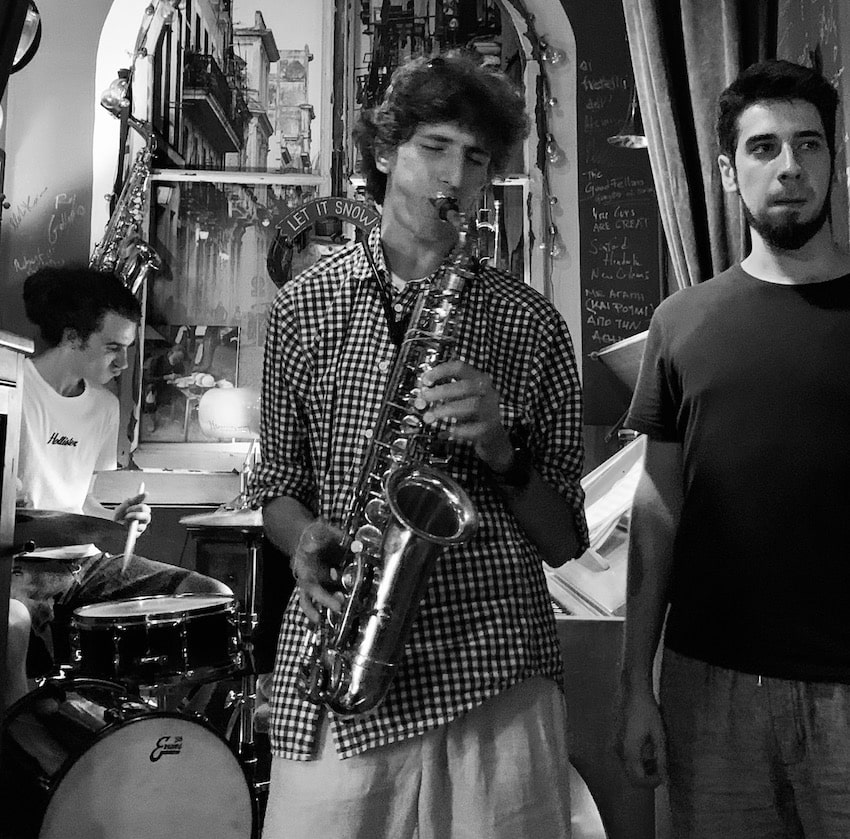 That evening, Nikola Miloradovic, a brilliant young Serbian saxophonist, was jamming. Andrej Maksimovic was on trumpet, Jovan Cvetkovic on piano and Teodor Janevski on drums.

Fier, nice city in the southwest of Albania, close to the Illyrian archaeological site of Apollonia.

Opening of the Festival, at the Bylis theater, the Chambery Quartet.

A quartet set up for the occasion by the city of Chambery in the framework of the Jazz-France-Balkans exchanges. 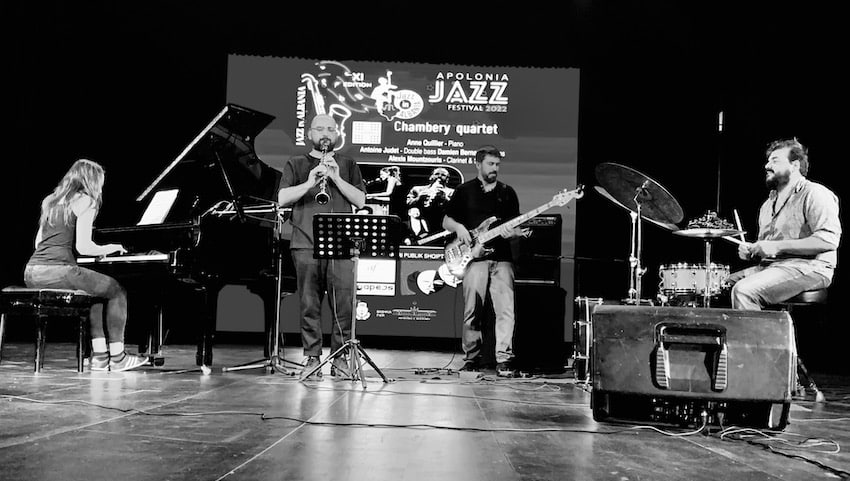 Anne Quillier is at the piano. A minimalist play in the vein of Eric Satie, themes presented with delicacy dialogue with the clarinet of the Franco-Greek, Alexis Moutzouris who brought for the occasion, colors of the Balkans and more generally of the Mediterranean. A good part of the local spectators are happy, they have their bearings. The rhythmic is assured by two acolytes who know each other well, Antoine Judet on bass and Damien Bernard on drums.

The musicians are extremely concentrated, as if in their own bubble. They were only able to rehearse a little. It seems that a good part of the audience from Albania, also coming from Serbia, Montenegro, Northern Macedonia, Dijon, Chambéry and Paris enters their music.

An evening which, for the opening of the Festival held its promises.

The evening begins with the Tirana Youth Jazz Orchestra, led by Gent Rushi, who is also the artistic director of the Festival. Several members of the orchestra – Tirana is the European Youth Capital in 2022 – come from various neighboring Balkan countries. 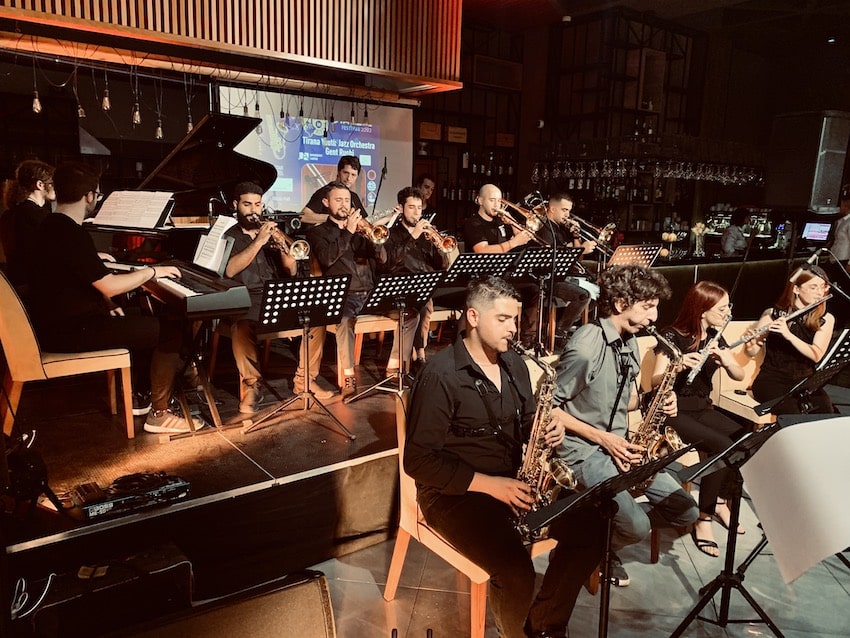 The saxophonist Nikola Miloradovic is particularly noteworthy. A remarkable work of Gent Rushi at the head of this jazz big band. 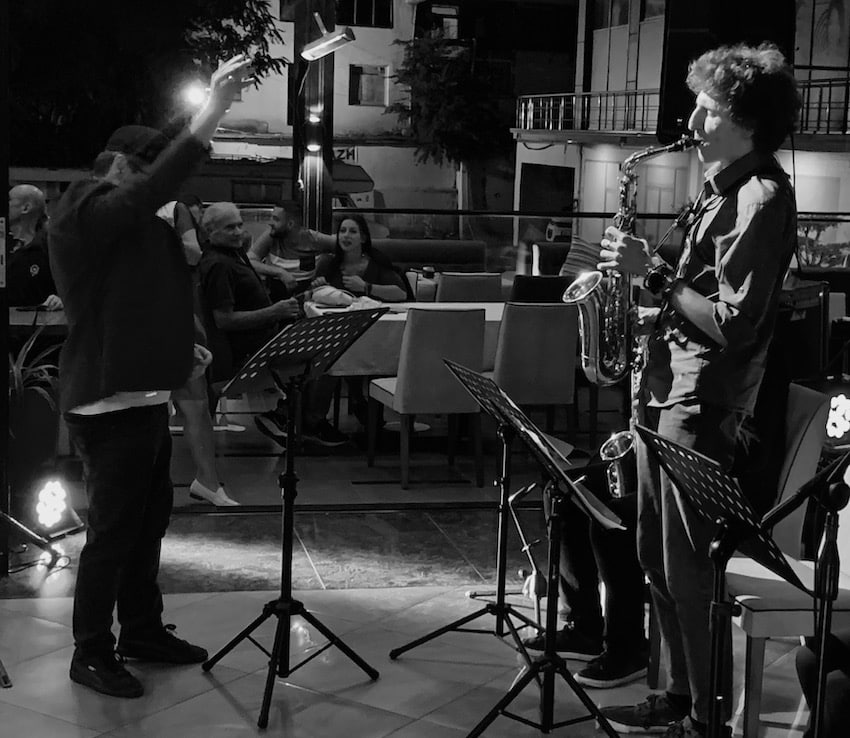 You can feel the osmosis, the pleasure of playing together and the respect that these young talents have for him, as shown in this video.

The Bugala Quartet, presented by the City of Dijon and Media Music, took to the stage. with violinist leader, Caroline Bugala.

Virtuosity, interplay, coherence in these festive and breathtaking jazz fusion creations, skilfully alternating with destructured and then reconstructed covers of superb standards by Django Reinhardt and Stéphane Grappelli. The public is delighted.

In the role of Django, we must note the performance of Christopher Peyrafort.

The constant dialogue in communion with the audience is supported by a first class rhythm section: Victor Pierrel on bass and Tom Moretti on drums. 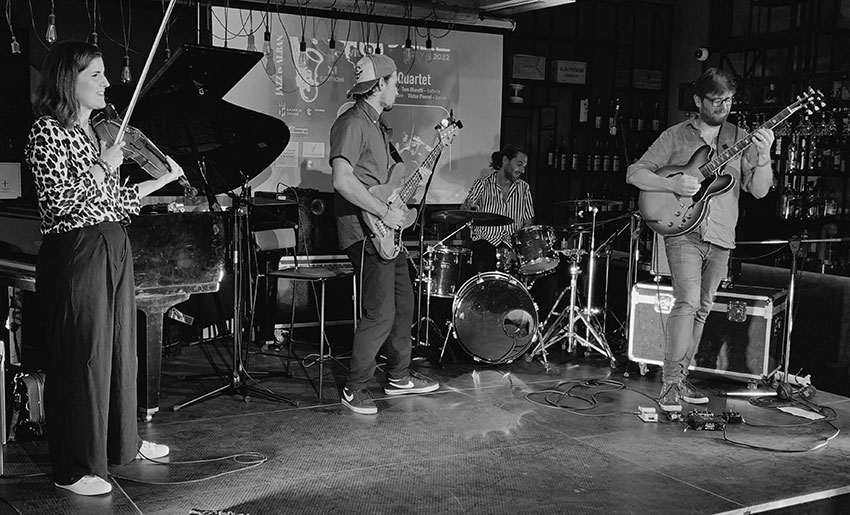 This beautiful evening ends with the European Trio (Slovenia, Israel and Hungary)

Music and jazz in particular means no borders. A trio in the great tradition, piano, bass, drums.

Ari Erev, Israelian is on piano, Tibor Csuhaj-Barna, Hungarian on double bass and the Slovenian Gasper Bertoncelj on drums. The latter is part of the album “Close To Home” released last June and selected on Couleurs Jazz Radio, several tracks of which are included tonight during the concert.

A jazz that highlights the long-standing passion of Ari Erev and his companions for world music and in particular, Latin colors. The very melodic pieces are rich with beautiful and delicate harmonies.

That evening, an Austrian-Albanian duo was playing in the North of Albania, near the border with Montenegro, in the town of Skoder.  As we could not split into two, we could not attend. It doesn’t matter because we will meet them the next day in Tirana.

One of the magnificent surprises of this festival awaited us in the first part of the evening with the quartet BARENCIA – composed of 3 musicians; the Catalan pianist of Barcelona Xavi Torres, a very effective Italian rhythmic, originating from Florence: Michelangello Scandrioglio with the double bass and with the drums Bernardo Guerra and finally an extraordinary Mexican dancer: Karen Lugo. 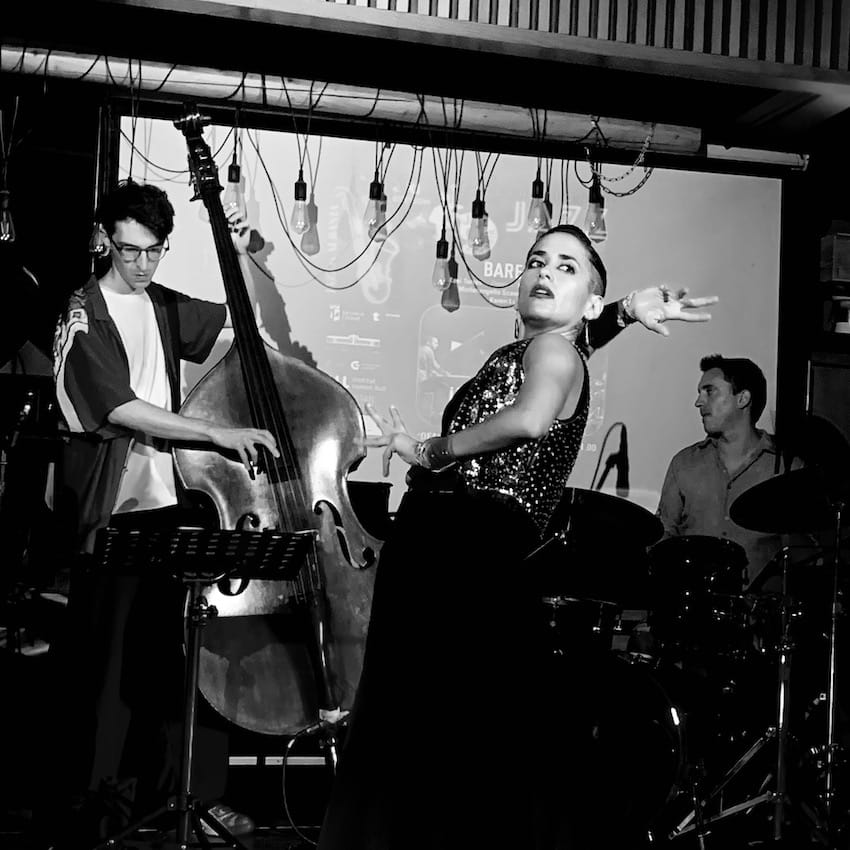 Barencia is an imaginary city, a point halfway between Barcelona and Florence. It is a unique fusion of different traditions, a magical alchemy that creates a spectacle of encounters between music and dance, between flamenco and jazz. 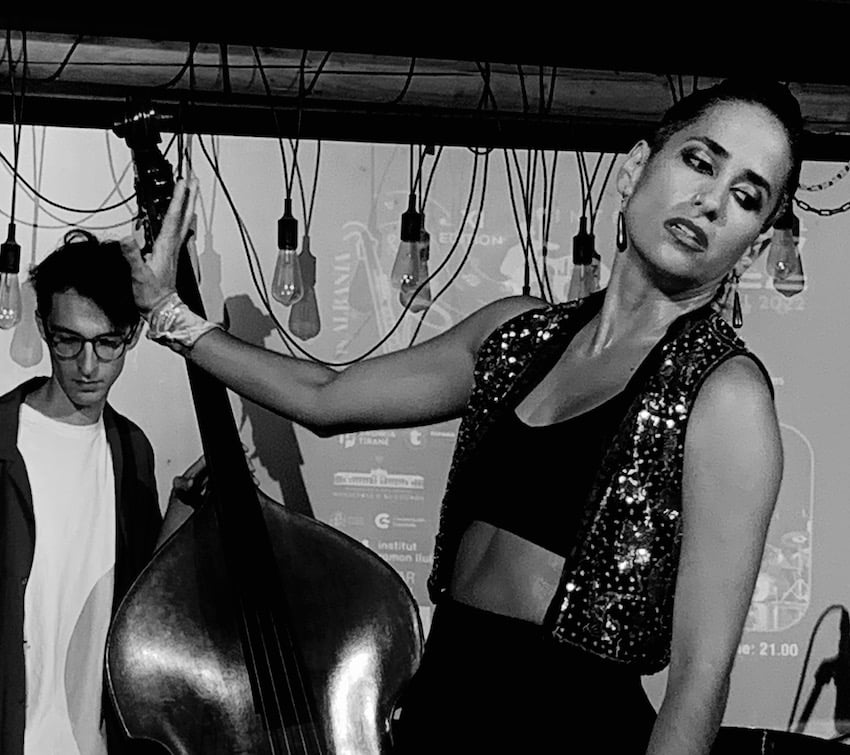 A really great jazz-flamenco, modern, brilliant, revisited. A show of high quality where the codes of flamenco are perfectly assumed in a very current version and where the dialogue as much gestural as musical takes again the codes of jazz in original improvisations.

It is perhaps the only concert during which the noisy waitresses behind the hotel bar stop handling the dishes. They remain speechless, as does the whole audience, in front of the gracefulness of Karen Lugo, who will be dressed in different outfits and who perfectly masters the tap dance, the tap dance, and the language of the fan.

After this coup de grâce, the Austro-Albanian duo Erasmus and Rodi (saxophone & folk guitar) offer us pure improvisations far from jazz, in a very personal style, particularly free, which disconcerted a large part of the audience. 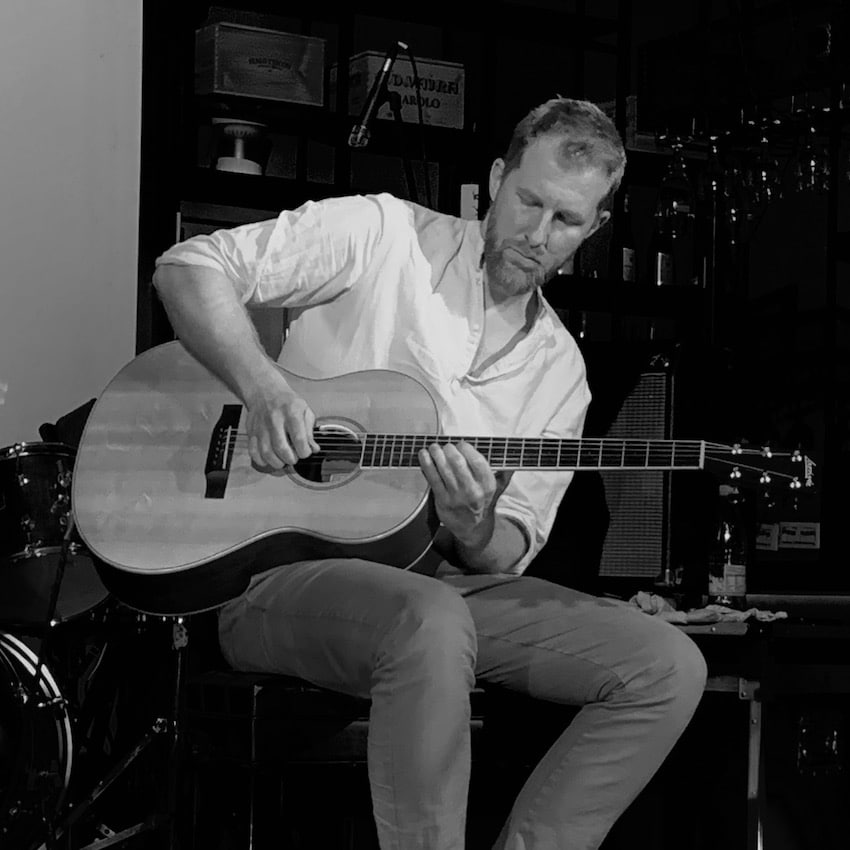 During this closing night, a bassist-heroe is the man of the evening! his name is Roni Gjura. He will be the bassist of the three bands which will follow one another on stage. 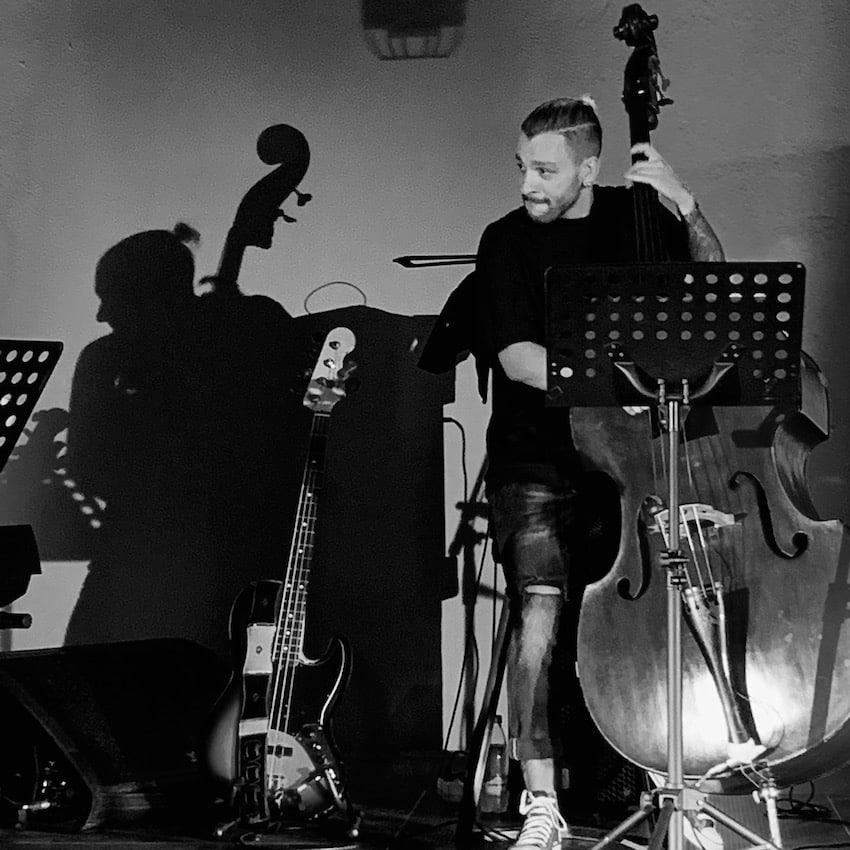 Starting with the quartet of the Israeli singer Daphna Levy accompanied by a friend percussionist Daphna Yanay, Gent Rushi is on piano.

Let’s avoid any comment, except that the Israeli Jazz scene is so rich that we do not understand this choice of the embassy on the spot. 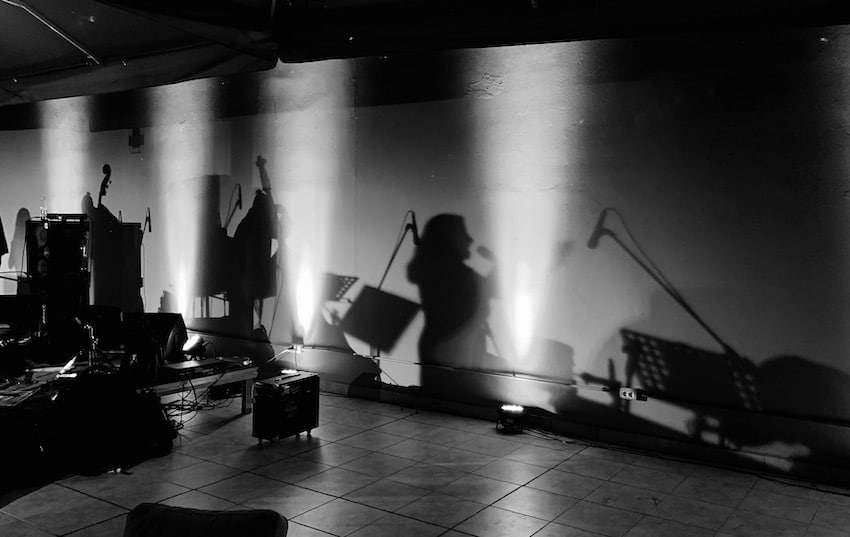 Anyway, after this first part which allowed at least Roni Gjura to warm up, a new magnificent surprise was waiting for us with a band with a predestined name: the Just Trio. A local trio that doesn’t just play, but plays right (juste in French)! 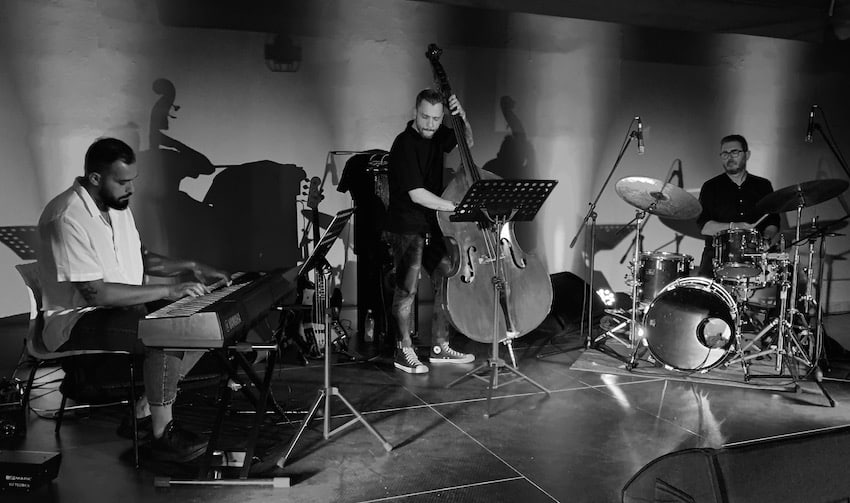 What an interplay between the three very talented musicians ! What a jazz at the same time modern and with the accents of the Balkans, on the side of the country of Eagles! Three eaglets fly in the sky of Tirana. At the side of Roni Gjura, both bassist and double bassist – he started his career as a double bassist of the National Orchestra of Albania – the maestro, Mateo Gjipi on piano and Emiljan Dhimo on drums are emerging.

Sense of swing, rereading of the codes of jazz, elegance, virtuosity, creativity and very beautiful and original compositions, signed alternately by the three members.

One hour only, it is too little! We hope that the programmers and artistic directors of the Festivals of the big European cities will program them soon.

To close this evening, we are waiting to discover the trio of this globe-trotting crocodile of the Festivals, the Dutch keyboard player, Mike Del Ferro with a young genius of the harmonica, Rega Dauna from Indonesia.

Alas! the administrative hassles of the Border Police will not let the latter enter Albania for a one night concert, because his visa is only valid within the Schengen Area… As if the young musician dreamed of staying in Albania more than expected!

No improvisations in these areas.

What a pity! But the trio composed – once again – of Roni Gjura, Albania on bass and Roy Dackus, Dutch compatriot and old accomplice of Mike del Ferro on drums will pay tribute to the music of Toots Thielemans in a very beautiful way with an infectious enthusiasm and a very professional talent

Thus ended for us this 2022 edition of the 11th Jazz in Albania Festival.

A few free hours on Monday before getting back on the plane, allowed us to enjoy our guide-driver, Hassan, a musician who has been living in Besançon for a long time and is passionate about the history of his beautiful country.

A high hat goes to the organization of the Tirana Jazz Festival and its director, Besim Petrela, who has a great sense of hospitality and who unanimously delighted the French delegation of the “France Balkans Jazz” network as well as the representatives of the cities of Dijon, Chambéry, Podgorica, Nis, Bitola, as well as the associations producing jazz concerts and festivals in these different places.