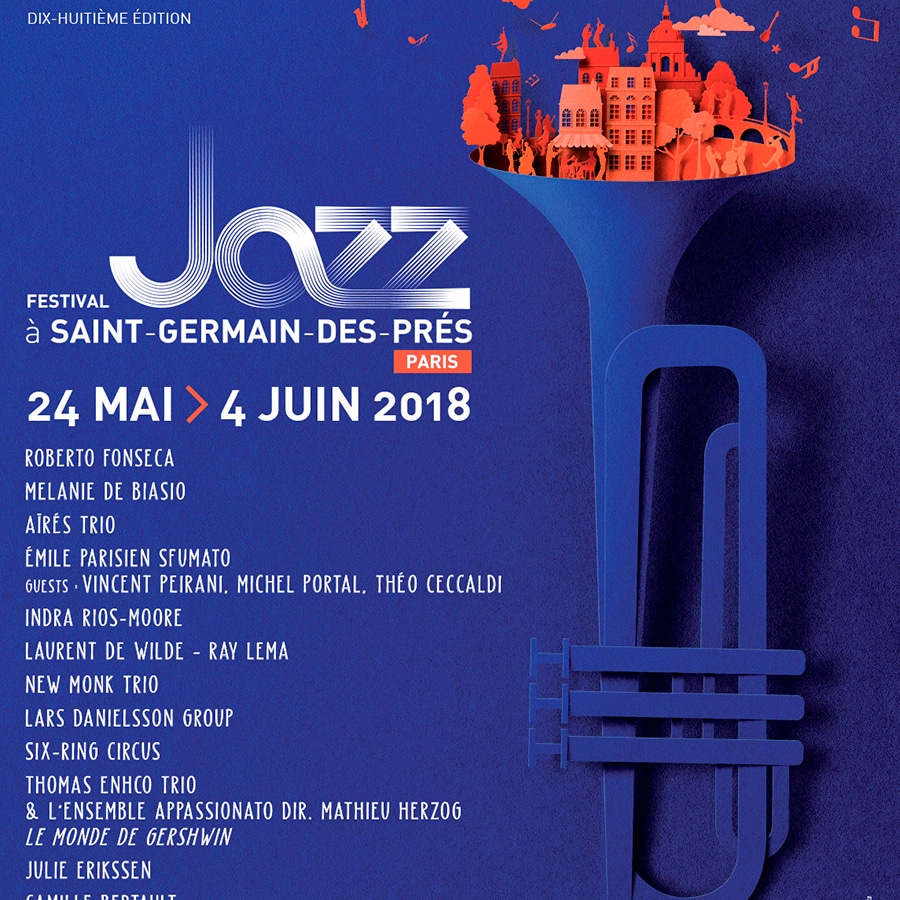 Jazz in Saint-Germain-Des-Prés revival, in the mythical district, historic landmark of jazzmen in Europe …

This is the crazy bet that launched Donatienne Hantin, Frédéric Charbaut and Joël Leroy (†) when they decided to create in 2001, the Festival Jazz-à-Saint-Germain-Des-Prés, Paris. Over the years, guided by the humanistic values of its organizing association, L’Esprit Jazz, the event has become a staple of Parisian musical life.

On the occasion of this 18th edition, which will be held from May 24 to June 4, 2018, the Festival will give rhythm to the cultural life of this Paris area by offering, in addition to the evening concerts, musical entertainment on the Place Saint-Germain-Des-Prés. , exchanges with the artists at the Café Les Editeurs or even Jazz & Meditation workshops at the Lucernaire Cultural Center (an unusual sensory experience, inviting you to listen to music differently). Committed to promoting the emerging Jazz scene, the festival will also showcase the new generation of musicians during Jams sessions at the Lucernaire or during the Tremplin Jeune Talents organized  at the Sunset-Sunside.

As for concerts, Frédéric Charbaut unveils a daring program, an artistic bias that contributes to give the Parisian festival, one of the very few downtown, all its identity and singularity.

May 24, stopover in Cuba for an evening event: Roberto Fonseca will start at the Grand Amphithéâtre de l’université Panthéon-Assas. Back in trio with Yandy Martinez Gonzalez (double bass/electric bass) and Raul Herrera Martinez (drums), the Cuban pianist will perform the titles of his last two albums« Yo » & « AbuC ».

May 25, again at the université Panthéon-Assas, you will be able to attend during the first part of the evening at Airelle Besson (trumpet) Aïres trio, Stéphane Kerecki (double bass) and Edouard Ferlet (piano), 8 years after their first album, an original and elegant encounter between Jazz and Baroque.

The saxophonist Emile Parisien will take over and share the communicative energy of his project “Sfumato“, sacred “Sensation of the year” at the Victoires du Jazz 2017, in the second half of the evening. He will be accompanied by the original quintet of the album, to which will be added the immense Michel Portal (clarinet) and the rising stars of the French scene Vincent Peirani (accordion) and Théo Ceccaldi (violin)!

May 28, the Jazz invites itself in the sumptuous amphitheater of the Sorbonne for a concert tribute to the famous American composer Georges Gershwin. On the occasion of the 120th anniversary of his birth, Thomas Enhco‘s trio and the Ensemble Appassionato directed by Mathieu Herzog will celebrate the great orchestral works of this music genius. A unique creation in an exceptional and inaccessible place: the evening promises to be grandiose!

May 29 , at la Maison des Océans, Indra Rios-Moore, the New York singer  living in Barcelona, will perform songs from her latest album “Carry My Heart“, with touching covers from Gershwin, Duke Ellington and Steely Dan. A unique voice, chiseled arrangements, supported by a quartet from the North: Benjamin Trerup on saxophone, Søren Bigum on guitar, Thomas Sejthen on bass and Knuth Finsrud on drums.

May 31, at la Maison des Océans, second part of the evening: Laurent de Wilde comes back with his trio, to perform tribute creations to Monk, and from his latest album released at the end of 2017, “Prix du Disque français 2017” awarded by the Académie du Jazz. He will be accompanied by Jérôme Regard on bass and Donald Kontomanou on drums.

Second part of the evening: Lars Danielsson Group comes back at the Festival (The group presented its Liberetto II in 2015). This year,Llars Danielsson group will present the third part of the project, a deeply hypnotic music, eclectic, lyrical, with a great sense of groove.

June 2, at La Maison des Océans, Jazz evening for women. In the first part of the evening: Julie Erikssen, with an inborn swing and a very good technique. The public discovered her during the TV show “The Voice“. She invites us to enter her elegant jazz universe, around her album “Out Of Chaos” released last February.

In the second half of the evening: Camille Bertault, for the release of her album “Pas de Géant“, in reference to Coltrane’s “Giant Steps”. The singer offers a concert with refined notes and words full of mischief. A crazy world to discover!

June 4, at Théâtre de l’Odéon: Mélanie De Biasio, the Belgian singer and flautist will perform at the closing of the Festival, the titles of her fourth and last album “Lilies“. A very personal music, intimate, original, unclassifiable, attracting an audience not necessarily jazz. A rather unique tone of voice, a true personality made of sobriety and a certain detachment. A unique universe, heavenly, sometimes murmuring, sometimes jazz blues, sometimes on the borders of psychedelic pop.

No offense to Guy Béart who sang in 1960 “There is no more after at Saint-Germain-Des-Prés”, the festival proves again with this edition, that the soul of Jazz continues (and will continue ) to make the Germanopolitan district vibrate.

The details of the evenings and the prices are accessible directly on the Festival site.