By Christian Grimauld5 November 2016No Comments 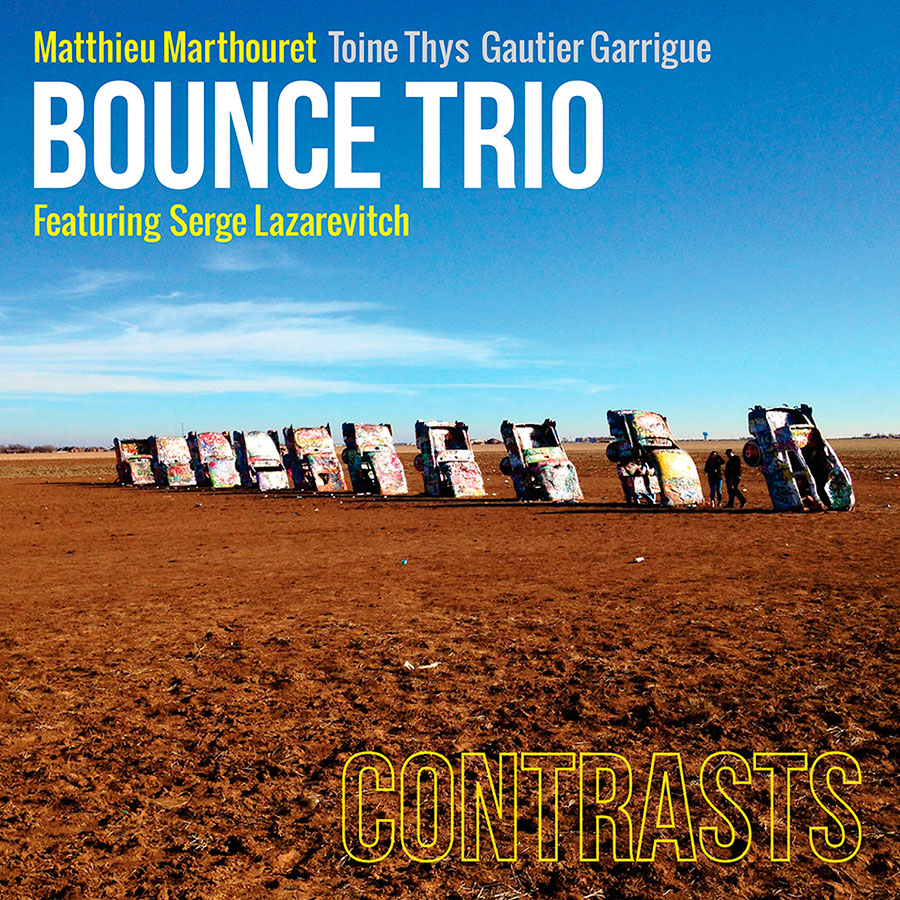 A modern Jazz, inspired, influenced, varied, with groove and emotion (which is essential, isn’t it?)

Original songs composed mainly by Matthew Marthouret and also by Serge Lazarevitch,  improvisations and standards as « Shine on You Crazy Diamond » from Pink Floyd, or « Kind Folk » from Kenny Wheeler.

Couleurs Jazz : Matthew, can you explain what is the project “Contrasts” and already, why this title?

Matthieu Marthouret : I chose this word because it is common to many languages, which is convenient, while music is often regarded as a universal language …

It is often used for pictures, but it is also used sometimes to describe sounds atmospheres: a synonym of “shades” somehow …

I also think that contrast is the variety and this is what makes things interesting. In other words, it is the source of much richness: if everything was standardized, then what a boring world, no? Finally, this word represents jazz in general and especially my musical universe.

With BOUNCE Trio, we may as well reappropriate Thelonious Monk’s or Wayne Shorter’s compositions or standards from Pink Floyd, Burt Bacharach and Stevie wonder: it does not prevent the cohesion of the overall sound which is then provided by the sensitivity the interpretation of each musician but also the tastes and references we have in common.

CJZ : To explain music as you quote excellently Thelonious Monk, in your FB page, “Trying to explain music, it’s like trying to dance architecture.” Can you therefore attempt this feat (without necessarily explaining your music), say what led to the creation of this album?
MM : First of all, music is my passion since adolescence and I have devoted myself full-time for more than fifteen years: it has therefore become necessary to my personal balance…

Then it takes another dimension when we share this pleasure with other musicians and we have the opportunity to share it with the public: once you have tasted it, our role as artists makes sense and this feeling becomes a key driver…

I also think that this is a creative spirit and a need to document the result of a job with a regular group that guides the artists because today with a dying discography industry, it is very rare for a musician to be offered  material and logistical resources to record an album

It is also a way to promote yourself, because in the music business as elsewhere, musicians are often forced to regularly have something new “for sale” …

As for releasing two albums within two years with the same band is increasingly rare! But having played a lot with Bounce, the public feed back is also something essential.

All this led me, as more and more musicians, to make the choice of autonomy, by creating my own label. I now have a tool to reduce the number of intermediaries and I am much less dependent on constraints of the few labels calendars providing real support to musicians and their career development …

However, this freedom is paid in time, with many hours spent in logistics and administration, but it is a rewarding experience that offers a wider vision of the business!

To get back to the BOUNCE music, the songs that I write for this band are usually built on small rhythmic cells and often with a cyclical harmonic frame.

When I created this trio in 2012, I wanted to compose songs with more condensed structures and a little less “written” than with my previous band ORGAN QUARTET, with the aim to allow maximum room for interpretation and improvisation.

The “bounce” in jazz, is the swing, the groove … So the rhythm in the broadest sense of the world!

CJZ : What are your influences? The music and musicians or bands that inspire you?

MM : Difficult question because there are so many, conscious or not and it never ends to discover interesting artists whatever the labels!

But I would cite willingly:

And since we are into quotes, Duke Ellington also said: “There are only two kinds of music. Good and bad”

CJZ : A word about the choice of musicians who compose your trio + Serge Lazarevitch ?
MM : John, Brian and Joshua (Scofield, Blade and Redman…) were not available, so I called Toine, Gautier and Serge ((Thys, Garrigue and Lazarevitch) and I must say that in the end, I do not regret that choice …

More seriously, and like for all my previous projects, this is primarily a story of encounters and “feeling”.

Today in Paris, where I have lived for almost 10 years, it is possible to meet many musicians and creating human and musical affinities and when concert opportunities arise or when creating a new project the choice is then natural…

This is what happened with Gautier, who arrived in Paris at about the same time and which moreover was also my neighbor (we therefore sometimes met to the local bakery).

For Toine who lives in Brussels, I think that our first exchange took place … on the web! (Specifically on the near defunct MySpace, Facebook ancestor somehow). Then I went to listen to his band when he was plying in Paris. We then started rehearsing informally and then I called him a few times as a “substitute” in my previous band…

For Serge, it’s a little different: I heard a lot of good by Gautier who had been his student at Perpignan, Toine had, I think, a little rubbed in Belgium, and I’d heard concerts in Lyon in the early 2000s, when I lived there.

But the first meeting with the trio really happened when we went to present our first album in a small festival in Montpellier. Serge living in the region, we offered him to join us to play a few songs at the end of the concert and he agreed. I kept a very good souvenir of this experience and then I naturally thought of him when creating a program guest.

Serge turned professional in the 70s, at a time when emerging Bill Frisell, Pat Metheny, John Scofied and when Keith Jarrett’s career exploded with artists such as Paul Motian, Charlie Haden …

For me it is in the late 90s, early 2000s, when Brad Mehldau, Mark Turner, Joshua Redman, Kurt Rosenwinkel began to be known in Europe.

For Toine, it is still different, (I do not know), it lies between Serge and I.

As for Gautier, the youngest of the four of us, he plays with some of the most gifted musicians of his generation but also with more experienced musicians, which probably contributes to his versatility and great knowledge of jazz in general.

The four of us represent different generations and complementarity of our courses and our personalities is one of the reasons why I think this formula works.

Again, probably a story of contrasts…
CJZ : For you, what is jazz today? Does this word make sense?

MM : This is a question which sometimes creates the debate within musicians playing this music.

In general, I think it is a music that is potentially quenches all styles, it’s mostly a state of mind and I want to associate it with these words : miscegenation, interpretation, freedom, improvisation, sharing, expression, spontaneity, commitment, sincerity …

CJZ : What question would you like the media to ask you, which they never thought ?

MM : I’d like them to ask me a question they never thought! (Curveball!;-))

If not: participate in a blindtest: it is a way to listen to music always surprising, which limits a priori and develops critical thinking and we (re) discover many pieces that we would not have had the idea to listen.