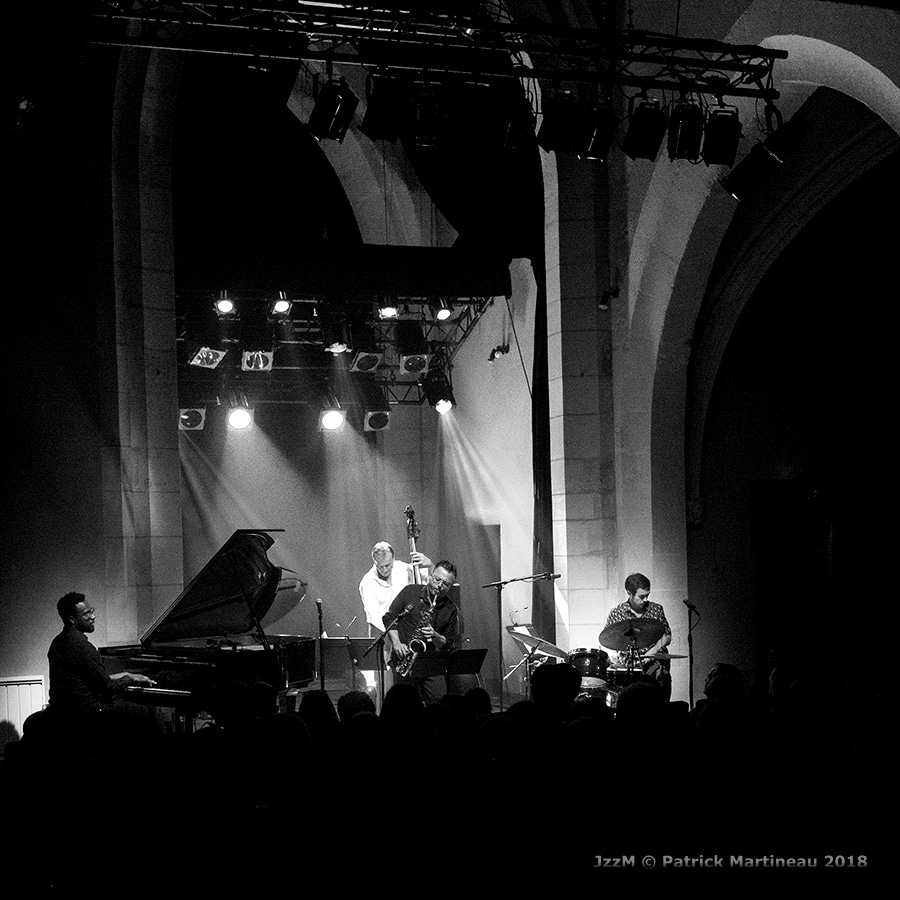 From June 8 to 17, 2018, was the Maisons-Laffitte Jazz Festival: a rich program of discoveries and headliners, the event was worth the trip.

Among all the concerts that have punctuated these nine days, some artists have particularly moved us and we wished here to put them in the spotlight.

It is in the confidential setting of the Old Church of Maisons-Laffitte that the festival offers us an evening dedicated to the young pianist Roberto Negro.

Rising star of the French Jazz scene, named at the last edition of the Victoires du Jazz, the musician unveils his solo piano project in the first part of the evening. With multiple accessories on the strings of his piano, the musician explores unusual sounds, beautifully highlighted by the finesse of his game The keyboard is transformed into a real small live orchestra, serving a musical journey of a rare modernity. Roberto Negro does not care about conventions and takes us into his musical universe. A unique, intimate and captivating universe.

The pianist is joined in the second half of the evening by the talented French violinist Théo Ceccaldi. At the crossroads of Baroque and Contemporary Jazz, the project Danse de Salon of the two musicians fascinates as much by its lyricism as by its virtuosity. The stage becomes the playground of the two accomplices who subtly mix the percussive sonorities of the piano with the phrasing of the violin. The communicative energy of the two musicians and the smiles exchanged leave no doubt about the pleasure of playing together. A bright duo, inspired (and inspiring) music …

The weather is cold at Maisons-Laffitte International Campsite. But hearts warm as the feet relax. We can certainly count on the catchy rhythms and good humor of Pedrito Martinez and his musicians to help us forget the weather.

Halfway between jazz-fusion and Latin-American music, the energy that emerges from the stage easily conquers the audience. This music surprises by its diversity, its dynamism. There are successively sophisticated keyboard solos, then powerful and deep bass lines and finally a technical demonstration of percussion. Pedrito Rodriguez and his constant sidekick Jhair Sala are constantly pushing the limits of rhythmic complexity to congas, bongos and the bell.

A rich night of flaming dances and blisters on the feet …

Every day is different in the Jazz festival in Maisons-Laffitte, but the virtuosity is always there, especially for this evening of headliners. Accompanied by Jérémie Arranger on the double bass, the monuments of gypsy music has nothing to prove and make this concert a musical as well as facetious show. Their long-standing friendship is reflected in their music and their interactions.

The key word of the evening could be “the exchange”. Exchange first, between the two guitarists. They use questions and answers and share the themes of the songs. Sometimes, they compete with imagination and speed and the musical discussion becomes duel. Then exchange with the public. After having played two pieces to warm up, Biréli becomes teasing, note for example the sudden appearance of Mozart’s 40th symphony in full improvisation or the transposition of Minor Swing in major!

The hall becomes the theater of total complicity between the musicians and the audience. We can only be delighted to have shared this moment!

Is he a bird ? Is he a plane? No! He’s flying much higher than that, he is Thomas de Pourquery. This UFO, saxophonist but also singer, uses his neat composition and all the energy of the Supersonic quintet to produce a unique show, between sweet ballads and abundant pieces, rich, at the limit of free jazz.

The sounds are airy and the atmospheres are sophisticated. Many recordings and samples are broadcast before the musicians start to play and participate in the immersion in this special and creative world.

No surprise if Thomas de Pourquery has twice been rewarded by a Victoire du Jazz. The Malesherbes room at Maisons-Laffitte is, in any case, fully convinced of his talent.

A sensual voice, an energetic showman and generous music: we could not have dreamed of a better outcome at Maisons-Laffitte Jazz Festival!

The baritone, the new darling of vocal jazz and Grégory Porter’s British counterpart, easily carries off his Soul universe. The pleasure he takes on stage is particularly communicative.

Hardly settled, the spectators find themselves arm-in-arm with their neighbors to sing together. In the audience, we dance, we clap our hands. The concert is really built on the interaction with the room. The musicians are not left out and the performance is not theirs, any more, any rest. Mr. Sanko even leads a group improvisation at the end of the concert. Moment of great intensity, a new – and one of the last – highlights of this colorful festival.

It’s the heart full of emotions and the head full of music that we say goodbye to Maisons-Laffitte Jazz Festival. Our sentence will only last a short time because we leave only to better meet … at the 2019 edition!

Thanks to the organizing teams,

Thanks to the artists,

Thank you to Maisons-Laffitte Jazz Festival!