South Florida Jazz Orchestra – The Music of Gary Lindsay: Are We Still Dreaming?

By Jean-Michel SCHLOSSER11 April 2020No Comments 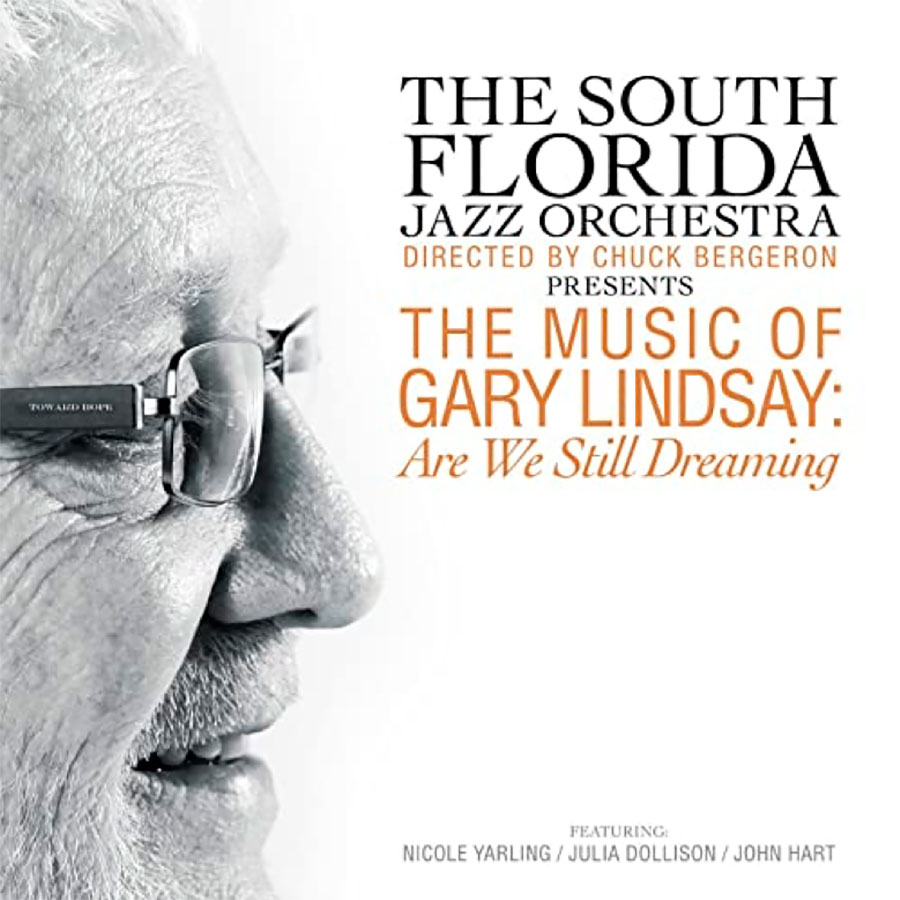 This big band is a very big machine, with very large music stands that have a certain number of instrument leaders . Bringing together studio musicians from Miami and the surrounding area, bass player Chuck Bergeron who is also the director of the orchestra invites us here with his personal bloat to listen to the arrangements of saxophonist Gary Lindsay who also composed and arranged for  Maynard Ferguson’s big band.

The band revisits on this occasion some memorable standards like the essential Round Midnight but also the Pat Metheny’s Better Days Ahead or the famous Billy Strayhorn’s UMMG.

Many musicians have already done their classes in Woody Herman, Buddy Rich and Maynard Ferguson’s bands without counting participations with Stan Getz, James Moody, Dave Grusin and even Frank Sinatra. Not only sidemen, some have even made a name for themselves as a leader, we think of Greg Gisbert, Alex Norris, Ed Calle and Jason Kush, not to mention the recording’s guest star, tenor Rick Margitza.

The performance here lives up to the overall harmony. We find an invariant of the leg of the big US bands: the placement is cut with a cord, the syncope cut with a guillotine and all in arrangements refined with the caliper. But this millimeter assembly should not suggest that the technique takes precedence over the rest. There is real freedom of expression which explodes in syncopated metaphors and the interventions of all the soloists are both calculated and intoxicating. Just listen to Toward Hope where Margitza excels to be convinced. The score descended, unexpected and surprising like Bullit in the streets of S.F. The music is not without reminding sometimes the themes of the black thrillers of US cinema of the 70s.

The Art of playing Standards

A bluesy side also in the theme Easy Leaving perfectly delivered by the singer Nicole Yarling enhanced in value by the epic solo of Gisbert on the trumpet, before the swing resumes its rhythm notched by the desks and the scat of the vocalist. A remarkable re-reading.

John Hart on guitar on Better Days Ahead plays spiders in the web handed to him by the brass desks and begins an intimate dialogue with the electric piano.

Between a sumptuous reinterpretation of Round Midnight padded in a heavy brass material in which the term big machine takes on its full meaning and a medical group from Manhattan treated with baritone and trumpet, we let ourselves be carried away by the fiery construction and the brilliant soloists’ interventions.

High quality interpretations served by an impeccable sound recording where each station is clearly distinguished make this album an absolute must in the genre and which revives the attraction for jazz in (very) great training, in all senses of the word. term.

A big band to discover absolutely by continuing on two other recordings, “South Florida Jazz Orchestra” released in 2008 and “Trumpet Summit” of 2012 with trumpeter Brian Lynch as an exceptional guest. Note that we are waiting for the release of the last one, which should be oriented around the compositions of Rick Margitza.