By Jean-Pierre ALENDA30 May 2022No Comments 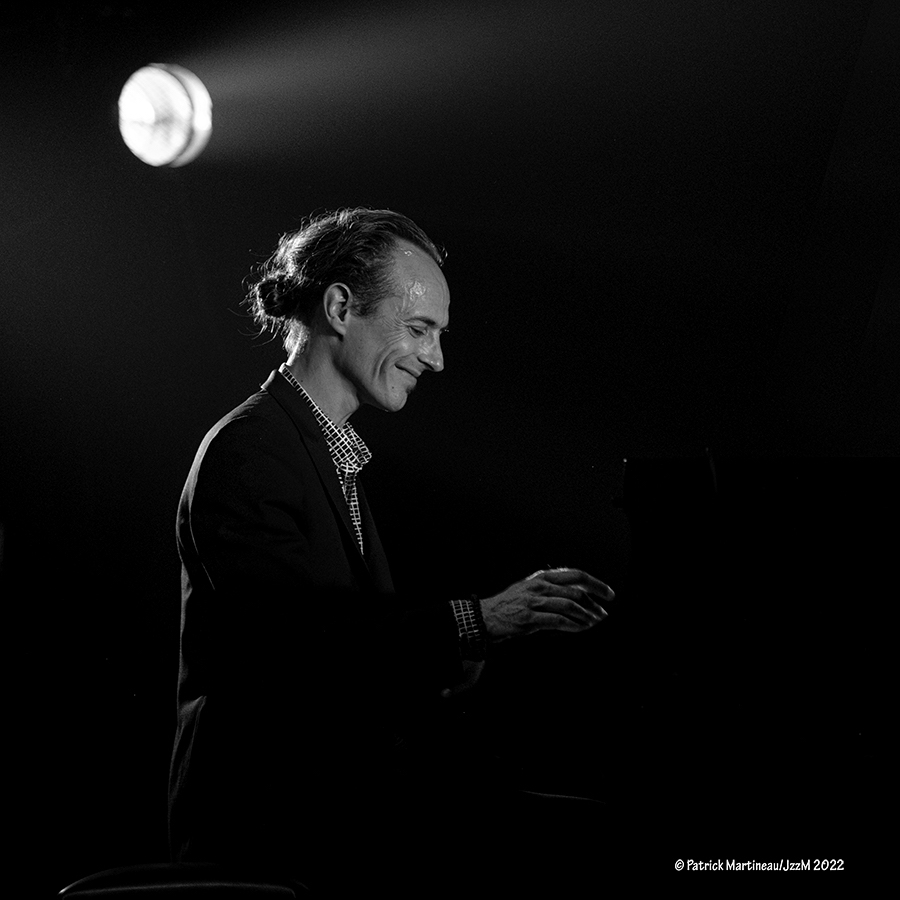 On May 21, 2022, at the Café de la Danse, pianist Rémi Toulon’s quintet gave a concert that symbolized the liberation of a period in which the works performed by the artists temporarily ceased to be landmarks, losing in their wake a little of what made them great.

For the release of “The Crave“, an album that follows “Adagiorinho”, a sort of cross over between European and Latin American music, Rémi Toulon and his side men continue their peregrinations in the heart of world music, mixing in a virtuoso way continental and pelagic influences.

After “Adagiorinho“, the formation crystallized around a new project which, contrary to the period hostile to displacements during which it was recorded, proposes a true imaginary red thread which goes from New York to Rio, while passing by New Orleans. Alternating trio, quartet or quintet, according to the inspiration, Rémi Toulon delivers a luminous and personal music, a universe at the same time mixed, rustling of life and spouting, although anchored in the best tradition of the jazz, the one of the crossbreeding of which it makes the apology by its very existence. In a context shaken by the pandemic, the party is nevertheless tinged with a certain gravity, and melancholy competes with joy and poetry, as on most of the tracks of the album “The Crave”. 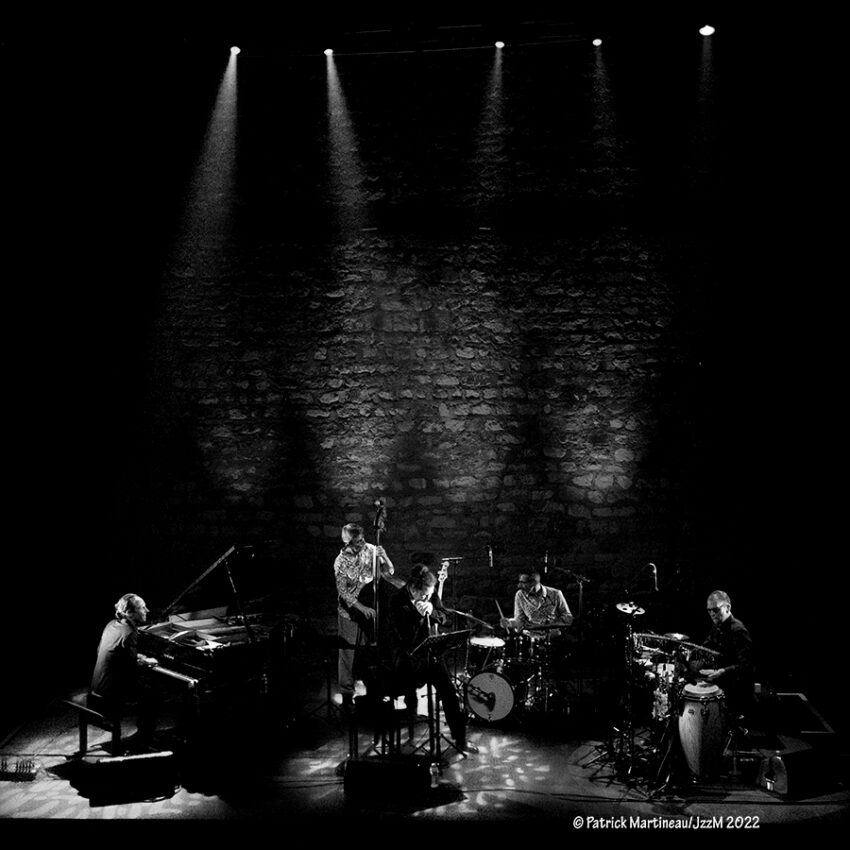 Since 2017, Rémi Toulon has been playing with Sébastien Charlier and Zé Luis Nascimento, the percussionist from Salvador De Bahia, whose virtuosity constitutes the nuclear core of an atypical quintet at the border between Jazz and World Music, as formations like Sixun had tried to initiate the approach. With Inor Sotolongo tonight on percussion, and well supported by Sébastien Charlier on diatonic harmonica, a true harmonic counterpoint to the piano, the quintet develops a vocabulary of impressive richness of expression, which allows it to integrate many aesthetic styles into its register, from jazz to pop music, through fusion.

In first part of this concert, Cyril Cianciolo (guitar, vocals) and Jérôme Peyrelevade (harmonica, vocals) with titles taken from their cd “Kiffosaurus Rex“, enter the stage for a very successful folk tribute to Nelson Mandela (Madiba). The duet was undoubtedly chosen for its very world music tonality, so much the vocal harmonies of the two companions, morning of blues, make the beautiful part to a diatonic harmonica of the most beautiful effect.

After this beautiful introduction, Rémi Toulon‘s combo plunges us into the opening conditions of the album “The Crave” with “Arabesque” and “Choé’s Dreams“, which evoke Brazil and the Caribbean, with syncopations, complex harmonies, accentuation of the weak beats, lyricism, and a generosity which will be the cardinal point of the whole evening. 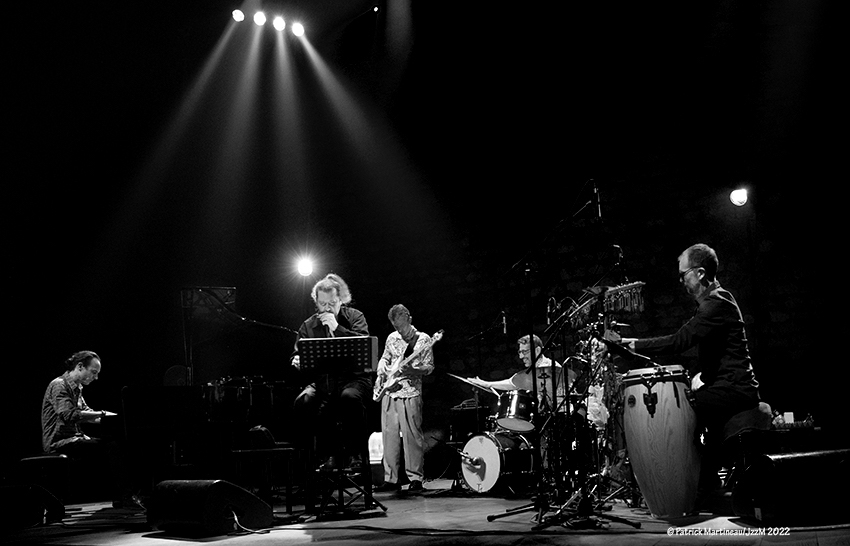 « When You’re smiling »,The Last Parade“, inspired by the solemnity of the funeral of Dr. John, a pianist and singer from New Orleans who died in 2019 and is a worthy emulator of Fats Domino, literally makes us initiates linked by elective affinities during a ceremonial ritual.

“The Crave” evokes the life and work of Jerry Roll Morton, of whom Rémi Toulon reminds us that he was considered one of the inventors of jazz, although he is above all the author of a proto jazz that combines ragtime and blues in a clever muddle that great tutelary figures such as Earl Hines and Louis Armstrong will be able to put to good use.

A new borrowing from Brazilian music, for a piece of very classical inspiration reminiscent of the collaboration between the guitarist Toquinho and Vinicius De Moraes, after which “Un Poco Loco” pays a tribute to Bud Powell, who, like Dizzie Gilespie, did not hesitate to explore the Afro-Cuban vein. Rémi Toulon restores the particular atmosphere of this title with a verve and a mastery which force the admiration, when one knows the difficulty of this piece and the talent out of standards of the great pianist, whose aura and fame are those of the greatest musicians of jazz. Rémi Toulon‘s solos seem to spring from the rhythmic framework, never far from the chorus in plated chords without ever falling into it, and the notes in a string resound, just as they would in a larger venue than the Café de la Danse.

Surprise, as on the studio record, the group covers Michael Jackson’s “Human Nature” tonight, a choice that will undoubtedly not delight jazz purists, but which highlights the excellence of the melody developed by Steve Porcaro and produced by Quincy Jones (Rémi Toulon facetiously announces that it comes from the pen of Paul McCartney). It is here the rhythm section of Vincent Frade and Jean-Luc Arramy which brings the subtle nuances of the experiments made in contact with musics going out of the hot jazz framework which makes the difference, by magnifying the melody of a piece that everyone believes to have already heard.

With “Elegy For An Eternal Child“, we enter the most sensitive part of the concert, called to remain in all the memories with this tribute to Chick Corea, vibrant, powerful and bewitching; a master piece that palpitates in the air, river element in which everyone finds matter to immerse himself, crossed by flashes of improvisation and absolutely magnificent exchanges.

“Confinamento Feliz” is, of course, a reminder of the pandemic we have just gone through, but one would look in vain for absolute spleen or despair in this title, a superb meditation on the tragic dimension of existence as well as on its beauties, in the prolongation of an interlude in trio formation which evokes French contemporary music.

The generosity of the musicians makes it impossible to see these two hours pass, and the atmosphere is progressively charged with emotion, with exemplary solo parts that never compromise the harmony of the whole, a sense of the collective that is the keystone of a quintet in a state of grace in the last third of its performance.

The question of the porosity of jazz with respect to influences outside the Afro-American base will probably never be settled, even if the population movements observed during the key periods of its history constitute more than an embryo of a possible answer. But we can state without ambiguity that what we find in New Orleans, as in Brazil or Cuba, is a musical culture that comes from the street, whereas the European tradition is marked by the dynamism of salons and dedicated festivals. 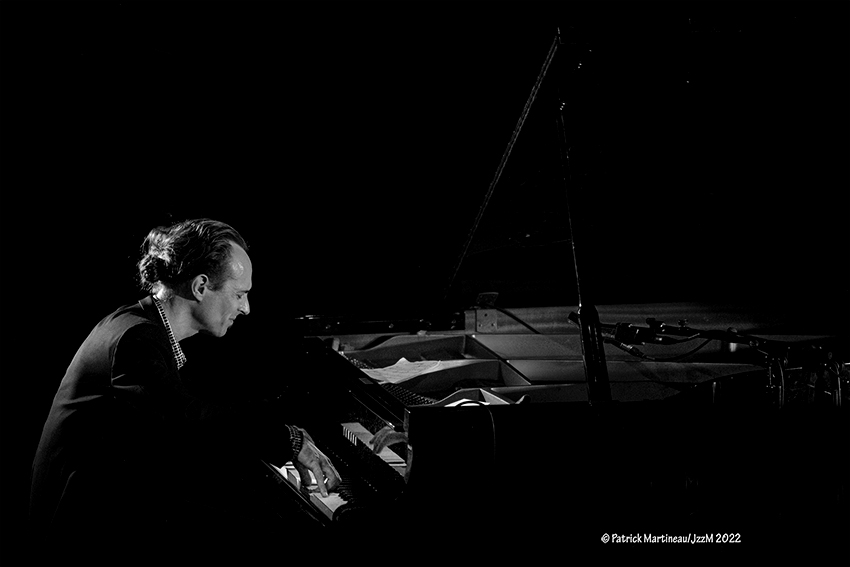 It is on these contrasting breaks that the explorations of the musicians of Rémi Toulon‘s quintet are born. They should be thanked for what they gave to their audience, in an atmosphere of tropical furnace quite appropriate to their purpose.