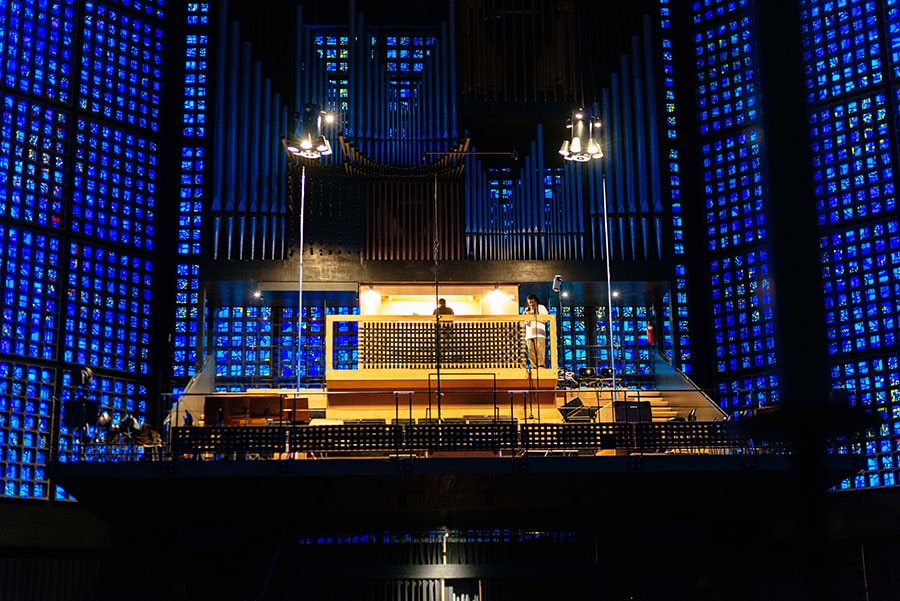 The last day of the 53rd edition of the JazzFest Berlin, and after the journey one large dish is served on a sunny Sunday afternoon: the Karl Wilhelm Gedächnis Kirche hosts an interesting dialogue between organ and trumpet. Alexander Hawkins and Wadada Leo Smith present in this solemn environment their ‘Blue Meditation’ piece. As only a warning, the director of the festival Richard Williams, quotes Wadada, stating this is going to be “music with the breath of life”.

Light is blue. Shining, powerful and bright blue. Cerulean, turquoise, cyan. It penetrates the millions of small square glasses that cover the walls of the Memorial. It comes into the big hall and illuminates the floating dust. Traveling until it hits a reflecting surface.

The most solemn journey, as it dies, hitting the big, golden sculpture of Christ that hangs. Flying, towards at the front of the church, right on the altar, flying right on the big golden cross.

Eyes look around. People sit on the floor. On the steps. They turn around on their chairs.

Floating on the entrance door the organ lies, majestic and powerful. Camouflaged. White focuses bring light to the keyboard. A white light that ends up, again, bumping into the golden Christ statue, right on the opposite side of the building. Facing it.

Facing it like the chairs do. Set up oriented to the altar, as if this was meant to be the main character.

But it is not.

Long, grave, profound notes are born from the organ tubes. They resonate on the walls and vibrate and reverberate and fill every inch of the space. A black silhouette moves in front of the keyboard, still softly. A white dressed figure stands on the corner, to its right. Close enough, but keeping its own space, creating its own corner. A microphone climbs up, right in front of the white figure, not directed to it but rather trying to reach higher, as in an attempt to capture everything.

As in an attempt to capture “every breath of it”.

The air that allows existence. The music that describes the legend of life.

Alex picks from the organ the notes that Wadada spits from his trumpet into the universe; they talk, they write, they cry and laugh and scream and moan and travel together. “It’s a journey” Wadada smiles, “there has to be space for listening as much as for hearing”.

His eyes closed. His trumpet pointing the floor. Mute on. Kicks off with slow high notes, carries them, stretches them, launches them into the sky. Bent knees, hair falling forward.

The lights illuminates the Christ statue and the Cross, while the trumpet screams louder and louder. The organ echoes her. Transports her yelling.

She is golden. The trumpet is just as golden as the Christ and the Cross.

But nobody can see it. All the chairs facing the altar but nobody pays attention to it. Eyes closed, inexpressive faces. Hearts and minds travelling. Nobody looks at Christ, even if all the cores are facing the golden Cross.

Alexander Hawkin’s fingers improvise a ditty. High notes drawing a pattern and start a trip. A growing journey. Wadada awaits. Allows the crescendo. “Silence is as important as sound”. Alexander moves increasingly. He climbs, creates and builds, speeding up. Hard to follow.

The Organ smashes again, starting off with something that sounds like a bird’s conversation. Grave lows on a base and tall, strong, bitter highs on top. Telling a story.

And suddenly a deep, piercing, dangerous, trumpet perforates the sky. No muting, the purest notes that last three seconds each before they die again, bouncing in the shape of an uprising. Fast highs, fast bass, all quick. Short silences created by the struggle of the notes when getting out of the trumpet.

“I make art and I am not surprised by anything any more. When you live in the present and experience something, if you are fully committed to that experience you do not have time for a reaction. And surprise is a reaction”.

Wadada plays in exposure. Naked. Such as Alexander with his winding and robotic and almost neurotic moves. Fully committed. Letting it all out.

They are back to the conversation. Progressively increasing the volume. Explosive. Strident, blinding highs. Wadada picks Alexander’s last note and repeats it and plays with it. He no longer plays curved forward, but rather completely upright, curving backwards, pointing at the sky with his trumpet, core towards the altar, and his golden instrument yelling aggressively, in crescendo. Magnificently introducing and removing the mute.

The right amount of everything.

The discourse of beyond.

Unexpected, hard to handle, confusing. Listeners do not know how to deal with it. A shy applause begins. Soon the whole memorial reverberates in gratitude.

A strange feeling in the souls. Mystic and epic and disgusting and incomparable and terrifying and defying.

“A living experience of art”, Waddada holds the microphone while Alexander smiles, in goodbye. “A performance is a non-verbal piece of art.”