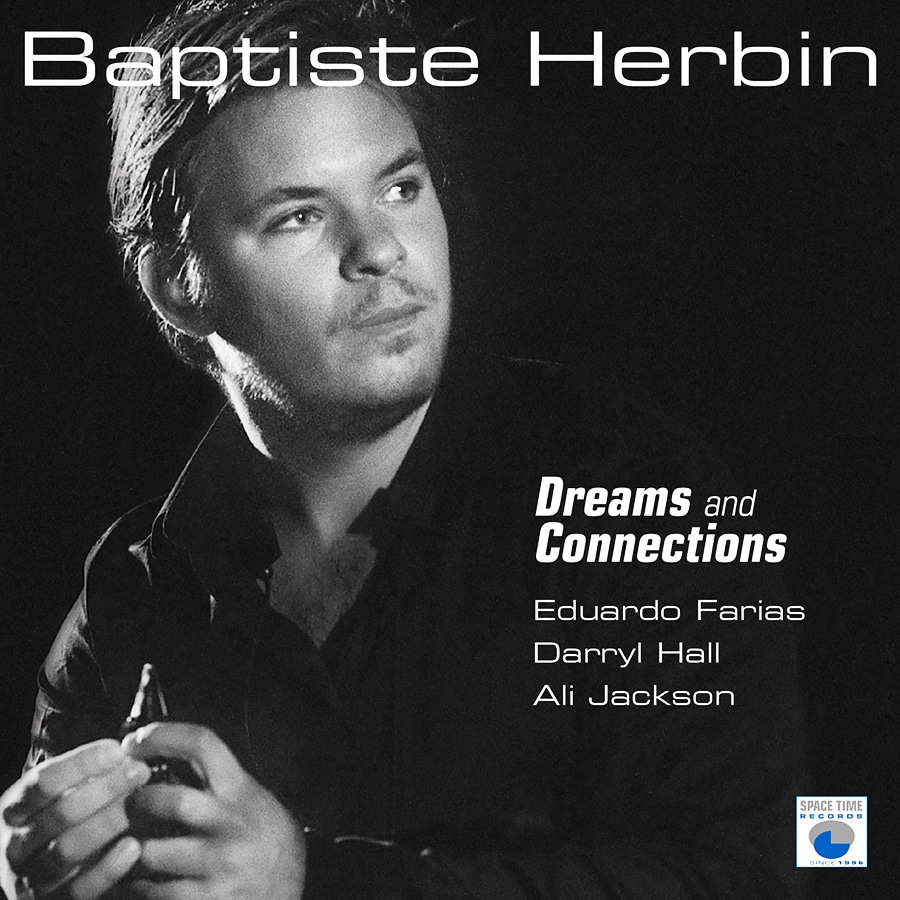 The talented and fiery traveler saxophonist comes back with in his wallet, a third album “Dreams and Connections” even more advanced than the two previous ones that had already convinced a unanimous criticism.

I never bet. Neither on the most beautiful conquest of the man (the equine obviously …) nor in the slot machines and other machines to pluck the pigeon. But I put all my attention and my hopes on jazz artists: Baptiste Herbin is obviously part of it and is placed, no doubt possible, on my podium.

« Dreams and connections » was not yet in all the racks, I was already dreaming to connect to his next album. What will it be?

But let’s go back to this last album in quartet. At his side at the piano, also a promising Cariocas artist, Edouardo Farias, with a subtle and delicate game that knows how to be tonic and virtuoso. Then a rhythm section which we have not finished hearing about: Darryl Hall on bass, known to the Parisian public for his performances with Laurent de Wilde, and Ali Jackson on drums who became known with Winton Marsalis, James Carter, Joshua Redman …

As it is agreed to say nowadays:  that’s when things get heavy!

With such a lineup, we suspect that the “dream team” has the means to bring us in its dreams. So good!

The arrangements are all signed by Baptiste Herbin, and most of the compositions are also, except of course the traditional Brazilian music that is adorned here, with new and elegant colors!

Baptiste Herbin, who has a real desire to discover, to learn, to play even better, wanted to pay tribute to his masters. The album opens with a vigorous “For Julian” dedicated to his first master, Cannonball Adderley. After the intro on the saxophone, Eduardo Farias‘ sentences, punctuated by Darryl Hall‘s bass and Ali Jackson‘s drums, are heard, then the dialogue resumes between the four protagonists. The bar is already high before the second song composed by Baptiste and which bears the title of the album does not begin. “Dreams and Connections”, funny name that Baptiste Herbin explains, “it is a tribute to the life of a musician who dreams of playing with big guys and establishes relationships through his meetings” So everything becomes clear.

I bet on this tune: « Dreams and Connections » because I think that it will become a Hitun a Jazz standard! unless it is « Sphère » moving tribute to Thelonious Monk ? or « Mister X » dedicated to Xavier Felgeyrolles, de Space Time Records, producer of the album.

Creations that demonstrate if it was needed, the leader qualities as composer.

As for the colors coming from Brazil, they clearly show Baptiste Herbin’s dedication to the musical culture of this country and his openness to all the musics of the world, with “Confusão Geral“, for instance.

Then finally comes “Um a Zero” which closes the album, a breathtaking demonstration of virtuosity and mastery. While listening to it the other night, I imagined the “big” Pelé crossing Maracanã’s ground with the bal…

Talent time four, melodies chiselled to perfection, a strong personality, what more to convince you to buy this album and come and have it signed, during a live?

No need to knock you out dear Couleurs Jazz listeners and readers, with more tirades on the quality of this album, you have understood that we love it without reserve and we wish that you will share our enthusiasm.

So, I propose you to judge immediately for yourself: