By Christian Grimauld6 February 2017No Comments 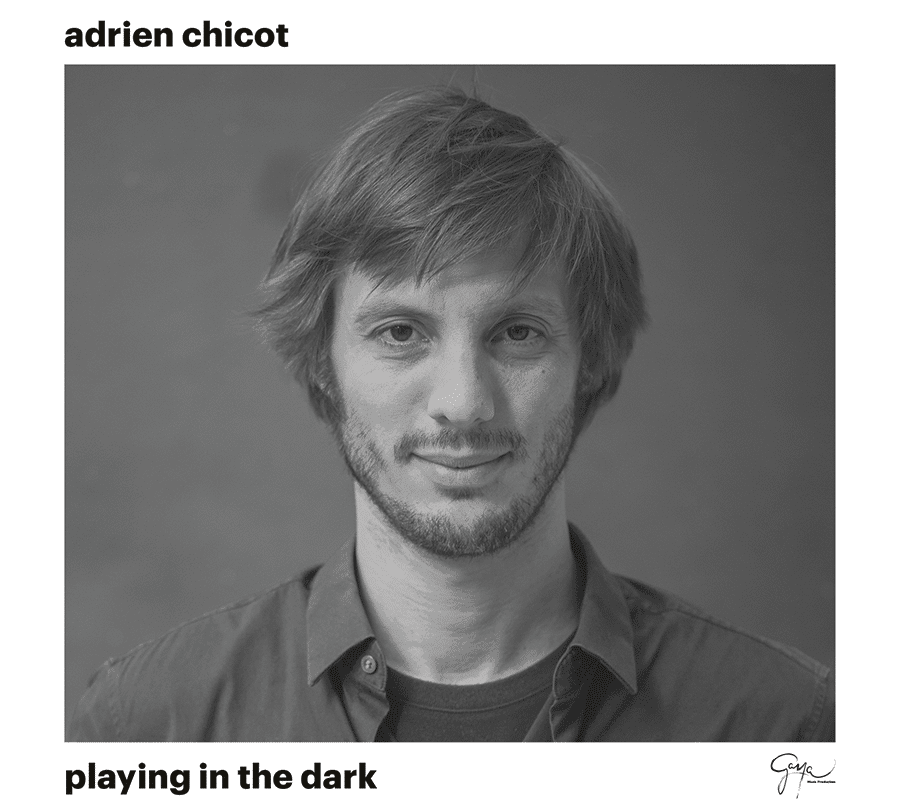 After a debut album entitled “All In“, Adrien Chicot comes back with an enthusiastic second album “Playing in the Dark“, realized with the same rhythmic: Sylvain Romano on bass and Jean-Pierre Arnaud on drums, two accomplices with whom a perfect complicity is obvious.

We loved the emotion that this spontaneous and inspired music releases and we asked him to tell us more :

Couleurs Jazz- What motivated you to create this project “Playing in the dark”? Why ? And already this title ?(while the album is not so…)

Adrien Chicot : “Having recorded my first album “All in” released in 2014 with Sylvain Romano on double bass and Jean-Pierre Arnaud on drums, I wanted to renew the experience with them. For this first record we had not repeated and it is true that I was pleasantly surprised by the spontaneity that came out. The evidence was there, which is why I wanted to keep this spontaneity for “Playing in the Dark“, and even try to develop it. So the idea was to write fairly simple and melodic pieces that keep a certain freshness as immediate as possible. I really wanted each of us to express freely his personality.

The titles I give to my songs do not necessarily have a deep meaning, but are rather linked to everyday anecdotes of our lives. In this case, the title “Playing in the dark” has nothing to do with the fact that I am depressed or that misfortune strikes at me or on some obscure side of my personality. In fact it just comes from the fact that in winter, when I work my piano and the night falls in the late afternoon, too absorbed by music I absolutely do not realize it, and I do forget to turn on the light and find myself playing in the dark for hours …”

CJZ- What would you like the audience to retain from this music? What affects you in general and there in particular?

AC – For me, the most important thing in music is sincerity, you have to be honest with yourself and with others and I feel that the audience is receptive to that, at least I hope. I realize that the musicians I am most sensitive to are those who play as they are and who do not try to play a role. I feel that the integrity of a music is understood, and that it testifies to the truth of the musician who plays it. It is also for me to play with accuracy.

CJZ- What do you think of the current jazz, the music in general, its diffusion?

AC- I do not really manage to put jazz in all the boxes that are lent to it, including this famous today jazz. I really appreciate today jazz forms, but there are also fashions that do not seduce me. When an aesthetic becomes automatic, I feel that jazz and even music in general, lose their infinite nuances, and I am not very comfortable with that. For me a musician personality gives the identity of his music, and not the reverse.

Today we are lucky to be able to listen to even more music than before, especially thanks to its internet diffusion … Of course it’s sad for the record industry, even if we still record, and that they are bought. But the discovery is done rather by the Internet, we really have the possibility to listen to everything.

CJZ- Can you tell us about about your musicians on this album, Sylvain Romano and Jean-Pierre Arnaud ?

AC- In fact, it’s been several years that we played together in different bands, with Sylvain in Samy Thiébault’s band, and in Julien Alour’s one with Jean-Pierre and Sylvain. What I like plying with them is, as I said above, their spontaneity, but also their sound and their sensitivity to the environment. They make music lively and imperfect. Jean-Pierre has a feverish game, always on the lookout. Sylvain has a very powerful sound, very marked. The interaction with them is easy, even obvious. They are very attentive.

CJZ- Other musicians that you would like to say a word?

AC- There is a pianist whom I love: Yonathan Avishai precisely for his simplicity and honesty. The atmosphere of his music speaks to me.

“Playing in the Dark” is a Gaya Music album