By Eliz Corbett5 March 2019No Comments

The Gloaming (noun): the part of the day after the sun has gone down and before the sky is completely dark (Source: dictionary.cambridge.org/)

Let’s get one thing straight: The Gloaming is not jazz. The Gloaming (example: ‘Doctor O’Neill’ on YouTube) is just a step away from Gretchen Parlato and Dayna Stephens ‘ bold take on Wayne Shorter’s ‘Juju’ yet that is classified as jazz. So where do we draw the line? Where do youdraw the line? Is it the absence of drums, bass and horns that make it not sound like jazz as we know it?

Let’s just say that, like many contemporary ‘jazz’ groups, The Gloaming refuses to belong to a category, transcending classification. It is what it is. Which is quite simply beautiful. The group describes its calling as carving “new paths connecting the rich Irish folk tradition and the New York contemporary music scene.”

I had the privilege of seeing the quintet perform live at the Athénée-Louis Jouvet theatre in Paris on 27 February. They were celebrating the release of their third album – The Gloaming 3– at the invitation of the Irish Cultural Centre in Paris, which is basically an arm of Culture Ireland, the Irish government’s agency for promoting Irish culture worldwide. Ireland knows how to treat its prodigal sons: the group’s 7 dates in Dublin are sold out, as is their gig at Carnegie Hall in NYC in April. 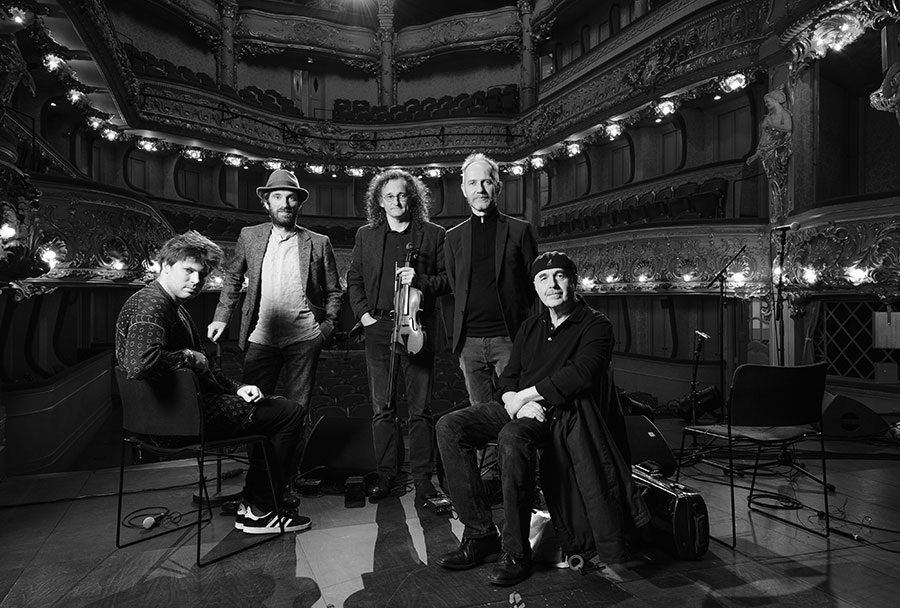 The Gloaming is also comparable to jazz in other ways. First, it takes a strong musical tradition and shakes it up. Just as a jazz musician has to know the chord progressions by heart in order to construct a meaningful solo, these musicians’ deep knowledge and intimate understanding of the tradition is what allows them to experiment with it, push its boundaries and toy with its codes. Four out of five of the musicians come from traditional Irish music,  “a tradition strong enough to be played with and enriched.”The ‘odd man out’, pianist Thomas Bartlett from New York, helps blur the genre lines further becausehe doesn’t know the tradition. He comes from the NY contemporary music scene. This music is truly ‘genre-fluid’. The emotions it carries are universal and visceral.

Secondly, The Gloaming is largely improvisation-based and the lyrics often come from poetry. There is the melodic theme, then the solos, then a reprise of the theme at the end. The solo improvisations bounce off the springboard of the melodic theme and go to places way beyond the familiar, in a fresh way each time. The Gloaming’s ‘rythym section’ is the piano and the guitar. But master fiddler and band leader Martin Hayes’ tapping feet sound very much like a bodran, the traditional Irish drum. They get the pulse going, often building fervently to a jubilant climax. The solos depend on the collective energy happening on stage and between audience and stage, the invisible forces of human energy. One man in the Paris audience just had to stand up and move and cry out during the last number, he couldn’t contain himself.

The musicians themselves are almost constantly moving, swaying, bending and rocking, especially during their solos. (Sound familiar, jazz fans?) They are so brilliantly focused that they seem to be in a sort of trance, channeling sounds and poems from the great beyond. We in the audience are the privileged witnesses of the exquisite paradox that takes place when musicans with total mastery and control of their instrument let go and become possessed by a force beyond their control, communicating with each other within that trance. The improvisational tugging that happens between Ó Raghallaigh and Bartlett on opposite sides of the stage creates a magnetic field that is as palpable as it is hypnotizing.

Thirdly, the primal purpose of traditional Irish music was to give voice to an oppressed people. As if to say, ‘you can take away our language, you can take away our freedom, but you can’t take away our music’. If you know anything about the roots of blues and jazz, this will sound very familiar to you. The necessity of the music is what gives it its drive and its strength. This music is not the result of a royal whim or a bit of light entertainment for a privileged elite. It is a collective outcry, a fundamental urge to express the pain of living and the joy of living. At once cathartic and uplifting. The Gloaming holds a torch to that primal urge to sing the blues andtakes the liberty to break the habits, bend the rules (and the notes!), and create anew. The result is poignant, progressive and timeless.

As Quincy Jones says, forget about all the different categories of music; at the end of the day it boils down to just two kinds: Good music and bad music. The Gloaming clearly belongs to the former.

“The Gloaming is a wonderful mix of soulful and passionate talents who have created their own genre.”