By Bruno PFEIFFER5 July 2022No Comments

Abbey Lincoln’s talent shines through in the reissues of the legendary CANDID label (already reappeared on Barnaby, in the 70’s), this time graced with a remarkable remastering.

Visceral impulse of the recordings Straight Ahead and We Insist! (1961): the struggle for Black civil rights in the United States. The drummer Max Roach took it into his own hands. Sit-ins had been multiplying in the USA since 1960, at first spontaneous, then taken up by Martin Luther King.  The most apolitical musicians of the time (Count Basie, Duke Ellington, Art Blakey), declared their support. Max Roach brandished the banner.

On We Insist! supervised by the eminent musical critic Nat Hentoff, the fine flower of the blowers sends the best. We certainly enjoy the choruses of Coleman Hawkins, Eric Dolphy and Booker Little. But above all, the session brings Abbey Lincoln, then young wife of Max Roach, to the top. The performance of the actress in sight reflects on the whole. Max Roach and Oscar Brown Jr. (lyrics) compose all the tracks. The lyrics denounce slavery, describe the ongoing liberation in Africa and the United States, and give impetus. The listener melts as he listens to Abbey’s compelling, emotional stanzas. A cult album, We Insist! reveals a stature. 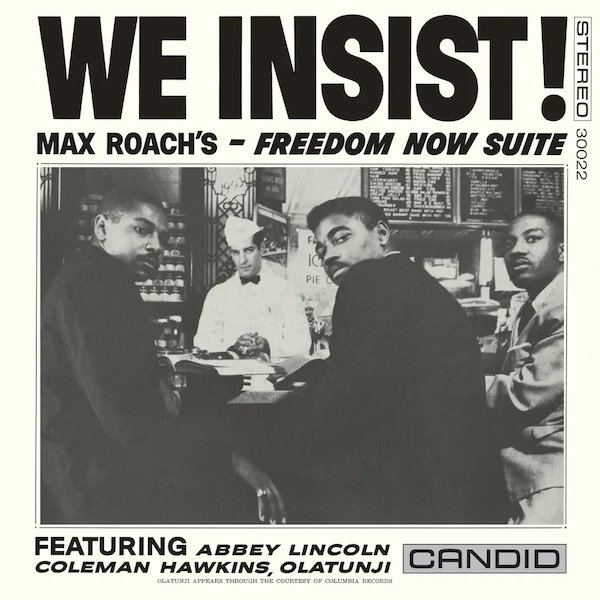 Throughout the second record, Straight Ahead, the American becomes more involved in the songs. She gains in strength, rebellion… and consecration. Abbey wrote the lyrics for Blue Monk. What more can I say? Except that Thelonius Monk, present at the sessions of the album, listens, appreciates the performance, gives his blessing. The pianist praises Abbey (“I Like the Way You Stand“), for Abbey’s Blue Monk, now a classic. Three haunting tunes finish the spell: Left Alone (written by Billie Holiday), African Lady (a poem by Langston Hughes) and Retribution (lyrics by Abbey). Abbey transports us with every phrase, and the musicians with every performance: Coleman Hawkins (tenor sax, what a master!), Eric Dolphy, (alto sax & bass clarinet), Julian Priester (trombone), Art Davis (double bass), Walter Benton (tenor sax) and Booker Little (trumpet) 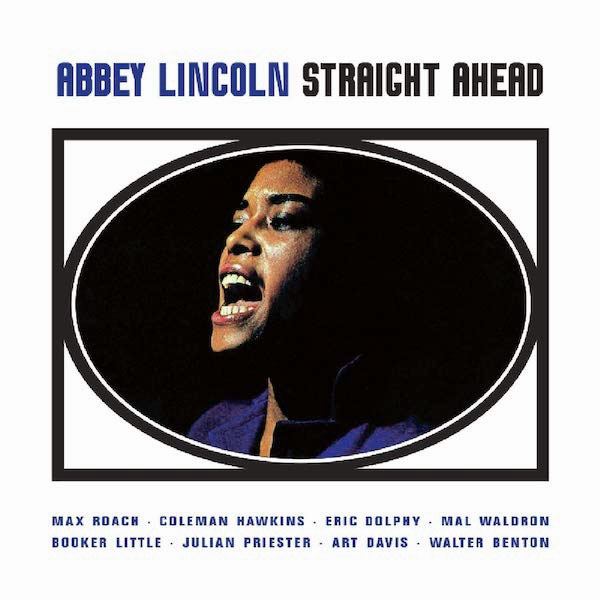 Candid remastered in the Charles Mingus presents Charles Mingus batch. By all accounts one of Mingus‘ greatest records. Four tracks from a vintage quartet! Ted Curson (trumpet), Eric Dolphy (alto sax & bass clarinet), and the faithful Dannie Richmond (drums) accompany the boss, all on edge, vibrant in their most personal expression.

The session at New York’s Nola Studios, taut as a drumhead, dates from 1960, also supervised by critic Nat Hentoff. The session is to be listed among the most important recordings of the second half of the twentieth century. Mingus blasts away at everything, puts the musicians under tension, catapults the bewildering choruses of his fellow musicians, and sets the place on fire. Hentoff mentions the version of the Original Faubus Fables in the liner notes. In it, Mingus mocked Arkansas Governor Eugene Faubus, a supporter of racial segregation in the 1950s and 1960s. For Hentoff, Mingus’s words sound much less assertive on the CD than they do in public. One thinks: what must it have been like in a club… 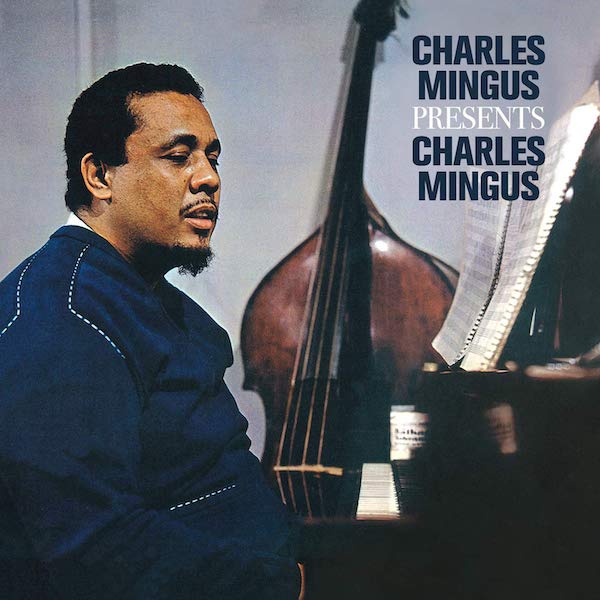 Last remastering of Candid, in blues category. Release less known (unfairly) than the three previous ones. The first album of a piano giant. Listen to Otis Spann is the Blues, associated with the guitarist Robert Lockwood Junior. A superior vintage. Otis Spann was born in 1930 in Mississippi. He went up to Chicago, in the great period of the electric blues. Everybody was after him, from Buddy Guy to Muddy Waters. He toured in Europe. Disappeared at forty years old. There is no more natural, more poignant, more soulful, more virtuoso incarnation of the blues on the piano. And what a sound! 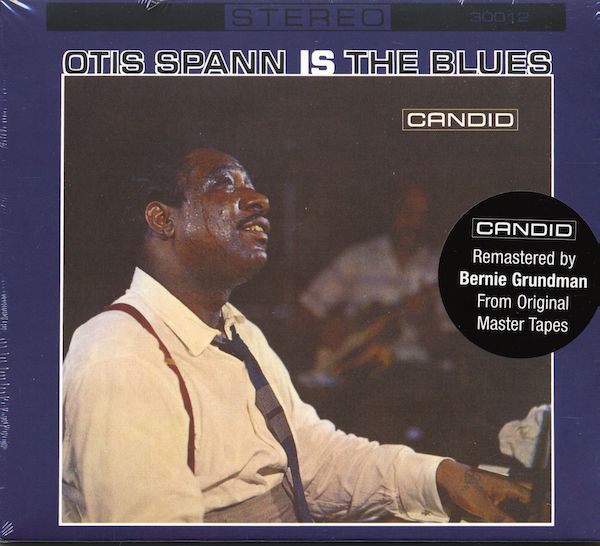 Sam Hopkins, known by the nickname Lightnin’ Hopkins was born on March 15, 1912 in Centerville, the county seat of Leon County, Texas. The bluesman is known as a deep, dark-voiced singer and a flamboyant guitarist. Fans identify the famous Texas style with his incisive phrases, “lightning bolts”, unusual statements for an acoustic guitarist, to say the least. But above all, what a storyteller! The favorite role of the Texan who does not deprive the listener of “Lightnin’ in New York”.
The album’s producer, Nat Hentoff, knows all about it: Hopkins only felt comfortable at home, in Houston bars, or even on the street panhandling. So, when Hentoff invited the artist in 1960 for sessions in New York, he organized appearances in clubs, on TV (CBS), and even at Carnegie Hall… Here is the artist reassembled. We are entitled to a Hopkins Lightnin’ pure sugar. You can taste it!

With a real bonus: he sits on the piano several times. There, enormous surprise: the gentleman, who pianos by keeping the guitar on the thighs (while singing!), is in his business. Lightnin’ died in 1982, in Houston. The undisputed specialist Mack McCormick wrote in substance this: when Lightnin’ went on stage, the blues was incarnated in his image. 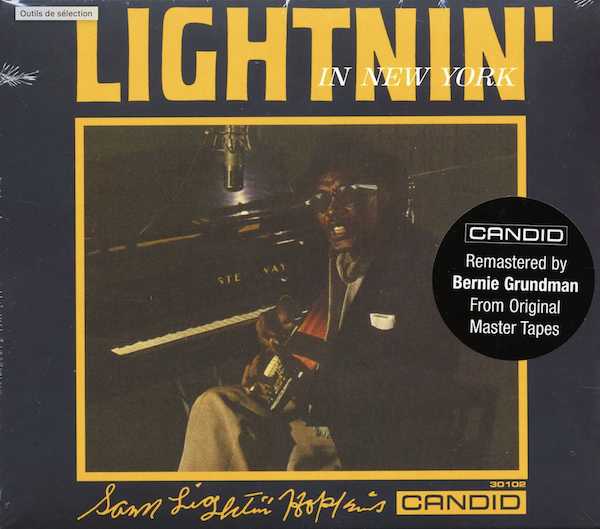