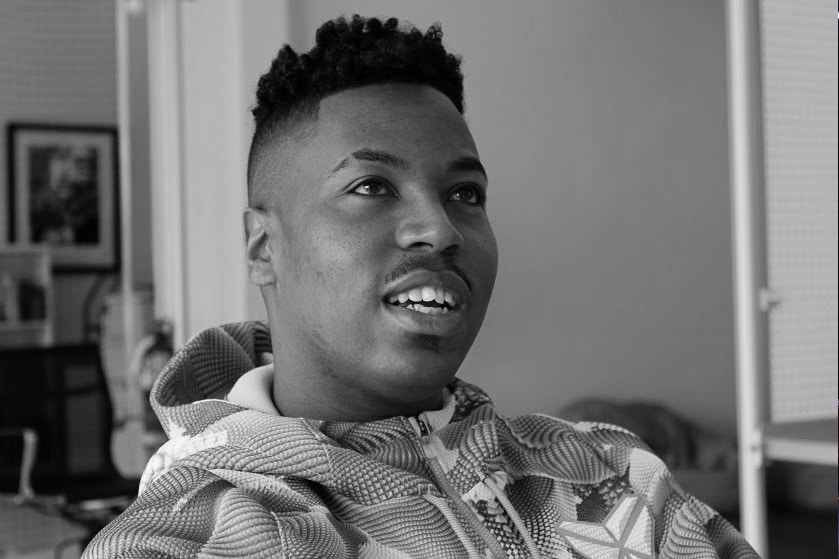 Trumpet virtuoso Christian Scott aTunde Adjuah returned this year to the Montreal Jazz Festival with a brand new sextet, blessed with the fresh air of all his young musicians. For three consecutive nights this 33-year-old New Orleans-born musician filled the Gesù with high-quality music – and energy. Thursday was for his sextet, but on Friday and Saturday Scott aTunde Adjuah shared stage with Charlie Hunter and Lizz Wright, respectively.  Three shows that he used to present his latest project: Stretch Music

“With a vocabulary not learned in any way you can point at, someone can say four words and break your heart”

Whispers, someone screaming at the back of the room. All eyes on the stage.

“When certain people play, I feel as if they are tapped into a source that most people never get to, but it is not external, it is internal.”

“The players that have the most captivating, pointed, original and unique sounds are the ones that irradiate it, in one way or another. It is always something that comes from your core.”

And then, the pianist caresses the keys, the bass dances with its huge wooden instrument, drummer hits the toms, unexpected whistle coming out of the flute, a whispered cutting sound hitting the microphone straight from the trumpet.

It’s music. And it comes straight from their cores.

Christian Scott aTunde Adjuah’s journey throughout the world jazz scene does nothing but grow. What started off as a family present during his childhood turned into Katrina, a custom-built trumpet whose bell points to the sky and whose power –and name– remind of the devastating hurricane that razed the Eastern coast of the United States and especially New Orleans (Scott aTunde Adjuah’s hometown) back in 2005.

But however dramatic Katrina was, it just emphasized the difficulties a society that was, in itself, hard and conflictive enough. Raised in a land of challenges and hurt, Christian Scott aTunde Adjuah says he makes music for love. “I grew up in a very hard environment. A lot of people died, a lot. But music had the ability to help get passed it, even if it was for a moment. And to see how sound made people light up and could give bliss and work as a healing… To me there is nothing more beautiful than that. That’s why I make music, honestly”

Love. The same love put into the creation of the music, the same love put into the practicing, the same love that can almost be touched when he is on stage. At Gesù, with the lights pointing at him, bouncing on the metal of his trumpet, he bends his knees and bows down to the microphone, looking at it as if in some kind of seduction game. The instrument moans, screams, whispers. He frowns, slightly inclines his head, covers the grill of the microphone with his trumpet. He moves in spirals, he stands slightly side facing. Humps his back and closes his eyes.

Metal silence and he looks at the band. Still and always with that love in his eyes.

He stays in the middle of the room and smiles. Opens his mouth, shows his teeth to the air as if about to bite something. Shouts. Gives orders? And places his eyes on Samora Pinderhughes, caressing the piano. On his sister Elena Pinderhughes, breaking standards with the flute. On Kris Funn, tickling the bass. On Braxton Cook kissing the saxophone. On Corey Fonville making the drums sound like heaven.

“When I look at each musician in this band, when I see the younger ones especially, it makes me… [pause]. I light up because I realise that they have a particular way of communicating – that they’re all willing to be vulnerable in front of the audience, which is not usual. That’s a type of love too. It’s a refined and adult love that’s based on trying to get somewhere together and knows that no matter how hard what you have to traverse is, they have got your back. Some people just have your back.  And not everybody does.

A pure trust that, when on stage, infuses the band, the music, becomes the essence of the performance. The members of the band turn the show around and push it to the audience, willing to give them something they can walk away with, something that enlightens them and touches their bodies, whilst the members of the band work together to grow, but having fun. Always having fun.

“It’s a journey” says 21-year old flautist Elena Pinderhughes. “Let’s say you have a 90 minute set: you’re showing a lot of emotions. You are showing strength, sensitivity… If you’re feeling a certain way you will play a little differently, and that’s part of the beauty of it. And you might not be saying anything but the band will be like ‘oh she’s feeling that way tonight’, so they’re going to push you to feel more that way or they’re going to be like ‘nah, she shouldn’t go that way we’re going this way’ and you will be like ‘O.K. alright, I’m going there!’ because it’s just a give and take.”

A give and take, however, that is also based on the capacity of the musicians to bring to life what Christian Scott aTunde Adjuah refers to as the substance of music. The search of that way of playing that reflects each soul’s uniqueness, and the work on that. In terms of trumpet playing, it was also a journey for the Berklee student, who dedicated three years to find the sound that would make him different –even though that is not only what it takes to make real music. That is when he came up with the whisper technique.

“I decided that if I was going to eat, I was going to have to develop a sound that felt different from everyone else’s sound, which ultimately creates a value.”

Miles Davis had a clear sound. Hard and soft at the same time. Scott aTunde Adjuah asked himself ‘what is the opposite of that sound?’

A journey through Ben Webster, Clifford Brown, a lot of listening the advice of close friends.

“I talked to my uncle” – Scott aTunde Adjuah’s uncle is alto saxophonist Donald Harrisson, Jr – “and he helped me a lot. Listen, have you thought about dealing with what you’re doing with your throat, have you thought about dealing with the temperature of the instrument… and those were things I hadn’t thought about, and it took me almost three years to be able to whisper on command, but ultimately it was really about me trying to find a way of playing that didn’t sound like anything everyone else was doing, so that when people heard me they would always be able to identify my playing.”

Funnily enough, the trumpeter has lately walked away from this technique, as the music he is playing now contrasts a lot with the music he played earlier.

Today, his sound runs away from the standards –even though it always did. It has nothing to do with traditional schools of jazz.

Now, in the basement of a church in central Montreal, a base tone played from the computer kicks off. The drums suddenly hold on to it, followed by the piano. Hip-hop reminiscences, monotone sounds in spiral, blinks of the eye to the rhythm. Argument between the trumpet and flute. This is everything but conventional.

“It’s not a new idea. Jazz is stretch music, jazz is a fusion form. We’re not breaking the model, it’s just that we’re the first generation of musicians that get to do it in a post-global environment.”

So where is the jazz of it. What is the direction ?

“It becomes about what you’re playing for. Some musicians play for themselves: me, me, me. Other musicians can find a balance between playing for themselves and also communicating and speaking for people that are no longer here.”

In the middle of an expectant audience, Christian Scott aTunde Adjuah picks up the microphone: “This is a song from my grandfather”, he says. The trumpeter is the grandson of the legendary Big Chief, Donald Harrison Sr, who was Chief of four Black Indian tribes of New Orleans.  “This is a song about the gathering of nations and power”.

And so the drums start, powerful, fast, transcendent. The piano steps in and unites and creates a spiral of sound that goes up and up and higher and higher in crescendo, building a maelstrom, faster, faster, faster, in communion with a climax with the drums and the soft and so terribly urgent sound of the bass.  And so from that music, with black roots, with an energy that speaks the language of ancestors, the whole evolution of music talks.

“The question is – how do you bridge all these things together and play as yourself and as Louis Armstrong at the same time?”

“It’s a West-African concept called sankofa, which literally means go back and get it. It’s about when you are firmly in the present, facing forward, your core is facing forward, but your mind-set, your thoughts… Everything is actually looking back at the past, because everything we’re doing has been done before. So, it becomes about how do we continue to pull this legacy along but do it in a frame where the people that exist now, can actually relate to it and get down with it.”

A drop of sweat.

Lights pointing at the stage. Walls reverberate. The church upstairs captures the sound.

A whole row of spectators sitting on the tip of their seats.

A love in the air.

A connection is being made.

Just the instruments speaking their indescribable language. Just the musicians squashing their souls into sound.

Smile with their hearts and listen to the shouting and the ovations. Just like those people did, a minute ago, actively paying attention to their music.

The connection has been made.

“The sound of listening” – says Christian. And smiles.